For aircraft with variable-sweep wings, how unstable is it to have each wing in a different position?

Wikipedia presents this photograph of an F-14 Tomcat, with one variable-sweep wing swept forward and the other back: 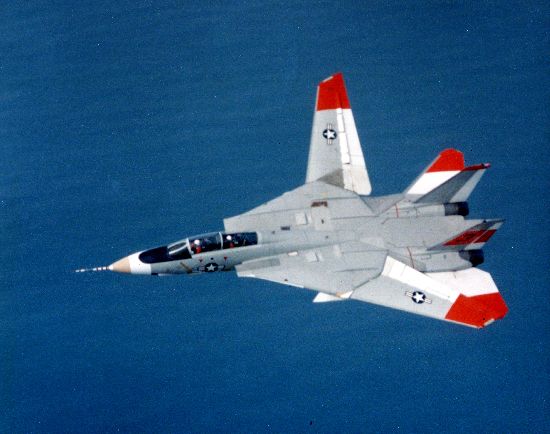 I was surprised to see that this configuration was possible; much less feasible or safe to fly with. My idle assumption, not being an aviator of any kind, was that this would be extremely unstable and difficult to handle. I would have assumed, given the prior assumption that the aircraft would be unstable, that the wings would have interlocks requiring them to be swept symmetrically, as a safety feature.

Is this photograph of a maneuver that is manageable and safe enough to perform routinely, or would doing this with the wings be an exceptional event or done only for testing? What kind of impact would this have on the aircraft's handling, given a forewarned, experienced pilot?

This was an intentional test run by Grumman in response to US Navy concerns about asymmetric wing sweep.

One of these [flight tests] was in response to concerns raised by the US Navy regarding asymmetrical wing sweep. No. 3 is best remembered for photo shown at right. A series of flight tests were conducted from December 19, 1985 to February 28, 1986. Grumman's Chief Test Pilot, Chuck Sewell, conducted several trials with the right wing locked in the forward position of 20 degrees, and positioned the left wing at 35, 50, 60 and 68 degrees of sweep in flight. 60 degrees was determined as the maximum for landing. In the event of an operational in-flight malfunction, Sewell found the aircraft to be acceptable for carrier landings in this configuration.

Evidently it was manageable, and safe enough that carrier landings were permitted with asymmetric sweep. There's no control available for the pilot of the Tomcat to intentionally asymmetrically-sweep the wings in flight, though.

How the handling qualities change I haven't seen reported anywhere. I agree with Robert DiGiovanni that you'd expect additional drag on the side with the extended wing, but the Tomcat has additional options on how to move spoilers and other control surfaces and it isn't clear to me if it can detect and respond to asymmetric sweep or if it's just up to the pilot to do so.

This appears to be a very fancy version of a side slip, which can be routinely performed with many aircraft. Note the ailerons are set to roll left, with the outstretched right wing providing drag to yaw right. It is doing the same job right rudder would do.

I would not do this particular maneuver too slow, particularly in that plane, where spin recovery would be more difficult. But a well trained pilot would be in a safe enough envelope for a few photo shoot takes.

Not the answer you're looking for? Browse other questions tagged military wing-sweep or ask your own question.

4
How is a variable sweep wing constructed?
2
Could a variable sweep aircraft also use negative angle?
32
Why did the DC-3 have wing sweep?
1
How do I choose the correct params?
2
How does a variable-sweep-wing aircraft keep wing-mounted payloads straight?
3
Comparisons between the A340 and 747-200 wing: sweep angle and span