Can a 737NG still fly when every single electric run device/system is dead?

So, as my title suggest, I wonder if the 737NG can still fly without any of it's electric run systems, which means anything that runs on electricity is dead.

TLDR: Yes, the 737 can still fly, the gear can be lowered and one can brake after landing.

A complete failure of every single electrical system is extremely unlikely. The QRH (Quick Reference Handbook) does not even mention this case. Usually, at least the battery remains and can power all emergency systems for at least 30 minutes (60 min, if 2 batteries are installed). See also What happens with the avionics if in midair there is loss of power or fuel flow interrupted?.

Even in the unlikely case of a complete electrical failure, the aircraft is still flyable. As long as hydraulic pressure is still available, the flight controls would function normally. But even without any hydraulic pressure the aircraft can be controlled via manual reversion. This means the mechanical link of the flight controls to the hydraulic actuators at the control surfaces can transmit the forces to the control surfaces (similar to what happens when hydraulic power steering fails in your car). The forces required will be substantially higher than usual, but the aircraft is flyable. Also manual pitch trim via the trim wheel in the cockpit is still possible.

Some things to consider:

Without any hydraulic pressure, the following components are inoperative:

Roll rate will be reduced and speedbrakes will not be available in flight.

The trailing edge flaps can be operated with the alternate electrical system. Alternate flap extension time to flaps 15 is approximately 2 minutes.

The leading edge flaps and slats can be extended with standby hydraulic pressure. Once extended, they can not be retracted.

Landing distance will be increased.

Inboard and outboard brakes have accumulator pressure only. On landing, apply steady brake pressure without modulating the brakes.

Do not attempt to taxi the airplane after stopping. 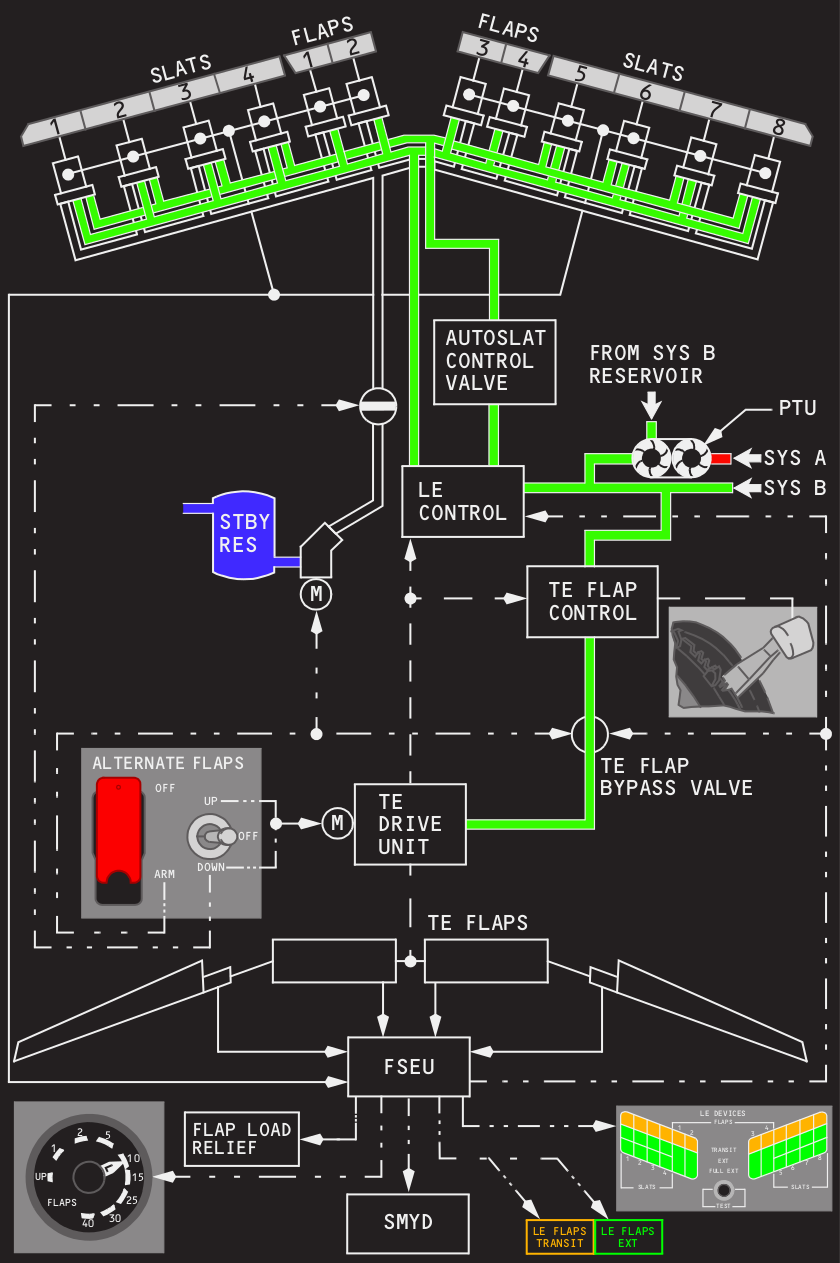 Not the answer you're looking for? Browse other questions tagged boeing-737 aircraft-failure failures or ask your own question.

10
What happens with the avionics if in midair there is loss of power or fuel flow interrupted?

13
When Boeing designed the 737NG, what factors influenced the change in the flap system?
22
Why doesn't the 737 have a fuel dump nozzle?
2
Is the 737NG hydraulically controlled or electronically controlled?
22
How many parts does the latest-generation 737 share with the original 737?
6
How is device control software checked for quality?
5
Why do the A320’s primary flight controls have hydromechanical backups only for the rudder?
4
Can the Master Caution illuminate without the System Annunciator Panel on the 737NG?