how does the rudder work? [closed]

What do you know about yaw control and more precisely about the result caused by the rudder (R on picture)?

Below the right pedal of the airplane has been depressed, and the rudder creates a rotation around the yaw axis and generates an aerodynamic result (R on picture) to the left on the vertical tail. Can you develop how this result is create? 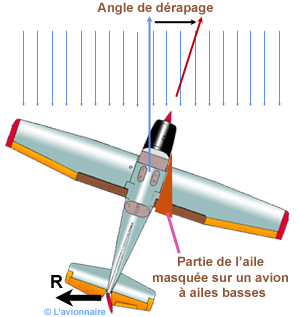 When the rudder is deflected, it creates a "lift" on the vertical tail due to additional camber. This "lift", when viewed from the airplane perspective, is a side force opposite to the direction of the rudder deflection. Since the centre of pressure of this side force is aft of the centre of gravity, it generates a net yaw moment on the airplane.

For example, a right rudder deflection generates a left side force, which generates a nose right yawing moment, pulling the aircraft nose right.

Since the side force is relatively small in the big scheme of things, the airplane motion is essentially unchanged. As soon as the airplane nose begins to yaw, the airplane begins to have finite sideslip against the incoming airflow. This sideslip generates a side force that opposes the rudder force (from an increased airflow incidence against the vertical tail), as well as a yawing moment that opposes the yaw moment from rudder (i.e. a restoring moment).

For a finite rudder deflection, the airplane begins to accumulate sideslip, until such a point that the restoring moment balances out the rudder moment.

If you press the left rudder pedal, the plane will yaw counter-clockwise.

The rudder, being a vertical variable camber wing, applies a left lift force when displaced right. The left lift force yaws the plane right and also applies a force trying to slew the plane to the left. The yaw results in the relative wind striking the side of the fuselage, creating a certain amount of lift to the right, depending on how effective an airfoil the fuselage is (some more than others). The lifting force applied to the fuselage is added to by the offset thrust line due to the yaw, also providing a lateral force to the right.

The result is the side lift of the fuselage plus the offset thrust line is more than the left side force of the rudder, and the plane slips sideways to the right, and since it's going forward as it does so it turns, although inefficiently. 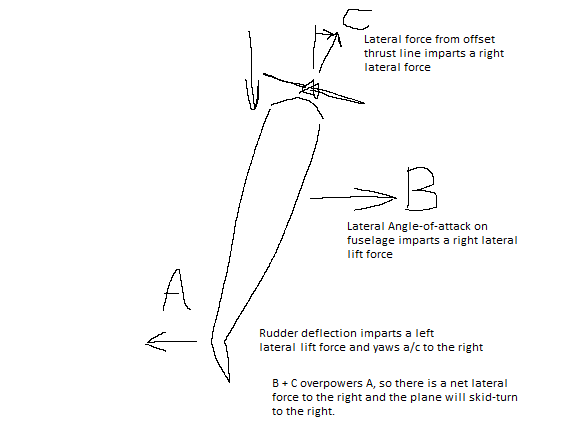 It's easier to visualize if you think of an aerobatic airplane in an airshow that flies past you flying at a 90 degree bank, or flying "knife edge". The wings are completely unloaded and are doing nothing except acting like big fins. The offset thrust line of the high powered engine, and the lift generated by the plane's fuselage, is enough to hold up the entire weight of the plane, even though the rudder at the back is pushing "down" like an elevator on a flying wing.

Roll the Extra aerobatic airplane back to level flight and do the same thing, and you get a skid-turn to the right from the rudder pushing the tail to the left. 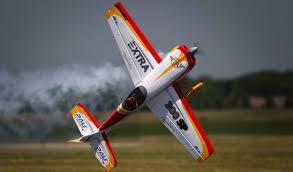 A very simple explanation here. Turning the rudder to the right is initially very similar to turning the rear tires of a forklift to the same direction.

It will make the plane tail pull left and creates the yaw.

Of course soon the similarity ends because of the interplay of fuselage with the wind and the fact that rudder forces want to roll the plan counterclockwise around its length.

But that image should give an intuitive motivation.

Not the answer you're looking for? Browse other questions tagged aerodynamics airplane rudder yaw or ask your own question.

1
How does sideslip indicator react during crosswind?

6
What happens after a rudder hardover?
5
How is a sideslip maintained (aerodynamically)?
5
Why the need to use right rudder during stall recovery?
5
What makes the F/A-XX twin-engined tailless fighter controllable with engines out?
6
Do aerodynamic forces and moments change aircraft pitch and yaw in the same way?
18
Why does the C-2 left inboard stab not have a rudder?
1
How to deal with turbulence while flying glider? (Cautions in applying rudder)
16
Why not use the yoke to control yaw, as well as pitch and roll?
1
What differentiates the entry procedures for spins and snap rolls?