Where does an FMS wind information comes from to calculate V approach?

To calculate the V approach the FMS is using a wind either taken by the ADIRS or inserted on APPR PERF page. At first I will say that it takes the wind inserted by the crew, but I am not completed sure about this assumption since the MINI FUNCTION on A320 will need as well wind info taken by ADIRS to be able to cope with sudden loss of headwind / increase tailwind.

It uses the wind entered in the PERF APPR page to correct the computed VAPP:

Takeoff, performance and go around speeds

The FMGC uses the performance model and either the predicted landing weight or the current gross weight at transition to the approach phase to compute approach speeds (VLS, VAPP, F, S, Green Dot). On the PERF APPR page, the selected LDG CONF determines the applicable VLS and VAPP, the latter being updated by the WIND correction that the pilot enters on the same page.

The approach speed that is shown on the MCDU performance page is based on the pilot entered wind or in Airbus terms, tower head wind component. The headwind component is the one which affects the aircraft energy on the approach.

The approach speed also known as Vapp is calculated as follows:

Vls (lowest selectable speed or Vref in landing config) + 5 knots (for autothrust) + 1/3 headwind component (limited to a maximum of 15 knots).

The ground speed mini (GS mini) function uses this calculated Vapp as a minimum approach speed to vary the approach speed with changes in headwind component. And yes, you are absolutely correct. The live wind direction and speed data is fed to the FMGC by the ADIRS. From this data, instantaneous headwind is computed by the computers and the approach speed on the speed tape is varied. The autothrust then adds or reduce thrust to keep the target speed. The GS mini uses the aircraft inertia to vary the approach speed. For example, if there is an increase in headwind, because of inertia, the aircraft tries to increase its indicated air speed to prevent a reduction in ground speed. This change in speed then becomes the new Vapp and thrust is added to maintain the Vapp. The idea behind the GS mini is to conserve the aircraft energy. If there is a headwind and if it suddenly dies out, the speed reduces and a thrust increase is required to keep the speed from going close to the stall speed of the aircraft (Vref is just 1.23 x stall speed in landing config). When Vapp is increased with an increased headwind component, even when the wind speed goes down, the aircraft is maintained at a high energy state. The target speed then is changed to a lower value and thrust is reduced to match the new wind conditions. It is a very interesting sight to see the aircraft Vapp target moving on the speed scale of the PFD on the approach. This is very noticeable in windy approaches. 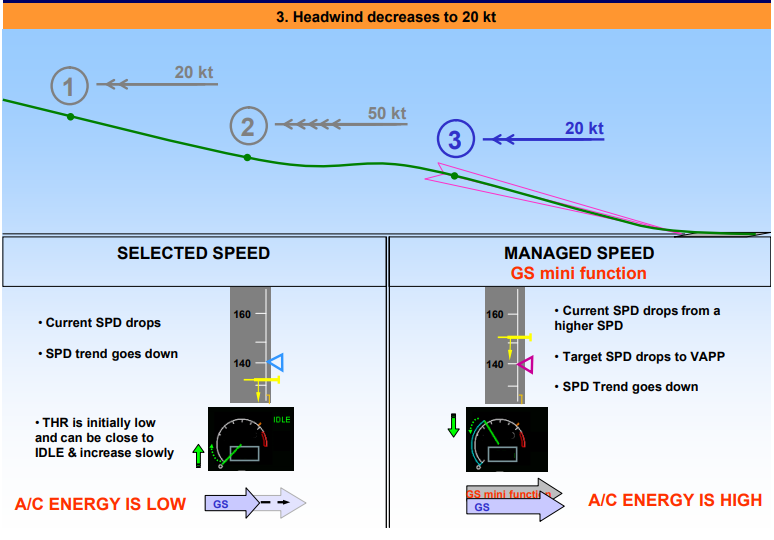 In a conventional aircraft, when we fly gusty approaches, we add about 10 knots to our Vref, in order to compensate for any reductions in wind speed. The GS mini is a more accurate version of this as it varies approach speed based on the actual prevailing winds. For GS mini to be active, the pilots must use managed approach speeds and autothrust must be engaged.

Not the answer you're looking for? Browse other questions tagged airbus-a320 approach v-speeds fms or ask your own question.

10
What is the FMS Bridge Visual 28R approach at SFO?
23
Which trigonometric algorithm does an FMS use to determine distance between waypoints?
10
How does an FMS shift after losing all external navaids?
7
How does the FOVE system work with the Airbus FMS?
4
Where does the transponder read altitude, or does ATC get it from radar?
7
Where does the factor 1.3 for Vapp come from?
2
How does ADS-C and FMS relate to FANS?
1
Where to find general A320 E&E Compartment Information?
4
Does the A320's FMC automatically adjust the rate of descent on a non-precision approach?
2
When does the FMS in the 737NG switch to approach mode?