Why do shockwaves progressively move aft as speed increses?

As an airfoil moves from subsonic to supersonic, the shocks that develop over the surface move progressively toward the trailing edge. What is the physical explanation for this behavior?

As a side question, what determines where the shock (and hence location of minimum pressure) is located? 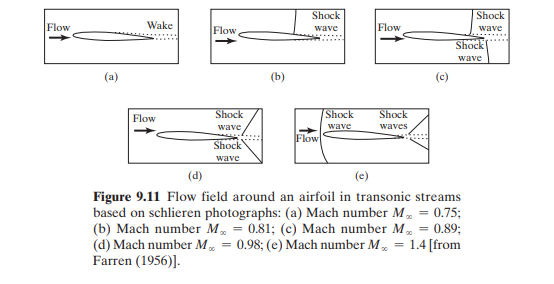 The answer is deeply rooted in the theory of compressible fluid dynamics, so for a fully satisfactory take on the matter you might want to refer to a textbook on that topic (such as Thompson or Shapiro). I will try to give a qualitative explanation.

For our discussion here, let's consider a shockwave as the way to abruptly slow down a supersonic flow and recover pressure; abruptly, because, since disturbances cannot propagate upstream in a supersonic flow, the flow has no way to "know" that the disturbance is coming and it isn't able to "smoothly" accomodate it (as it happens in subsonic flow). A disturbance here is, for example, the presence of the airfoil and its effect on the velocity and pressure fields.

Let's have a look at your picture. In a) the flow is subsonic everywhere and we have no particular issues with that (although we might want to consider some compressibility corrections). Now, the flow accelerates over first portion of the upper surface of the airfoil, so the speed of the flow there is greater than the speed of the free stream flow (and greater than the speed on the lower surface, so we can have lift). We can see that for free stream Mach numbers $M_\infty$ (ie flight speeds) close to 1 the flow over the upper surface can actually reach local Mach number $M$ of 1 and even above, because of that acceleration. This is exactly what has happened in b): here $M_\infty$ is greater than the critical value (usually given as 0.8) and there is a supersonic bubble right there in the middle of the upper surface. The flow downstream, however, is still subsonic, therefore it has to slow from the supersonic condition it reached and to do so a shockwave appears. This shockwave usually interacts with the boundary layer, adding a very high adverse pressure gradient to the one already experienced towards the trailing edge, so the boundary layer will most likely separate, leading to stall.

As we increase the flight speed, more and more of the flow over the airfoil becomes supersonic, also on the lower side, therefore the shockwaves "travel" downstream until, close to $M_\infty = 1$, the whole flow on the airfoil is supersonic, as in d).

For even higher flight speeds, a detached shockwave appears in front of the airfoil: the purpose of this wave is to "turn" the flow around the airfoil. As the flow is supersonic, this turning of the flow can't happen "smoothly", but like we said it is the shockwave that abruptly accomplishes it. The flow behind this curved shock is still supersonic (except for a region right around the nose of the airfoil) so later downstream we once again find the shockwaves which help the flow go back to its undisturbed free stream conditions. The detached wave significantly increases drag; in some application this is optimal (eg in the atmospheric re-entry of a spacecraft), but it is detrimental for supersonic flight. This is why supersonic airfoils are designed to have a sharp trailing edge, so that the turning of the flow can be accomplished by oblique shocks attached to the edge, resulting in less drag.

As to answer your last question: where does the shockwave position itself? The answer lies in the boundary conditions, that is to say the conditions that have to be restored downstream of the airfoil: these will be the free stream speed and pressure. Without going into much details about the variation of pressure with velocity in compressible flows, let's just say that the shock position is such that afterwards the flow has enough "space" left to recover subsonically. So, say you have to recover to a pressure of 1 to the freestream pressure of 10 (random numbers with no meaning) at a certain distance downstream from the airfoil: if the shockwave increases the pressure to 6, it will be positioned in such a way that after the shock (where the flow is subsonic) there is enough space for the pressure to increase "smoothly" (subsonically) by 4 and restore freestream conditions at that distance. The increase of pressure across a shockwave is given by the shock strenght and can be seen as proportional to the Mach number, so at higher Mach the shock is stronger, the pressure recovery is higher and the shock will position further downstream, since the flow will have less pressure to recover subsonically and can do so over a "shorter" distance.

With a higher flight velocity (still subsonic), the supersonic pocket on the upper side of the wing starts earlier and takes longer until it collapses into the shock. That is quite normal, as the speed over the whole upper wing is increased with increasing flight speed.

Think of what happens at the extreme case of accelerating flight speed towards Mach 1: Now the shock will move towards the trailing edge with increasing Mach number and will stay there once the flight speed is above Mach 1 (NOTE: This is valid only for straight wings; correct the Mach number upwards for sweep effects).

Things become nasty when the shock interacts with lift creation and starts to fluctuate back and forth - this creates a buzzing sound and might even cause flutter. The mechanism is that the stronger shock causes flow separation and lift loss, which in turn shrinks the shock, which allows lift to recover so the shock grows again. With the growth, the shock moves back and jumps forward when it becomes weaker. This back-and-forth jumping of the shock creates not only a fluctuation of lift, but also of pitching moment.

Not the answer you're looking for? Browse other questions tagged wing supersonic shock-waves transonic fluid-dynamics or ask your own question.

6
What would the density profile of this shock wave look like, roughly?
3
What are the effects of shockwaves on normal and supersonic aircraft?
5
What is the highest and lowest air pressure induced by an aircraft at supersonic speeds?
10
Why do wall-to-wall airfoils in wind tunnels produce no (or infinitesimal) downwash?
10
Why do some Mach trimmers move the elevator?
1
Is high speed buffet possible at supersonic speed?
1
How does wing shape impact shock structure?
1
Why doesn't a wing in supersonic flow produce a shock that results in flow parallel to the leading edge?
1
How do the shockwaves (supersonic and hypersonic) interact with the structure?