Does a dual-rotor helicoptor like the Chinook transition from hover to forward flight differently than a single rotor helicopter?

I watched this video of an RAF Chinook taking off vertically and transitioning to forward flight.

I'm curious if the method for increasing lift to move forward, controlled by the cyclic in a single rotor if I'm not mistaken, is different when you have two rotors along the length of the aircraft. My untrained assumption is that to lift the rear of the helicopter and start moving forward, you would increase power or the collective on only the rear rotor.

The cyclic (dubbed control stick for the CH-47) takes care of that, not separate collectives (there's only one collective for both rotors per seat).

The CH-47 Chinook is a heavy maneuver and assault helicopter manufactured by Boeing. Its two tandem rotors (set of horizontal rotors mounted one in front of the other) are counter-rotating and are controlled synchronously in stationary and in translation, thus their torque effect is canceled out by their opposite direction of rotation. It is equipped with two turboshaft engines with a power of 2,850 hp to 3,750 hp,(help to moving forward) with a maximum weight of 18.5 tonnes. Photo below we see that the rear rotor is raised relative to the front rotor. 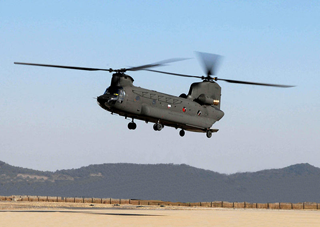 an asymmetry of the lift between the 2 rotors implies a tilting along its pitch axis and causes the device in forward flight.the tandem rotors are very bulky and not very maneuverable, which constitutes their main defect. Note also that the lengthening of the fuselage makes them more sensitive to strong wind

So it's mostly like an helicopter with one rotor( cyclic variation to move forward) but a few different.your hypothesis is not really right because the two rotor are connected and are controlled synchronously in stationary and in translation(same speed) The main MGB gearbox is interconnected with the shafts of the two turbine engines. A seven-section shaft connects the main gearbox to the front gearbox, and a two-section shaft connects the main gearbox to the rear gearbox. The oil cooling fan is driven by the rear gearbox.

Longitudinal control of tandem rotor helicopters is accomplished by differential thrust of the forward and aft rotors creating pitch attitude changes of the fuselage about its lateral axis.

Lateral control is accomplished by the lateral tilt of both rotor discs, which causes the fuselage to roll about its longitudinal axis 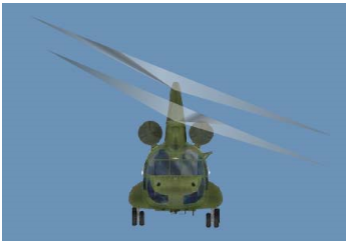 Directional control is accomplished by differential lateral tilting of both rotor discs, which causes the aircraft to turn about its vertical axis.

Not the answer you're looking for? Browse other questions tagged helicopter rotorcraft ch-47 ch-46 or ask your own question.

21
Why does a helicopter need cyclic control rather than just tilting the whole main rotor?
28
How does a coaxial rotor helicopter achieve yaw?
18
In helicopters, why not have electric motors controlling blade pitch?
8
Does the main helicopter rotor blade shape affect noise?
4
Can a helicopter like the R44 be lifted up by his rotor head?
19
How does this RC helicopter keep itself upright?
6
In a helicopter does forward flight produce a rolling moment?
3
On the Ka-50 coaxial helicopter, why does the bottom rotor flap up on the right side instead of in front during forward flight?
3
How does gross weight affect helicopter autorotation?