How do airlines train their pilots to deal with the stress of delays?

There are some good answers here dealing with boredom during long flights and with the physical stress of piloting, and with what pilots to do during a delay. I'm interested in how pilots cope with the mental stress of delays.

Consider - you're flying home, you've been sitting on the tarmac for three hours with no idea of when you're going to be cleared to take off, and your child has a birthday party you really want to make. Another five minutes and you're going to have head back to the terminal because of the mandatory rest period; the tower starts to give clearance to the planes in front of you but they seem to be taking an interminable time to complete their checklists.

These are the sort of things you face as a passenger; luckily for most of us they're pretty infrequent.

For a pilot, however, they must be quite regular, especially on certain routes. And the added complication is that the temptation to rush or cut corners could lead to disaster.

Do airlines have specific training on how to cope with the stress caused by situations where they will find themselves under time-sensitive / delay pressures? 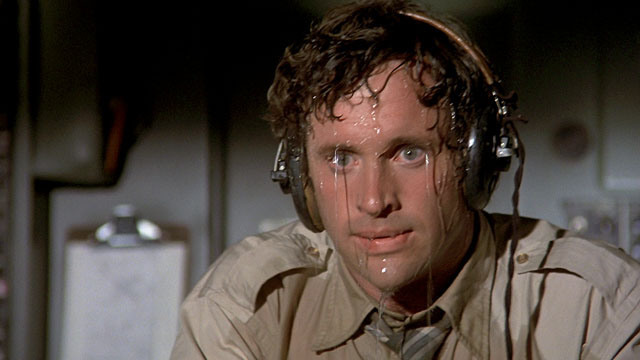 Robert Hays under pressure in Airplane!

(My answer is limited to carriers based in the USA, things can be very different in other regions, many countries pay monthly salary and culturally have different view of company expectation verses safety expectation)

Pilots are paid per hour of block time, they are getting paid for all that time waiting on the taxiway after leaving the gate and starting an engine. The flight plan will usually include an extra hour or two for flying to an alternate airport if the weather turns bad at the destination airport, this is not commonly used with modern forecasting but it is part of the plan. So generally a pilot should not have a strong financial motivation causing delay stress. If a poorly timed childrens party is causing distraction then my opinion is that the company should consider strongly encouraging this pilot find a less safety critical career.

Pilots in the USA in recent years do tend to get a lot of general stress-management guidance during training, even a fair bit at the private pilot level.(depending on the school) Often this training is lumped under labels like "Human Factors" or "crew resource management", and FAA materials even include specific advice for avoiding situations just as described in your question they call it "get-there-itis". The free FAA materials tend to be a bit superficial but better than nothing in calling attention to a possible problem, industry training courses on the other hand have some good depth. This type of training has been growing since the late 1960s, but it got a large boost in the early 1980s after the 1977 Tenerife disaster where a KLM captain apperently hot to make up for delays started takeoff without full clearance and slammed his 747 into a Pan-Am 747 taxiing in the fog, just at rotation speed, killing over 500 people.

As a pilot you get used to avoiding anything immediately after a duty. That's the best way to deal with it. The longest I've been delayed is 10 days during the ash cloud over Europe.

Most airlines do not give their pilots mental training. However, airlines may provide therapy sessions for pilots if they request for it, or decide that the pilot is not yet mentally prepared to fly. Pilots are also given mental screening. But other than that, airlines don't train their pilots for delays either because training is already too expensive, or they just don't expect that delays will happen.

Not the answer you're looking for? Browse other questions tagged commercial-aviation pilots medical or ask your own question.

40
How do long-haul pilots cope with boredom?
9
How do airline pilots relieve the physical stress and discomfort of sitting for long periods of time?
6
What do pilots do, when there is a long wait before take-off, after gates are closed?

35
How do airlines pay for their planes?
10
Do any airlines hire "pilots" with no previous flying experience?
7
How do commercial airlines prepare for pilots falling sick during the flight?
5
How do pilots cope with pressurization changes?
8
What causes the phenomenon that pilots don't believe their instruments, while they're working well?
3
May a commercial pilot transport an owner in the latter’s experimental aircraft for compensation?
9
How do airline pilots relieve the physical stress and discomfort of sitting for long periods of time?
0
How to deal with the noisy cockpit?
0
How do pilots manage their flight times?