How can I calculate the relationship between propeller pitch and thrust?

I am trying to design a WWI propeller so I started calculating. The propeller comes with a specified pitch of 1.75m. The engine is supposed to run at around 1900 rpm and 147kW. These are most likely not the maximums, but I use these values as a starting point.

I also found on the internet an angle of 16.88 degrees but the site mentions "angle of attack" which I deem incorrect. However if I treat the value as "effective pitch angle" I get about the same speed of ~195.68 km/h (using the formula from Koyovis for Φ from How to calculate variable pitch propeller parameters?).

Everything looks good, my reasoning at this point is that this prop is suitable to be used for the particular aircraft. The speed that I found seems to be reasonable for this aircraft.

But here comes the problem, this is the part that I don't understand and that is 'thrust': if the propeller reaches 1.75 pitch this means that the exit velocity - the input velocity (Ve - V0) is 0!

If I understand the formulas (such as here) correctly this means there can no longer be thrust. How would it possible then that the aircraft is still being pulled forward? This automatically means the aircraft has to slow down. But my assumption is that the propeller is 'designed' to go as fast as the specified pitch.

Can someone enlighten me please. Why does my propeller have to be slower than designed?

edit (I will leave my question above unaltered). Clarification as per request of JZYL:

The aircraft I am looking at is a WWI SE5a with a Wolseley W.4A Viper engine. It is difficult to state exact parameters. There is a lot of 'belief' of what the aircraft at that time could do. Some people say the aircraft top speed would be 138 mph (220 km/h). However might as well be one top speed ever recorderd for one plane at excellent flying contditions. Also some people claim the engine could run at 2200 RPM.

The calculations that I make do not add up. The "pitch speed" (I don't know what the official term is) that I have calculated for the prop is 199.5 km/h (124.6 mph) with these parameters.

112 mph is way below what people see as the maximum speed of the craft.

So I am basically trying to find a clarification for this.

The geometric pitch ($p$) is simply the distance that a point on the prop would move forward in one rotation, if it's gripping in a solid medium. You can derive the pitch speed via this geometric relation if you wish, but I would caution against inferring performance from this number. Instead, you should consult propeller, engine and aircraft performance in their entirety.

Using your provided data, let's see if everything fits. We assume:

From this reference, the reference pitch angle/blade angle ($\theta$) by convention is measured at 3/4 of the blade radius, and can be related to pitch via:

The advance ratio is calculated, with $n$ being the prop rate of rotation in round per seconds:

Using the plot below as a rough reference, which is predicted for the McCauley 7557 propeller, gives a thrust coefficient ($C_T$) of 0.06. 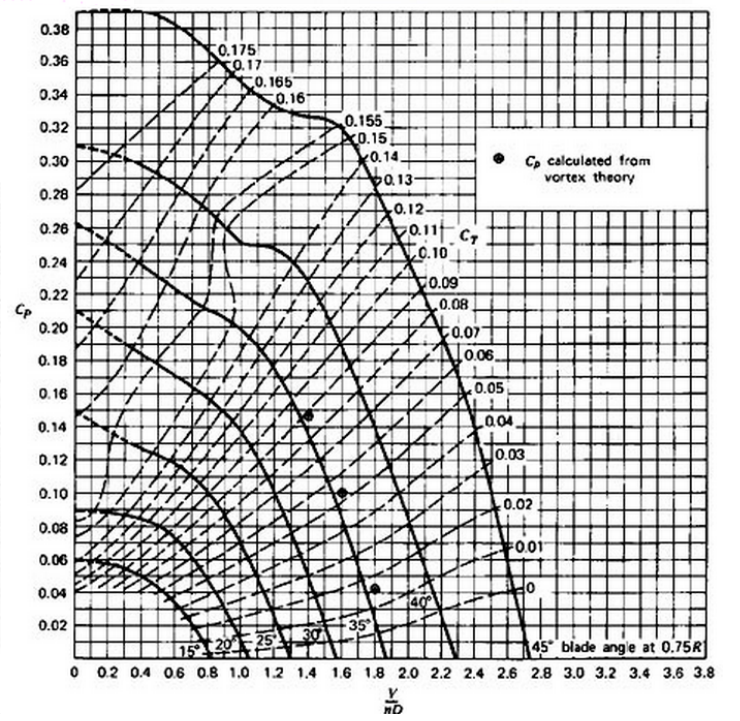 Now the thrust coefficient is defined as:

where $rho$ is the air density and $T$ is the propeller thrust.

For level flight, thrust equals drag, and we can back calculate the drag coefficient:

This is high enough to be well within the realm of possibility for a biplane (if it's too low, then it's an indication that the performance numbers do not jive). For reference, Cessna 172 has a total drag coefficient of 0.032 at 122kt at SL. In conclusion, I would say that your numbers check out in the back-of-envelope sense.

Not the answer you're looking for? Browse other questions tagged aircraft-performance propeller thrust pitch or ask your own question.

2
How to calculate variable pitch propeller parameters?
1
What is the definition of "geometric pitch angle" for a propeller?
1
Is "V/n" geometric or effective pitch in advance ratio formula?