Why do swept wings decrease the drag increase that occurs in transonic flows?

Swept wings are used in aircraft that fly in the transonic regime because they 1) delay the critical Mach number 2) reduce the drag increase that occurs (smaller drag divergence).

I am trying to understand physically why a lower drag is observed. A common explanation is that only a component of the free stream is perturbed by the wing (see: Why are swept wings better for breaking the sound barrier?), but this does not explain why there is a lower drag when shocks do occur over the wing.

More specifically, I understand why the curve below shifts to the right as sweep increases, but want to know why the drag is not as high. 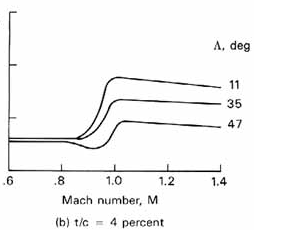 Shock waves form where air can no longer "get out of the way" and begins to compress.

Sweeping the wing effectively increases the chord and reduces the rate of wing thickness increases as airflow moves across it, essentially making the body longer and more "streamlined". Instead of running into a steep hill and compressing, it can flow over a more gently sloping barrier with greater ease.

What is most interesting is the decreasing drag of the 47 degree sweep at high subsonic. As sweep increases, airflow over the wing may transition from the classical front to back flow seen in straight wings to the deflected "spanwise" airflow of swept wings to the rolling vortices seen in highly swept "slender delta" wings.

At some combination of speed and sweep, airflow will roll up into a vortex rather than washing off the back or end of the wing. It may be that, at higher subsonic speeds, with greater sweep, the vortices roll into the back of the wing and push the aircraft forwards.

It has been thought the same thing occurs underneath thin undercambered wings, which may help account for some of their "magical" slow flight properties. Definitely worth studying.

As far as 11, and 35 degrees of sweep, they follow predictable patterns based on compression effects at transsonic speeds, as does the Area Rule.

Are swept wings better for breaking the sound barrier? Not really, as the X-1 proved. But they do significantly delay transsonic drag at high subsonic speeds.

Due to infinite span, the flow quantities along the swept coordinate ($z$) must be invariant. Therefore, the flow parallel to the wing sweep ($w_e$) must also be invariant and equal to the freestream component ($V_{||}$) everywhere.

Notice that the flow parallel to the wing sweep has no bearing on the pressure field; it's as if each wing section only sees the perpendicular flow. The same goes for effective 2D Mach ($M_\perp$), which is a net reduction from the freestream Mach ($M$) by a factor of $\cos\Lambda$. Since a reduction in Mach reduces the normal shock strength in the 2D section, or even removes the shock altogether, it leads to a reduction in wave drag compared to no sweep.

Below is the 2D drag curve vs. Mach for NACA 0012 from Euler solution. Local shock is obvious starting 2D free-stream Mach 0.65. This goes to show that decreasing effective 2D Mach lowers the overall wing drag via sweeping.

In a finite span wing, there will be gradient in $w_e$ that will lead to flow variation along the span. However, the principle of wave drag reduction through wing sweep readily applies.

Not the answer you're looking for? Browse other questions tagged aircraft-design aerodynamics wing-sweep transonic or ask your own question.

16
Why are swept wings better for breaking the sound barrier?

19
Why do some military aircraft use variable-sweep wings?
14
Why is the coefficient of drag for straight wings at supersonic speeds lower than for swept wings?
12
Can a supersonic plane use a subsonic wing if the nosecone shock produces subsonic airflow around the wing?
1
Why does transonic drag happen?
5
Why do 20-series Learjets have such an extreme susceptibility to mach tuck?
3
Why did this delta wing generate a lower Cl at a higher wind tunnel velocity?
0
Could an arrow planform be better for a supersonic aircraft than a delta? Why?
2
Why does the NASA X-57 need a "gust control system"?
2
How do coefficient of lift/drag variation with speed differs between swept and unswept wings?
2
Explained intuitively, why does aspect ratio affect induced drag?