Does this web page really correctly depict the angle that is called “incidence” in the French language in the aviation context?

Does this web page really correctly depict the most common usage of the term "incidence" in the French language in the aviation context, in the context of speaking of an entire aircraft and not just an isolated part such as a wing section in a wind tunnel? Is the label "incidence" really attached to the correct angle?

In fact the text above the diagram explicitly states "L'incidence est définie par rapport à l'axe de l'aéronef et non de la voilure.", which translates to something like "The incidence is defined relative to the axis of the aircraft and not of the wing."

Or is it just a matter of arbitrary convention, meaning that either usage would be equally appropriate?

(One way to concisely answer this question might be "The correct usage of 'angle d'incidence' in the French aviation context is exactly identical to the English-language usage of 'angle of attack' (or replace with other appropriate angle as needed) as noted in this ASE answer (give link)." Not all ASE answers have given the same perspective on the most correct usage of this term.)

Bonus question-- in the French aviation context, is the term "angle d'attaque" used to mean something different than "angle d'incidence"?

Yeah it's right if we consider that the relative wind is parallel to the ground.

In french: In fluid mechanics, "l'angle d'incidence" is the angle formed by the chord of a profile and the relative wind speed vector. In English l'angle d'incidence" is called angle of attack (AOA). Attention, angle of incidence in English corresponds in French to the "angle de calage", the angle formed by the reference chord of a wing and the longitudinal axis of the aircraft. L'incidence (fr) notes : α 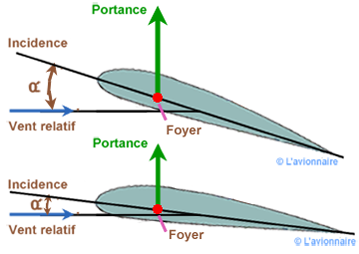 "Croisière" is cruise flight .the picture of the website is not clear because it confusing chord line and longitudinal axis(perhaps to simplify)... other important notion: RELATIVE WIND is the relative movement of air relative to the plane; it is ALWAYS PARALLEL AND SENSE OPPOSITE to the TRAJECTORY OF THE AIRPLANE(path)

Source: (the second link is french because the same page is different in French and in English) https://fr.m.wikipedia.org/wiki/Incidence_(a%C3%A9rodynamique) https://www.lavionnaire.fr/AerodynCPFoyer.php

Not the answer you're looking for? Browse other questions tagged aerodynamics terminology aircraft-physics angle-of-attack flight-mechanics or ask your own question.