How much torque can a Boeing 747 apply when pitching?

I know this is a weird way of thinking about / quantifying this, but I'm trying to figure out how much torque a 747 can apply to itself when it pitches upwards (turning about an axis from wing to wing, with the nose moving upwards). I figure it's equal to the lift times the distance between where lift is applied to the wings and the axis of rotation, but I haven't been able to find this data.

For a given set of parameters, you need to know the All Up Weight, the Center of Gravity location, and the Neutral Point, which is the location of the (gaseous) fulcrum the tail has to work about. The NP is defined as the longitudinal point at which pitching moments are zero, the "effective" balance point in other words, taking into account the center of lift plus/minus the effects of various pitching moments (airfoil pitching moment, fuselage lift, nacelle lift, thrust effects, flaps and gear hanging down, etc.) which result in the actual net downforce the horizontal tail has to produce to "hold the nose up" in a given steady state flight condition.

If you know the CG location and the all up weight, then the "torque" acting on the fuselage at the Neutral Point is simply all up weight times the distance between the CG and NP.

So if the plane weighed 700,000 lbs, and the CG was 20 feet forward of the NP (just a wild guess; I have no idea the actual number), the "torque" value, the nose-down pitching force acting at the NP, is 14 million foot pounds. If the aerodynamic center of the tail was 120 ft aft of the NP (another wild guess), that works out to 116666 lbs of downforce required for stable level flight back at the tail. Of course if you now pull pitch to raise the nose, you are accelerating the mass about the lateral axis now, so those forces go up temporarily. 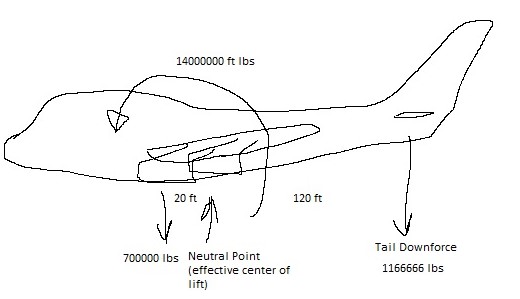 As far as finding out what is a typical Neutral Point on a 747, good luck with that...

Having been a commercial pilot and instructor for over 36 years I deal with this daily. The 747 or any aircraft is essentially balanced at the center of gravity. The positive moment will equal the negative moment on the cg. The aerodynamic force created by the horizontal stabilizer is easily calculable and is based on the lift coefficient, surface area of the airfoil, velocity, air density (rho), The forces can range from mere hundreds to thousands of pounds of force applied to the arm depending on these factors. By the way the cg is generally about 17 to 25% of the mean aerodynamic chord of the 747 measured from the leading edge of the airfoil at the root.

Once the moment (torque) is calculated then pitch acceleration rates based on weight can be determined. Rates of pitch are only of interest to pilots as they relate to controllability and stability so we don’t worry about actual axial acceleration rates. In this regard the farther to the rear the calculated cg is within the acceptable range (in relation to the center of lift) the more controllable and aerodynamically unstable the plane will be due to moments being closer to equal. The farther forward, the more aerodynamically stable and more difficult to control (greater required forces) it will be due to greater nose down moment.

By the way, most planes are designed to fly with some nose down moment due to loading. This creates a more stable aircraft. The cg range is always ahead of the neutral point. In theory, were it not for the necessity to longitudinally stabilize the aircraft very little horizontal stabilizer force would be required. So a small amount of down force is necessary to stay in level flight, by design. This additional downward force adds to the weight of all forces acted upon by the total lift forces.

I assume you are asking about the NET aerodynamic pitch torque that the 747 can generate. In this case the pitch torque created by tail just to maintain linear flight doesn't count. Nor does the pitch torque created by the tail to overcome "aerodynamic damping" in the pitch axis during a steady-state (constant airspeed, constant bank angle, constant turn rate) turn. All that matters is the maximum possible rate of change of the pitch rotation rate, and the aircraft's moment of rotational inertia in the pitch axis. That is all the information that we need to solve the problem. Any approach based on other information will lead to a much more complicated solution.

But even boiled down to these simple terms, the problem is very challenging. It is very difficult to determine the maximum possible rate of pitch rotation. This is perhaps best determined by experiments in a very accurate simulator, or in the actual aircraft. Caculating the moment of rotational inertia in the pitch axis is trivial compared to determining the maximum possible rate of change of pitch rotation.

Is it possible to have a stable aircraft (aerodynamically) in a condition where stabilizer updore is necessary for level flight?

No. Not by the definition of static or dynamic stability.

There are two systems that have to be considered. The first is the wing itself. The airfoil has a center of pressure that moves fore and aft based on angle of attack. It also produces a downward force center of pressure due to Bernoulian and Newtonian forces on the bottom of the wing. The upper and lower centers of pressure are not physically opposite of each other and therefore produces either downward or upward torque on the wing itself. This torque is centered on the mean aerodynamic center. The MAC does not move regardless of AOA. It it through this MAC that the center of lift operates.

Now take this wing with Its own system of balances and forces and attach it to a plane with its own balances and forces. The CL will be behind the CG on most aircraft for stability purposes. Only when the CL and CG are at the same point will the NP be near the CL/CG point. Since weight and speed determine necessary AOA, and AOA effects CP, drag, and stabilizer AOA the NP (or point where no stabilizer force is required for level flight) will never remain in any one location but will be at a different point based on a given set of conditions. The odds of the CG and NP ever being and staying the same are improbable.

As to how much torque is required....torque is torque. You can simple calculate the moments of a plane that is balanced. The force required to move a 400,000 lb airplane about its CG will be a matter of F=ma. That will give rate for a given force. Calculate the force capable with a 747 stabilizer (per L=ClrhoV^2*S) and apply it to the force formula and that should be close to the rate or rotational movement around the lateral axis. My angular momentum physics may be a little rusty.

Angle of incidence also plays into this. Most airplanes have a positive AOI. A B727 had an almost 1.5 degree down AOI.
That’s why it always flew nose up compared to other planes

Not the answer you're looking for? Browse other questions tagged aircraft-physics boeing-747 pitch or ask your own question.

31
What is the difference between centre of pressure, aerodynamic centre and neutral point?
17
Do any airplane designs exist that don't involve a flight surface that provides downforce?
1
What has happened to make me experience negative G with the control stick FULL AFT near the top of a loop?

27
What is the maximum safe bank angle of a 747?
23
Does lift equal weight in a climb?
21
How does the F-35B not flip over during transition?
1
How much force is produced by control surfaces?
1
How does the airflow above an airfoil account for the downward turning-action of the airflow below the airfoil?
2
Explained intuitively, why does aspect ratio affect induced drag?
1
Center of Gravity and Center of Lift stability