Is a "stalled" aircraft free-falling?

If I was in an elevator in a sky-scraper and the cable broke, I would free fall and feel weightless until hitting the ground. When I cause a stall on an airplane (power-ff) and the wings stop producing lift, why doesn't the same effect occur?

In addition, lift doesn't just drop straight to zero when the wing stalls (no matter what it might feel like to the pilot). Here's the lift-to-angle diagram for a typical wing: 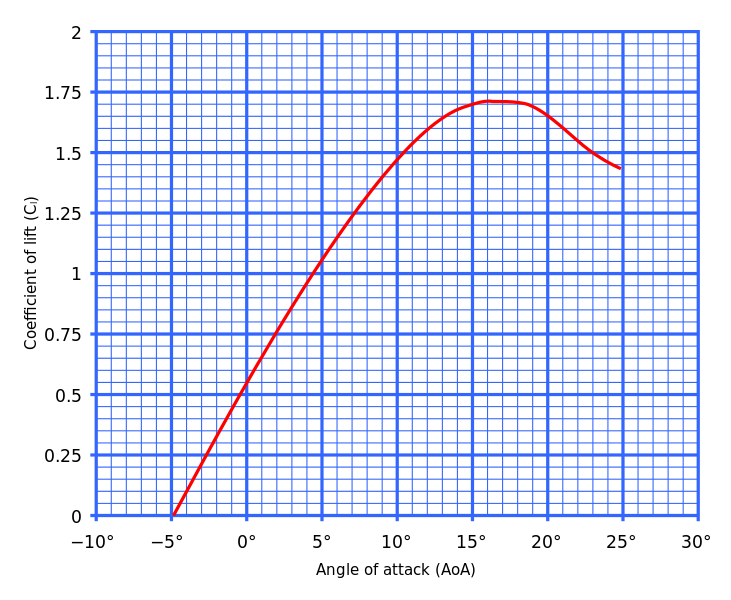 This wing stalls at about 16° AoA. But notice that the coefficient of lift doesn't simply drop to zero, it just starts descending at that point. So even in a stall, the wings are still generating some lift, just not enough to overcome the weight of the plane.

Is a “stalled” aircraft free-falling?

If I was in an elevator in a sky-scraper, and the cable broke, I would free fall and feel weightless (until hitting the ground of course). When I stall an airplane(power-off) and the wings stop producing lift, why doesn't the same effect occur?

Because in a stall, the aerodynamic force component acting against the direction of the weight vector is not actually zero. In fact, after a very short time it becomes equal to the weight vector, thus yielding a steady-state situation in the vertical plane. Lift and drag, as conventionally defined, both contribute to this aerodynamic force component; lift is by no means zero even in stalled flight. In a stall, you are definitely not free-falling. You are just flying along a very poor glide ratio or descent ratio. After the first few seconds, you are no longer accelerating. An aerodynamic force exists that not only limits the rate of downward acceleration, but also yields a specific downward terminal velocity, as well as as a specific forward speed.

A stall is not a free-fall. It is a loss of laminar airflow over the wing, resulting in a loss of lift. The response to a stall is to stop the (usual) roll induced by one wing stalling before the other. Then drop the nose - most aircraft will do this by design - until you achieve a flyable speed with proper airflow over the wing. The problem here is that you may not have enough altitude to reach that speed >> crash. I once stalled and dropped from over 25000 (not looking at altimeter) to under 12000 before I had enough airspeed to pull up. With the resulting pucker factor I bottomed out at around 7000 ft.

Speaking as a commercial pilot, pilot instructor and skydiver I think I can answer this.

Even if you hold the aircraft in a stall at the buffet, the wing will still drop and attempt to fly again repeatedly. So, you're never in freefall, which would assume terminal velocity, you're just pitching up and down as you move forwards in the stall.

Freefall, as a skydiver, implies no forward movement and no lift, even though many skydiving diciplines do involve both such as tracking, wingsuiting and even formation, where you de-arch to slow yourself down and rise relative to others.

Skydiver1Skydiver1
1
$\endgroup$
Add a comment  |
Highly active question. Earn 10 reputation (not counting the association bonus) in order to answer this question. The reputation requirement helps protect this question from spam and non-answer activity.

Not the answer you're looking for? Browse other questions tagged aerodynamics aircraft-physics stall or ask your own question.

8
How do I achieve a lower stall speed, and capture potential CLmax without enough elevator control authority?
7
Will a stalled aircraft fall down like a brick? Or how steep does the Lift-AoA curve fall off after stall?
16
Is there an abnormal condition that could have caused this fatal accident involving a stall?
3
Would the front rudder of the Wright brothers really have helped in recovering the glider from a stall?
0
What is the total EXTRA lift produced using an 80 deg flap and distributed propulsion?
2
Why do the two different "ground effect"s used by aircraft and automobiles do opposite things in almost the same conditions?
1
What is the purpose of downthrust?
4
What's the difference between an accelerated stall and a dynamic stall?
1
With 77% less wing area than the Lazair Ultralight, how does the Blackfly meet FAA ultralight category requirement of power off stall speed of 28mph?