Can foreigner fly model aircraft (quadcopter) in US without being part of an organization (like AMA)?

The title says pretty much all. I'm visiting Guam very soon and I just found out the FAA is enforcing some rules that are mostly common sense. However, one rule states "the aircraft is operated in accordance with a community-based set of safety guidelines and within the programming of a nationwide community-based organization;"

I have read the rules of AMA, but if i'm not registered with them, does this mean I can't fly my quadcopter in US territory? (non-commercial flight)

This answer reflects the referenced rules but does not necessarily include all laws that may apply in this situation.

The wording on the picture included in this answer is confusing. If you go to the wording of the bill, it says that the FAA:

(2) the aircraft is operated in accordance with a community- based set of safety guidelines and within the programming of a nationwide community-based organization;

So this bill does not prohibit you from doing anything, it just says that the FAA can't make a rule specifically about model aircraft that applies to you as long as you are operating according to those rules. You still must follow any other general rules about aircraft. See the interpretation of the rule, as linked from the answer on that question, which says:

Thus, based on the language of the statute, we conclude that aircraft that meet the statutory definition and operational requirements, as described above, would be exempt from future FAA rulemaking action specifically regarding model aircraft.

Thus, the rulemaking prohibition would not apply in the case of general rules that the FAA may issue or modify that apply to all aircraft, such as rules addressing the use of airspace (e.g., the 2008 rule governing VFR operations in the Washington, DC area) for safety or security reasons.

The FAA permits aircraft operations below 500 feet when flown over open water and in sparsely populated areas. 14 CFR 91.119(c). Such operations may not be conducted “closer than 500 feet to any person, vessel, vehicle, or structure.”

It looks like there are some such "sparsely populated areas" on Guam, which should meet those requirements. Staying at least 5 miles away from the airports would also be a good idea. You can see that the southern end of the island will be your best bet: 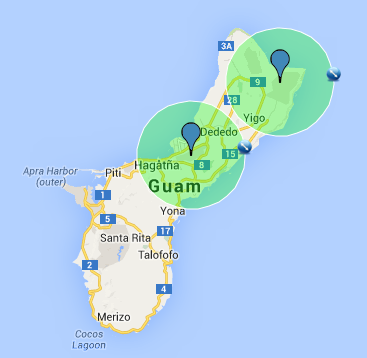 Keep in mind that there are also additional military sites there, including one in the south, that may be sensitive to such things.

Not the answer you're looking for? Browse other questions tagged faa-regulations unmanned-aerial-vehicle model-aircraft or ask your own question.

16
Where is RC aircraft flying allowed in the US?

10
Could you use radial blowers to propel a model aircraft?
1
Can I fly a quadcopter over 50m above a property I don't own according to the UK's Dronecode?
39
Why do model aircraft fly and maneuver so differently from real aircraft?
7
How high can I fly a model aircraft under 14 CFR 101 rules?
2
Can I fly part 107 in DC SFRA?
0
Is it possible to get permission to fly a quadcopter around the St. Louis Arch for non-professional means
2
Can an aircraft operator hire a Commercial Pilot to fly their aircraft under part 91?
1
Can drones/UAVs fly over international waters without being subject to the FAA's regulations?