Why does a T-tail produce a pitch-down moment in sideslip?

Here is something which I did not find in any book, but confirmed in several wind tunnel and flight tests: A T-tail causes a strong nose-down moment in sideslip. This can even be observed in a potential flow analysis, so no fancy viscous effects should be required for an explanation. But I have never understood why it happens. I would even have an explanation for a pitch-up, but the pitch-down really has me puzzled. Does someone here know more?

The image shows the situation for high angles of $\beta$:

At large angles of sideslip with swept horizontal tails, the loading will probably not be antisymmetrical mainly because of the difference in lift effectiveness of the leading and trailing portions of the horizontal tail caused by the difference in their effective sweep angles. This would result in a net lift induced on the horizontal tail which is a function of sideslip and tail height. This possible effect of tail height is illustrated in sketch 9 for large positive sideslip angles: 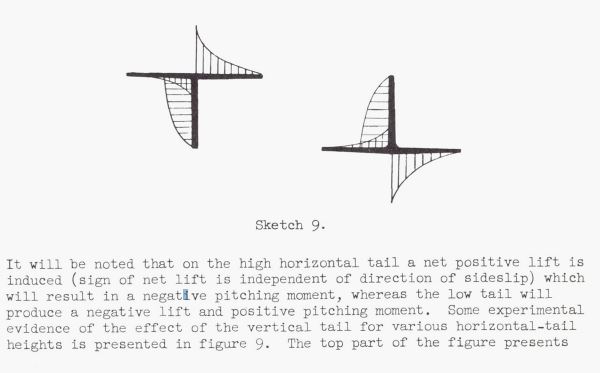 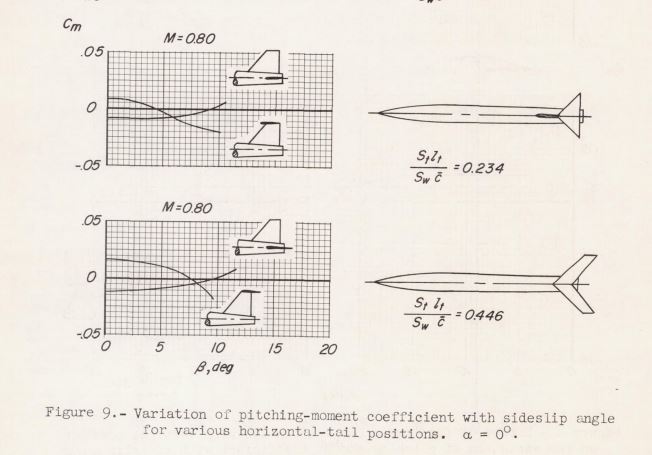 Interesting to see is that the model has no wings, so we can rule out any causes related to wings, in case people were thinking in this direction.

I putsome more thought into it, and I drew these diagrams, which helped me understand the things being said in the paper.

The blue pluses and minuses are the resulting velocities caused by the horizontal velocity as a function of the sideslip ($V_{\beta}$). The red distributions are the forces on the elevator as consequence of this $V_{\beta}$.

However, if there's sweep, the effect on the left side is less strong, whereas it is stronger on the right side (indicated by the two tails in the bottom row).

In a normal tail, the minus will act over the upper surface. It causes a deceleration of the flow over the elevator, thereby reducing the lift it generates. This causes a pitch up movement. 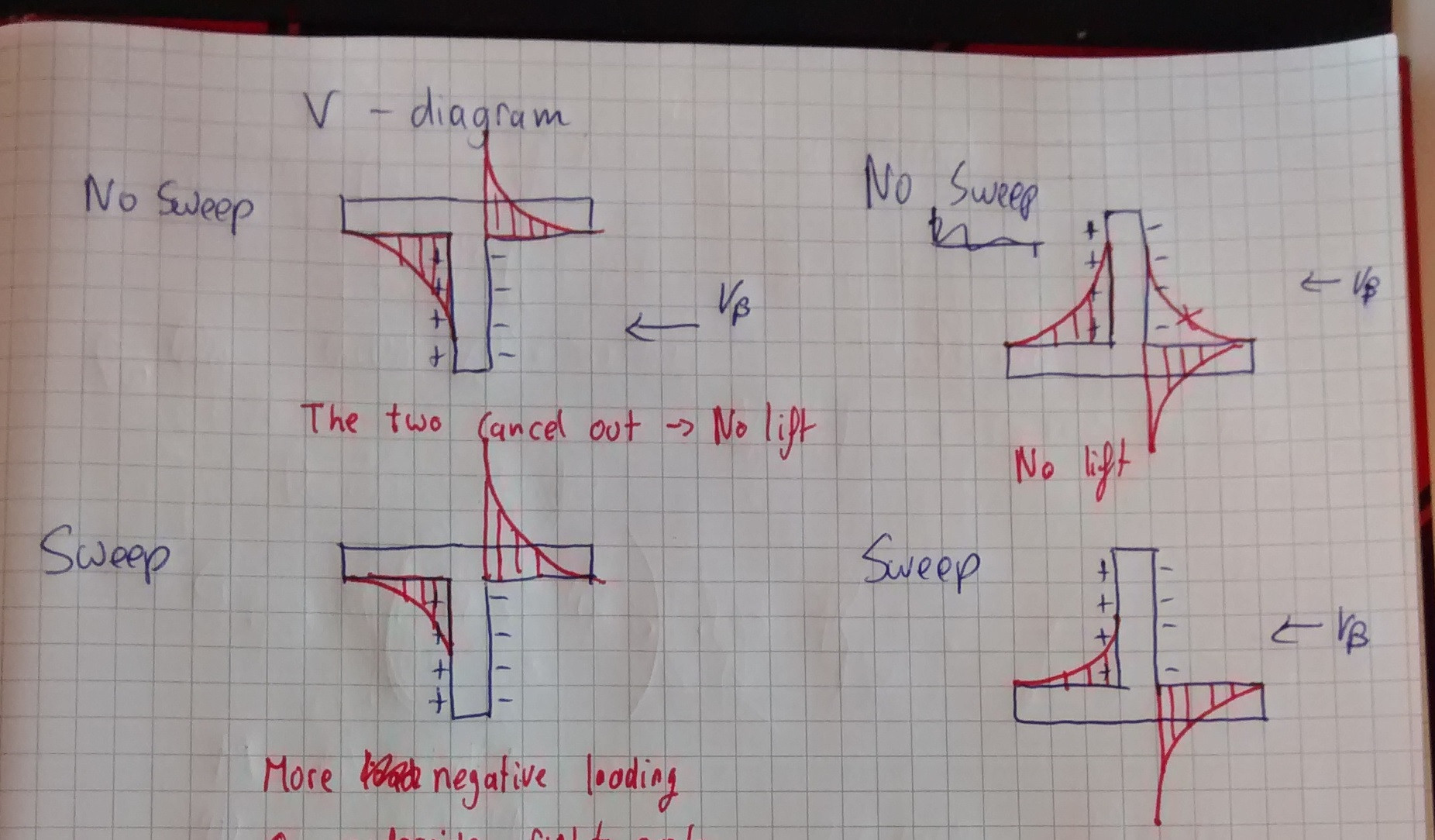 Loss of aerodynamic lift of the horizontal tailplane (downward force) causes the aircraft to pitch down.

On a conventional tail, the wind shadow of the vertical stab affects the high pressure side of the horizontal tailplane (the top surface) which is not as aerodynamically sensitive.

On a t-tail, the wind shadow of the vertical stab affects the low pressure side (lower surface) of the horizontal tailplane which is the aerodynamically sensitive side causing a greater loss of effectivity of the tailplane.

From the test pilot notes of the F-104: the centre of pressure changes with vertical position of the tail. One of the reasons for implementing the T-tail on the F-104 was to create a more desirable sideslip-roll coupling, however the upward shift in centre of pressure also creates a nose-down pitching moment with sideslip. 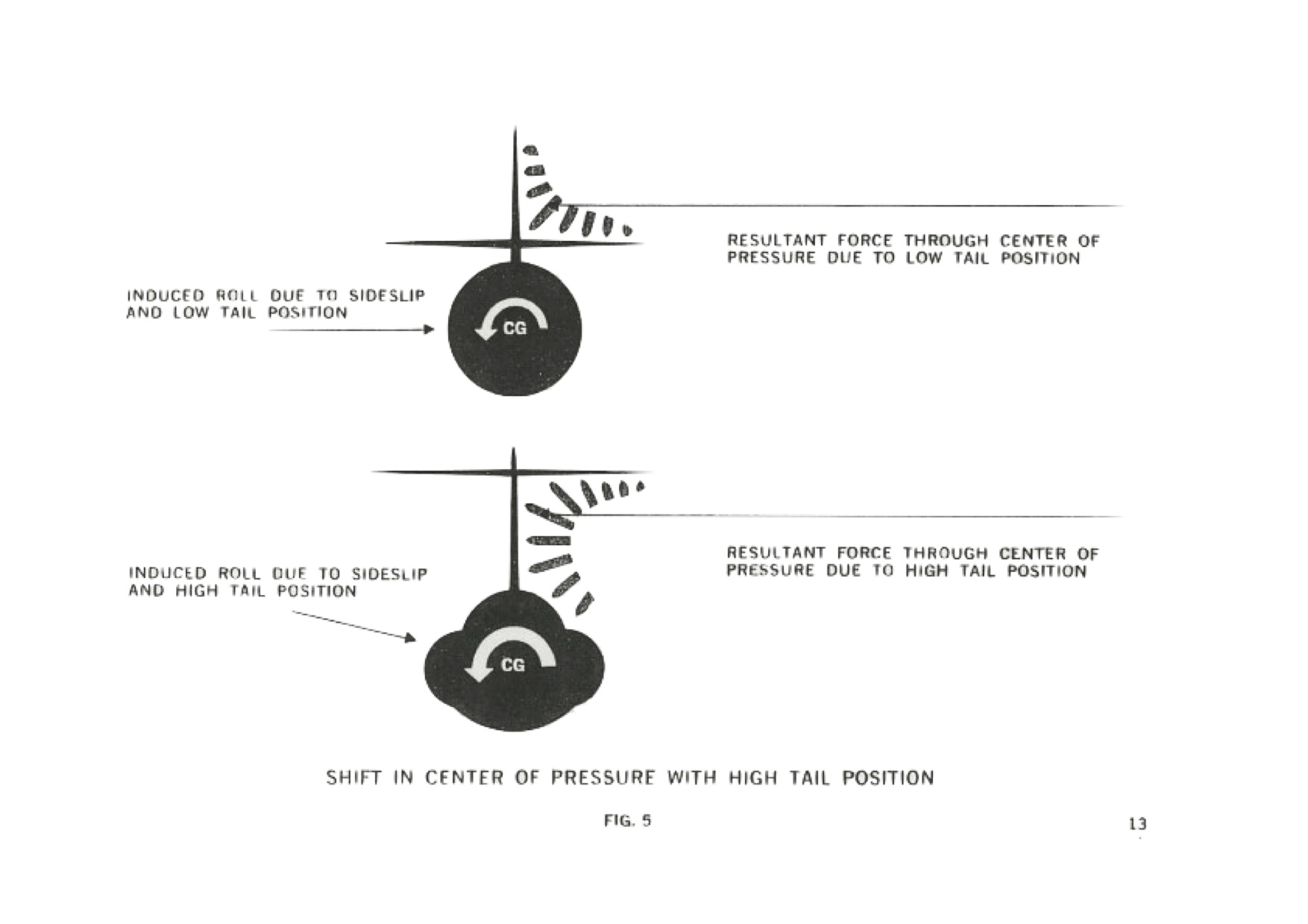 13
Why did the F-104 Starfighter have a T-tail?
2
Do aircraft pitch down even at very low angles of attack (below 0°) in a strong sideslip?

3
What causes tail-down force?
10
Why do wall-to-wall airfoils in wind tunnels produce no (or infinitesimal) downwash?
1
Why do oblique-wing aircraft suffer from significant aerodynamic cross-coupling?
6
Why does the use of reverse thrust on the DC-8 generate a pitch-up moment rather than a pitch-down moment?
1
How does sideslip indicator react during crosswind?
0
Why does spoiler extension during touchdown cause a pitch up moment?
3
Why does a banked aircraft create sideslip?
3
How does gross weight affect helicopter autorotation?
2
Do aircraft pitch down even at very low angles of attack (below 0°) in a strong sideslip?