What's the name and purpose of a barrier raised behind a carrier based jet?

I saw this picture in Wikipedia with a Su-33 jet on carrier deck with some barrier raised from the deck behind the jet tail: 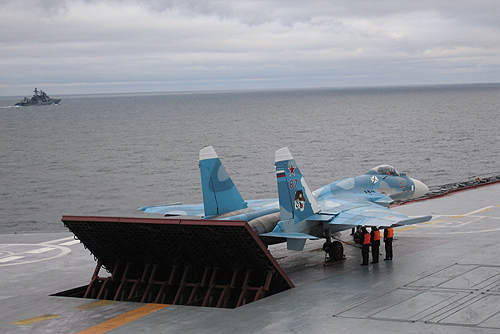 What is this barrier for and what's the official term for it?

The official name is a Jet Blast Deflector.

As the name suggests, they direct the fast-moving and hot air from the jet engines upwards. This protects the personnel and equipment behind the departing aircraft from getting blown around or damaged from the jet blast. Because of the high temperature of the jet blast, they may have active cooling systems, and must be allowed to cool sufficiently before being used as regular deck again.

To illustrate the risks, see this video, which shows a vehicle being blown away by a 747.

There was also a recent event in Pakistan where a 737 damaged the tarmac (and, as a result, itself) during an engine run-up.

The CFM56-3 (used on the 737-400) can produce exhaust gas temperature (EGT) of up to 930 C at takeoff. This will mix with the cooler bypass air (and ambient air) to reach cooler temperatures further behind the engine. Military jet engines have a smaller bypass ratio, which means there is less of the cool bypass air in the exhaust to mix with the hot core exhaust.

It's a blast fence to prevent that the groundcrew walking behind the jet get blown away by the jet blast.

It is a blast fence to protect the planes behind it from the destructive force of the jet blast of the plane in front of the fence. The plane in position for takoff will go to full power for takeoff.

Check out this video of a pickup truck being towed through the full power exhaust behind a jet. https://www.youtube.com/watch?v=DFP4xl0V0mk

Not the answer you're looking for? Browse other questions tagged jet aircraft-carrier or ask your own question.

31
What are the steep ramps often erected at large airports?
10
What is the benefit of a curved up flight deck?

8
Can carrier-based aircraft takeoff while the carrier is stationary?
3
Is it easier to land planes on an aircraft carrier with a high flight deck?
4
What modifications would be required to use a DHC-6-400 for Carrier Onboard Delivery work?
14
How are naval jets moved around below the deck of a carrier?
5
What happens during a carrier take off?
6
Aircraft Carrier Launches: ABE Checks and Signals
9
What's the story behind U-2 flying from aircraft carriers?
5
Straight vs. angled aircraft carrier decks: tradeoffs for rolling takeoff?
7
Can an F-16 land on an aircraft carrier, at all?
9
What's an "outrigger" for parking aircraft on a carrier?