What does “Ground loops are costly. Fly them until they stop” mean?

In one of the earliest scenes of William A. Wellman's 1942 film Thunder Birds, a sign can be seen in a room of a USAAF base (some relax or briefing room, apparently), which says: 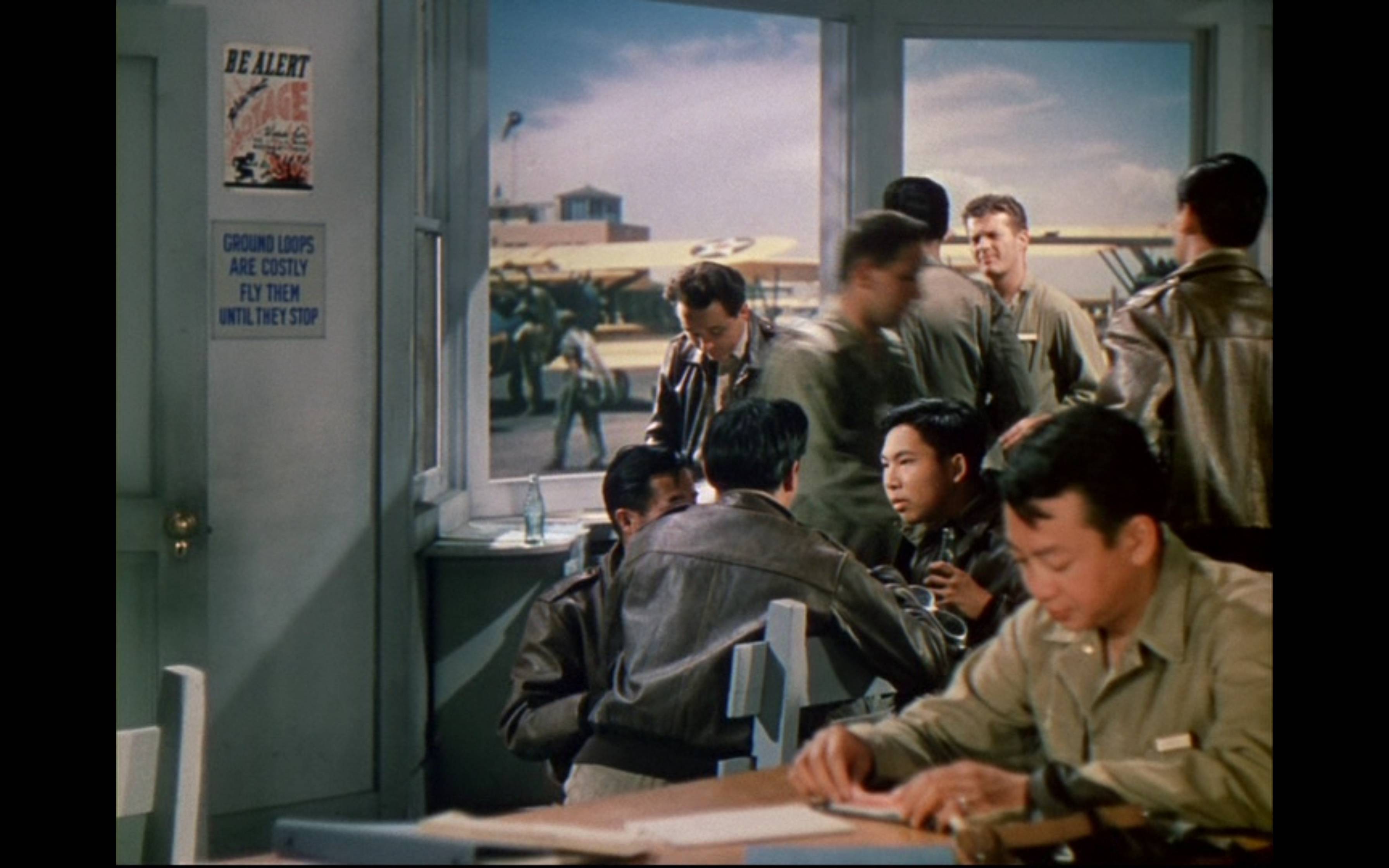 I am not entirely sure about its meaning. I know what a ground loop is, but in what sense “Fly them until they stop”? Is it an advice not to use brakes too soon after landing?

It just means "pay attention to what you are doing" until you are no longer moving. "Fly them" means "keep actively controlling the plane as if you were still in the air". Don't start daydreaming just because you're on the ground, in other words.

Especially with the taildraggers of olden times;

A lot of stuff to keep in mind. The tendency of a new pilot, when they had a successful landing, was to breath a sigh of relief and relax during the rollout when dropping below, say, 30 kt where rudder power fades away, or during taxi, forget they were in a backwards rolling shopping cart that is trying to switch ends continuously and let their mind wander, and oops.

Tricycle gear airplanes are nowhere near as physically demanding, but still you need to pay attention to what you are doing so it still applies in the end.

What this literally says:

What they meant to say:

Ground loops are costly. Fly the airplane until it stops.

Some background to why this was was important, not an answer to the question really...

From personal experience (twice) it is all to easy to relax and lose focus as soon as the airplane is rolling on the ground, the landing went quite well you think.

In a tailwheel plane you have to focus on directional control during the rollout. If there is a course deviation that is not corrected immediately it will quickly amplify out of control and develop into a ground loop. The situation is also complicated by a risk of pilot induced oscillation. If you correct a deviation to say the left and the tail is then swinging back to the right, you have to start stopping this right swing before reaching the neutral line otherwise you have a developing ground loop to the right that has to be stopped.

So, focus on the rollout, do nothing distracting like flipping switches, retracting flaps or folding maps until the aircraft has fully stopped.

The rollout is an important part of the flight.

Another saying: The flight is not over until it is over.

It means that even if you've put the wheels on the ground, you still need to "fly" the plane (meaning using control surfaces such as rudder/aileron/elevator) to maintain directional control until you've stopped.

It is amazing to realize how much aircraft changed from 1920 to 1940, and how difficult it was to properly train people to operate the new ones (all the way to stop).

A "ground loop" means exactly what it says, a very sharp turn from your intended path. Your mechanic would not be happy when the cost of damage to struts, wheel bearings, tires, and other items (should a wing drag) is assessed.

The ground stability issues of these new planes came from 4 sources, greatly increased engine power, greatly increased weight, and, especially for this discussion, weight behind the brakes of the main wheels, and the natural "weather vaning" tendency of a directionally stable airplane.

The fourth is an issue of decreasing rudder authority in a crosswind rollout that has never changed. What did change was putting a wheel on the back instead of a skid, and the relatively larger vertical stabilizer on the newer low wing monoplanes as compared with biplanes. Having a narrow track on the front, such as the Me-109, made the differential braking required to control this more difficult. Wider track mains helped.

Greatly increased power lead to much greater turning tendencies as throttle was applied, and the greater weight per area meant inertial "overshoot" with inadequate aerodynamic control became more of an issue (should be ringing bells for you "Dutch Rollers").

But the fundamental problem is brakes in front of weight. Tractor-trailers are famous for "jack knifing" for the very same reason. A fully loaded tractor trailer has 60% of its braking in front and 75% of its weight in back. This is why it wants to "swap ends" when brakes are applied. Very similar concept to drag and weight in the air (the parachute). Drag wants to be in back, weight in front for a decelerating object on the ground.

This conflicts with the need to have the mains "raked forward" to keep the plane from flipping forwards when landing! Which brings us to the old term "tail dragger". When older lighter planes landed, the skid in back would more stably drag it to a stop (from maybe 35 mph). Newer planes, landing at 100 mph, with brakes on the mains, were a different story.

The tricycle gear greatly helps this issue because the mains are set behind the CG.

The "tail dragger" concept was successfully applied to the X-15, which followed the bi-plane tradition with 2 skids in the back and a wheel in the front. The Space Shuttle was a trike.

In aviation, a ground loop is a rapid rotation of a fixed-wing aircraft in the horizontal plane (yawing) while on the ground. Aerodynamic forces may cause the advancing wing to rise, which may then cause the other wingtip to touch the ground. In severe cases (particularly if the ground surface is soft), the inside wing can dig in, causing the aircraft to swing violently or even cartwheel.

From an "aviation culture" perspective, "fly it until it stops" is still a phrase taught to student pilots to this day. It means "don't let go of the controls no matter what, act like you are in command of the aircraft until there is no more motion.". In modern times, this is taught in the context of landing in general, especially in emergency landing training (ground loops aren't a big concern with modern tricycle gear trainers). Even when things are slightly out of control, even if the airplane is running in to things, a pilot can reduce damages and injuries by applying counteractions. Just like in a car, if you skid, you don't let go of the wheel, you steer against the skid.

With this context in mind, "Ground loops are costly. Fly them until they stop." means "ground loops damage the aircraft, if you find yourself in one, don't give up! Keep trying to regain control, until there is no more motion of the aircraft."

GROUND LOOPS ARE EXPENSIVE ie if it gets away from you and enters a ground loop so severe that the aircraft flips and/or strikes a wing into the ground the damage both to the aircraft - and to you - will be very costly.

FLY THEM UNTIL THEY STOP - maintain positive control of the aircraft throughout all ground and flight operations. This is particularly true of landing in crosswind conditions where the tendency is to release control pressures immediately after touchdown. This quickly results in the airplane weathervaning in the wind and veering off centerline. This is easily correctable on a tricycle gear aircraft with proper control inputs but with the inherently unstable nature of a conventional gear airplane can quickly get out of hand with overcorrections using differential braking and rudder, which may cause the airplane to enter an unrecoverable ground loop. The remedy for this is to maintain the proper crosswind control inputs even after touchdown and fly the airplane until it is slowed to taxi speeds and ready to exit the runway.

You should maintain positive control of any aircraft with the correct flight control inputs during all phases of flight operations, but this becomes especially true in taildraggers due to their inherently unstable nature during ground operations. Tailwheel airplanes will quickly show you how bad your landing skills are and some like the Pitts S-2B will punish you for it!

Not the answer you're looking for? Browse other questions tagged landing terminology aviation-culture or ask your own question.