Do horizontal stabilizers on airliners have varying angle of incidence in the span-wise direction (washout or negative twist)?

Reading this question and answers, I was wondering if modern airliners with cruciform tail have some noticalbe washout or negative twist along the horizontal stabilizer's span.

During cruise, if wing's downwash angle is larger near the center of the aircraft, shouldn't horizontal stabiliser be slightly twisted according to this particular value, in order to reduce induced drag?

There is little to be gained by twisting the horizontal stabilizer in terms of efficiency.

First, the span of a typical horizontal tail is much smaller than the wing (see A320 illustration below for example). Apart from the small outboard portions, the downwash behind most of the wing is fairly constant. This makes the simplification of a uniform downwash on horizontal tail valid. 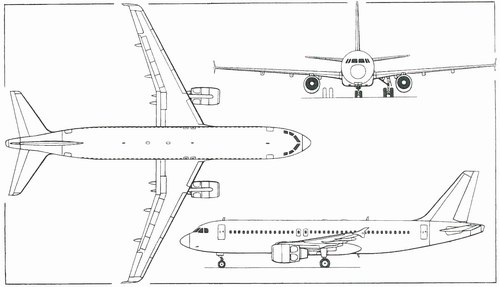 Second, the lift and drag contribution of the horizontal tail on the overall aircraft at cruise, during which aerodynamic efficiency is paramount, is fairly small. Even assuming a large static margin of 30% (smaller static margin equates to smaller tail contribution), improving the tail span efficiency from 0.8 (typical) to 1 (elliptical) only reduced the total induced drag by half a drag count using some typical aircraft parameters.

These are the parameters I used if you want to verify yourself:

2
Why is a rectangular wing planform less efficient than others?
6
What is the angle of attack of horizontal stabilizer?
2
Why does instability in pitch lower trim drag for an aircraft with a tail?

1
What is the sweep angle of the Boeing 787's horizontal stabilizers?
1
Is there a way to calculate the perfect angle of incidence of a horizontal stab for a given airspeed?