How do single engine airplanes handle changes in torque?

In multirotors, there is a regulation of torque from the rotors which keeps it stable. However, in single engine airplanes, there is only one engine with one propeller.

How is the aircraft able to stabilize itself in such a case?

Single engine airplanes experience torque proportional to the amount of engine power used. Pilots mitigate this torque by applying engine power smoothly and gradually. Since the torque on most planes will be applied to the airframe in the counter-clockwise direction from the point of view of the pilot, the pilot further mitigates this torque by applying Some right rudder when applying engine power. Aircraft manufacturers mitigate torque by offsetting engine placement and control surface neutral positions slightly. Quick applications or reductions in engine power will still cause the torque to be noticeable enough to create a left turning tendency.

Most single-engine types are stable and low-powered enough that torque is not a problem. The pilot will compensate in the usual way if one wing drops. A pilot may also trim the ailerons to counteract it during cruise, so that the plane flies level without any extra control input.

Historically, it was manageable enough on the early pioneer aircraft until the Gnome rotary came along in 1909. This engine not only had much greater power than anything else its size had had previously, but the whole engine spun round adding gyroscopic effects on top. Unstable planes with bad habits were the norm in those days, but still had to learn to be extra careful.

When J. W. Dunne fitted a second-generation 70 hp Gnome to his stable D.7 tailless swept monoplane in 1911, the torque was enough to destabilise it. He fitted a "torque flap" to the wing on one side and would raise it during landings, which had to be "dead stick" with the engine off because it had no throttle control. His larger D.8 biplane was stable enough to accommodate the Gnome quite happily.

During WWI the Sopwith Camel scout fighter had an even more powerful rotary engine, and became famous for its ability to turn like lighting in the one direction but only sluggishly in the other. The problem became insignificant when the rotary engine was abandoned.

With the advent of ever-higher engine powers in WWII the problem came back. Some designers added bigger tails and/or aileron trim tabs, a few made one wing longer than the other, pilots grew cautious of over-revving the engine on the ground.

Perhaps the ultimate solution, which saw some use well into the postwar era, and on turboprops as well as piston engines, was the contra-rotating propeller. Typically a three-bladed prop spun in one direction and another, immediately behind it and on a concentric shaft, spun the opposite way. Thus torque was greatly reduced. Both were geared from the same engine, with one exception: the Fairey P.24 comprised two 12-cylinder engines sharing a common crank case and each driving one of the two props, an arrangement in which half the engine could be shut down in flight to greatly improve endurance. However the P.24 was dropped in favour of the less-powerful Rolls-Royce Merlin and the Naval plane it was meant for, the Fairey Battle, never lived up to its potential.

The overturning torque or engine torque is an application of the principle of Newton's third law "action / reaction". Any action produces an equal reaction and of opposite direction ". By reaction to the movement of rotation of the propeller (action), an antagonistic couple tends to cause a rotation of the whole of the plane in opposite direction (reaction). overturning moment is more important phases of flight when the engine is operated at full capacity, particularly during takeoff or overshoot phase. If this couple is very important on single-engine airplanes with high motor power (Siptfire, Messerschmitt Bf 109 etc.), it is not very sensitive on modern weakly powered aircraft. 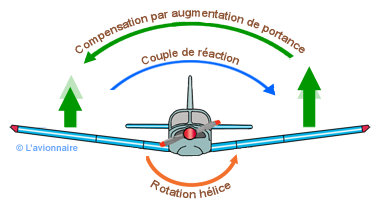 This overturning torque is generally compensated during the design of the device for a given engine speed and a given speed (speed and cruising speed in general): - either by increasing the pitch angle (incidence) d 'half a wing, - or by increasing the surface area of ​​a half wing. That is to say by increasing the lift on a half-wing. For the other flight phases a fin compensator (tab) or the stick will be used. any increase in lift leads to an increase in drag. So the left wing will have a greater drag than the right wing (right-hand propeller). This difference in drag will generate a yaw moment on the left. This yaw moment can be corrected by: - a slight timing to the left of the vertical fixed plane.(or compensator) 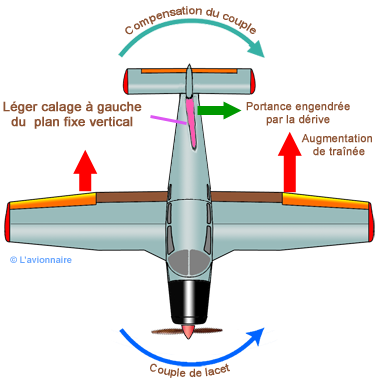 Edit:there is other torque like the roll moment,the yaw moment....

As far as i know, the plane is not stabled, pilots always have to stablilize the plane by themselves when they push the throttle up.

In fact the effect of the torque of the engine is not big enough to significantly effect the plane's flight, although it is noticeable on some planes.

Not the answer you're looking for? Browse other questions tagged aircraft-physics single-engine or ask your own question.

36
Is it even remotely feasible to turnback a single engine aircraft with an engine failure?
5
How does the safety record of the twin piston Diamond DA-42 compare to the single piston DA-40?
4
Is this the first single-engine helicopter clean-sheet design since 1976?
1
Is there a difference in aerodynamic efficiency between single engine and twin engine airplanes?
2
Is any convention to tell the propeller rotation direction of an airplane?
6
Does a left spin differ from a right spin for a single-engine propeller aircraft, in terms of spin characteristics & ease of recovery?
5
How changes in Air masses, Air flow direction and intensity affect lift?
2
How much torque can a Boeing 747 apply when pitching?