What is the role of a bound vortex?

From what I know the term bound vortex comes from potential flow theory and is a part of circulation around a wing.

I'll use the following diagram for illustration: 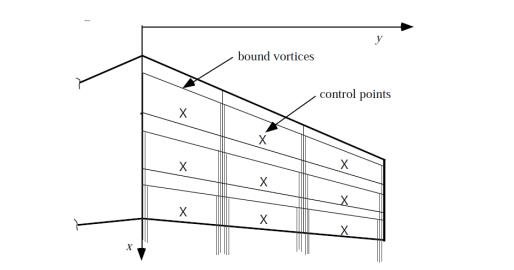 In actual fact, only the boundary layer contains vorticity, and there is usually no fluid element rotation outside of it. Since the boundary layer does not affect lift [much] in attached flows at high Reynolds number, we can ignore it and call the entire flow irrotational. This leads to the concept of potential flow. Furthermore, we can model the hard surface as a vortex sheet. The vortex sheet is called singularities and does not affect the irrotational assumption because it is a boundary and not part of the flow itself.

We can simplify the picture further. If the body is thin (like a wing), we can model the entire wing as a single vortex sheet (collapsing both upper and bottom surfaces into one). To simplify further, we can break the vortex sheet into individual vortex filaments running parallel to the wing (in the y-direction in the picture). These vortex filaments are called bound vortices. For high aspect ratio wings, we can simplify even further by considering the entire wing as a single filament, which leads to the Lifting Line Theory.

Since a vortex filament cannot end in a fluid, it must shed and end in the far field at infinity. This is a horseshoe vortex; the shed vortex filaments are called trailing vortices. A filament does not only shed at wingtips; in fact, it's shed everywhere along its length. 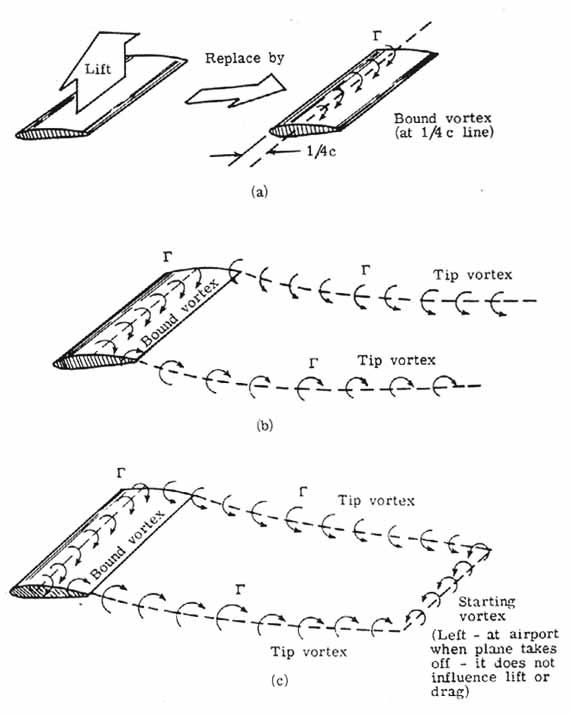 Lastly to complete the picture, acccording to Kutta-Joukowski Theorem, lift at unit span ($L'$) is directly proportional to the circulation ($\Gamma$) at the location:

Not the answer you're looking for? Browse other questions tagged aerodynamics vortex or ask your own question.

5
Is alpha induced angle real on 3D wing or just math concept?
2
What are differences between vortex, swirl, eddies and wake?
1
How do wing tip vortices that interact with the wing surface affect drag?

24
Why is the wrong explanation of “air travels a longer distance and creates a lift” so popular?
24
How do modern helicopters tackle Vortex Ring State?
7
Why does the vortex created by wing affects its own angle of attack?
3
What is the constant in this formula for additional lift?
9
Is there a physical argument for the Kutta-Joukowski theorem?
10
What is the physical meaning of circulation found in Kutta condition?
3
Why is an elliptical wing planform so aerodynamically efficient in layman's terms?
1
Why is the stagnation point on the upper surface before the start of circulation?
0
Why is the circulation around a centrifugal impeller blade tip the opposite to a wing tip?