What's the wisdom of attaching an aircraft lift strut to a wing spar utilizing a single eye bolt vs the common two plate or strap method?

in the enclosed picture are three examples of types I'm speaking of. In the top picture, the lift struts are attached via a single eye bolt. The eye bolt is obviously vertical through the wingspar

I looked at the rudimentary engineering drawing elsewhere on this site showing the forces acting on the wing spar, and get that the wingspar is tending to make an S curve. Let's assume that the wing spar in question has an internal sleeve doubler to effectively increase wall thickness to resist compression and prevent the collapse of the tube.

In the middle drawing, the most common method method. Two straps fore and aft, attached via a bolt horizontally though the spar. I have an elementary understanding that this second, commonplace method puts drilled holes through what I believe is the "neutral axis" of the spar.

finally, the bottom illustration of the "texas parasol" type of fitting. It shares a commonality with the eye bolt in that there are holes drilled through the compression and tension axis vertically through the spar and attaching a u shaped bracket to the bottom of the spar into which the lift strut is through bolted. Two holes, albeit smaller in diameter than the single but larger hole of the eye bolt. 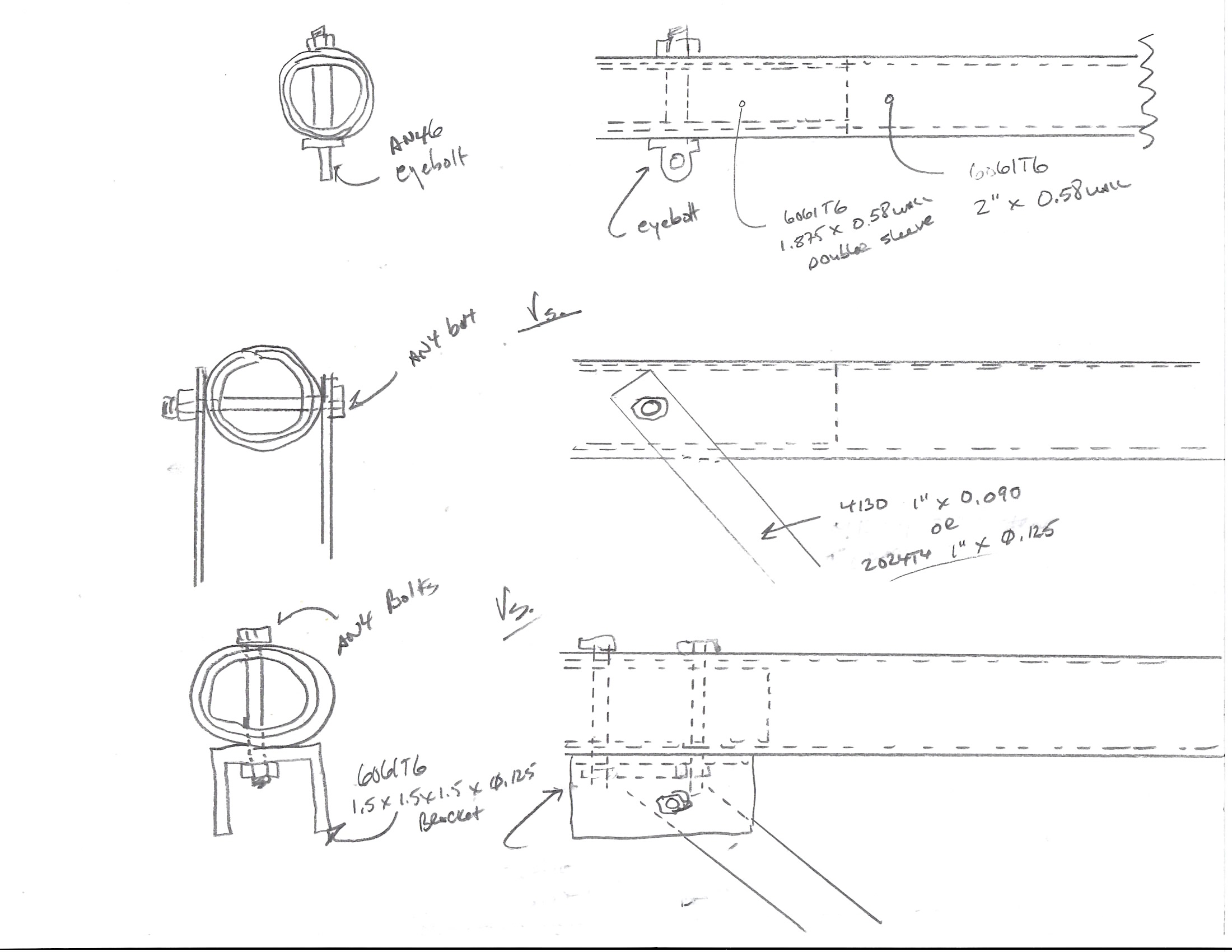 Vertical bolt = less optimal. The reason is the tube walls in the 12:00 and 6:00 locations (top and bottom areas) are effectively the primary tension and compression members of the tube, and the 9 - 3:00 areas are the shear zones.

In other words, if the tube was an I beam, you'd be putting holes right in the cap strip flange of the I beam where the tension and compression loads are highest. You're like the plumber who drills holes in floor joists too close to the edge and severely weakens the joists.

The horizontal bolt is much better because the holes are in the neutral axis of the tube, the middle of the shear zone, and the bolt/nut serve to prevent the tube from ovalizing (squashing flat) under bending load. So the horizontal bolt actually strengthens the tube overall, because the hole has little effect on the upper surface's compression strength and the lower surface's tensile strength, and the bolt and nut support braces the tube against flattening (by preventing the sides from spreading), so the upper and lower surfaces can get closer to their actual stress limit potential.

So the middle picture, pound for pound structure wise, is the best method. However you can do it the other way if you size the material to compensate for the strength lost to the holes at the top and bottom, so either way will work.

And in fact, on something like an ultralight with wire braced wings and a spar supported at multiple points along the span, a designer may find a vertical eye bolt like the top sketch to be the most elegant solution in the greater scheme of things, and it's worth while to do it that way and compensate as required with heavier meat adjacent to the holes than would be needed with a horizontal hole. 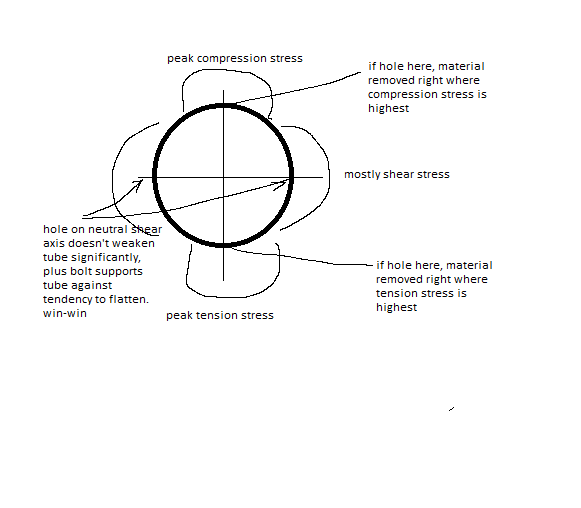 Not the answer you're looking for? Browse other questions tagged wing aircraft-structures or ask your own question.