Does joystick position control bank angle in some Airbus aircraft? And what happens when the pilot deflects the joystick when wheels are on ground?

Does joystick position control bank angle rather than directly controlling aileron/spoileron deflection in some Airbus aircraft?

Also, what happens when the pilot deflects the joystick when the all wheels are on the ground and the bank angle (or roll rate) cannot change substantially?

Does joystick position control bank angle rather than directly controlling aileron/spoileron deflection in some Airbus aircraft?

Also, what happens when the pilot deflects the joystick when the all wheels are on the ground and the bank angle (or roll rate) cannot change substantially?

Upon landing, the Normal Law transitions to Ground Mode, whereby the stick inputs command direct control surface movements. For A320, the lateral control transitions from Flight Mode to Ground Mode in 0.5 sec on ground detection is met, as shown below: 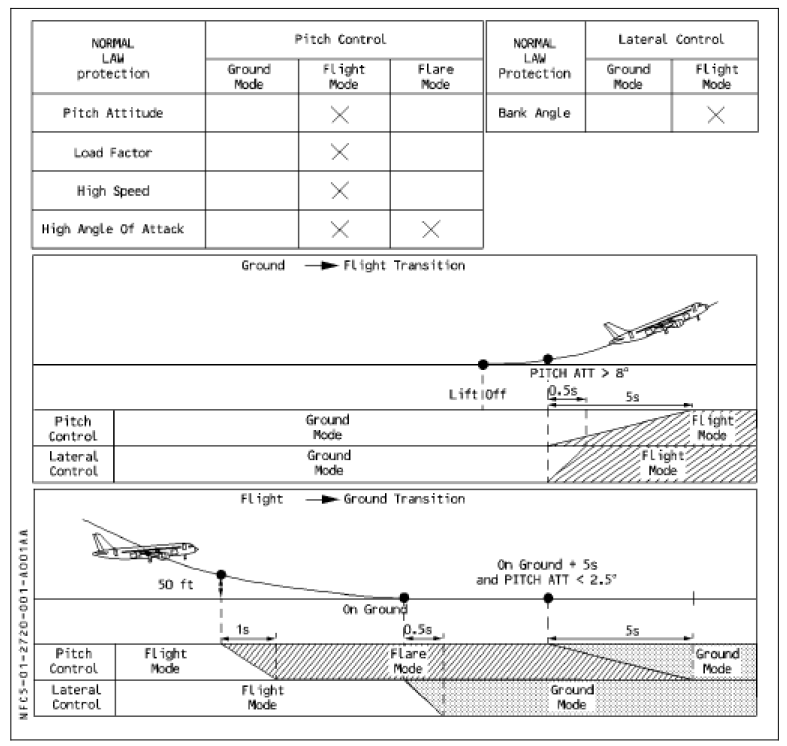 From this German accident report, in the case of an asymmetric gear deployment, ground signal is generated if "both LGCIUs (Landing Gear Control Interface Unit) detect that one landing gear has been lowered and is under load, and the radio altimeter measures the height above ground as less than 50 ft".

Therefore, immediately upon touchdown, you can expect the FBW to partially resist roll motion; but after 0.5 sec, you will have to use lateral stick to hold the aircraft level until the airspeed is too low to do so.

The sidestick (they don't like it when you call it joystick) is not controlling bank angle, but roll rate in flight. On the ground, the control surfaces are deflected proportionally to sidestick movement in order to perform a check of all surfaces before takeoff.

The details may vary, but this is generally true for all full fly-by-wire Airbuses. From the Airbus A320 FCOM:

When the aircraft is in the "in flight" mode, normal law combines control of the ailerons, spoilers (except N° 1 spoilers), and rudder (for turn coordination) in the sidestick. While the system thereby gives the pilot control of the roll and heading, it also limits the roll rate and bank angle, coordinates the turns, and damps the dutch roll.

The roll rate requested by the pilot during flight is proportional to the sidestick deflection, with a maximum rate of 15° per second when the sidestick is at the stop.

When the aircraft is in "flare" mode, the lateral control is the same as in "in flight" mode.

The objective of the lateral ground law is to facilitate aircraft handling on ground.

The lateral ground law is a full authority control law in roll and yaw, with some yaw damping.

However, for small sidestick deflections, the lateral ground law helps the pilot to keep a small bank angle (less than 2 °), using only the ailerons. In particular, when the sidestick is at neutral, the law will aim to keep the wings level.

When rudder pedal deflection is close to maximum, yaw damping is removed.

The ground law is gradually phased in during 5 s after touchdown.

In manual flight, the normal law provides aileron and spoiler control from the sidesticks, to achieve a roll rate which is proportional to the sidestick deflection, independent of the aircraft speed.

With a full sidestick deflection, the maximum achievable roll rate is 15 °/s.

Regarding your second question:
Regardless of the exact mode you are in during landing (first "in flight", then "flare" then "on ground"), the pilots always have roll control available which will help keeping the aircraft level without the left gear until the speed is too low to do so.

Not the answer you're looking for? Browse other questions tagged aircraft-design airliner flight-controls airbus fly-by-wire or ask your own question.

23
What happens when two different control inputs are commanded in an aircraft with two control columns?
15
Is it safe to fly a glider when I can't move the stick fully left and right?
6
Why is the 737’s aileron/spoiler authority reduced at low flap settings?
6
Are there left seat qualifications specific to actual handling of the aircraft?
6
Why does the A320’s maximum allowable aileron deflection decrease, rather than increase, when the flaps are extended?
16
Why not use the yoke to control yaw, as well as pitch and roll?
1
On Airbus aircraft, can the pilot control the aircraft when the autopilot is active?