According to Wikipedia, one of the factors which almost caused B-29 44-27297 (Bockscar) to run out of fuel and crash at the end of its 9 August 1945 strike mission was the selection of an excessively high en-route cruise altitude1 (my emphasis):

Bockscar took off from Tinian’s North Field at 03:49. The mission profile directed the B-29s to fly individually to the rendezvous point, changed because of bad weather from Iwo Jima to Yakushima Island, and at 17,000 feet (5,200 m) cruising altitude instead of the customary 9,000 feet (2,700 m), increasing fuel consumption.

For most aircraft (even those not designed for high-mach flight), indicated airspeed (and, thus, per-distance fuel burn) generally only starts becoming mach-limited around 25-30 kilofeet (below this, approaching the aircraft’s mach limits would require airspeeds that are, except for specialised high-speed fighter and attack aircraft, greatly in excess of VNE, and would cause the aircraft to disintegrate from uncontrolled flutter), or even higher for aircraft optimised for transonic flight,2 so an aircraft’s per-distance fuel efficiency should continue to improve until at least these altitudes, as long as the engines can still produce enough power. The B-29’s3 engine, the Wright R-3350, is a turbocharged piston engine, and, thus (as the power output of turbocharged piston engines, like that of turbine engines,4 remains fairly flat up to very high altitudes, unlike that of naturally-aspirated piston engines, which drops off very rapidly with increasing altitude, or that of mechanically-supercharged piston engines, which also drops off considerably at high altitudes, although not nearly as much as naturally-aspirated piston engines), the B-29’s indicated airspeed would not be expected to be limited by available engine power below the altitudes at which it would become mach-limited.

Why, then, was Bockscar’s fuel burn apparently higher at 17 kft than at 9 kft, rather than lower?

1: Other factors were a broken fuel pump, which rendered unuseable all the fuel in one of the aircraft’s fuel tanks; the decision to take off with said fuel tank full of useless fuel, rather than defuelling the unuseable tank first to lighten the aircraft; the pilot’s circling at the rendezvous point for three-quarters of an hour waiting for an aircraft that never arrived, when he had been specifically ordered to wait no longer than fifteen minutes; the primary target’s having been covered by smoke and cloud which would not have been there absent the half-hour delay, resulting in the aircraft having to circle over the primary target, burning fuel, for fifty minutes before diverting to the secondary target; and twenty minutes wasted circling over the emergency landing field attempting (unsuccessfully, due to a broken radio) to gain landing clearance even when said clearance was not needed due to the aircraft’s critical low-fuel emergency.

2: Such as, for instance, all modern jetliners.

3: Bockscar was a B-29-36 (“Silverplate”) aircraft, extensively modified from the stock B-29 configuration to enable it to carry nuclear weapons; however, the vast majority of these changes were internal, having no effect on the aircraft’s aerodynamics. Of the exceptions, one (the use of reversible-pitch propellers on the Silverplate aircraft) would have no effect on the aircraft’s high-altitude performance except in the case of a propeller reversing in flight (hopefully not a normal, or even a common, occurrence), a second (the removal of almost all of the gun turrets found on a stock B-29) would considerably decrease the aircraft’s drag, making fuel burn less critical in any case, and, while the weight reduction (reducing the amount of lift - and, thus, the amount of induced drag - needed to maintain level flight) and more powerful engines (tending to cause the aircraft’s IAS to become power-limited at a higher altitude) of the Silverplates would tend to shift the minimum-per-distance-fuel-burn altitude upwards compared to that of the stock B-29 configuration, even the unmodified aircraft routinely operated at very high altitudes without difficulty, indicating that excessive fuel burn at high altitudes was probably not a big issue even for non-Silverplate B-29s.

4: And for exactly the same reason - the precompression of the intake air compensates for the lower density of high-altitude air.

efficiency fuel-consumption b-29
Share
Improve this question
edited Jun 7 '21 at 12:53

The range loss at high altitudes is caused almost entirely by the rich mixtures required at high powers and the larger cowl flap openings needed to cool the engines at high altitudes. In general, there is no loss in range up to 15,000 feet and the range losses at higher altitudes occur almost entirely when flying at the highest weights. You can avoid them, to a considerable extent, by flying at low altitudes until fuel has been used and a moderate weight has been obtained and then climbing to a higher altitude. [emphasis added] 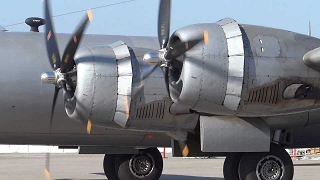 Note: The B-29's engines are air-cooled, and the higher, the thinner the air. Each engine has a two-speed engine-driven supercharger as well as two exhaust-driven turbochargers (similar setup on the B-17 can be seen here). An intercooler is used to cool the exhaust-boosted air, which will be limited in thin air as well. The cruise manifold pressure was 28" Hg, compared to 47½" Hg on takeoff.

The remark on weight is due to the limited thrust when compared to a jet-powered airplane. By using the lift equation, jetliners have the ability to fly faster (TAS), whereas a B-29 will need to alter the $C_L$ somehow (angle of attack).

$^1$: Related: How does the efficiency of a piston aircraft change with altitude?

Not the answer you're looking for? Browse other questions tagged efficiency fuel-consumption b-29 or ask your own question.

10
How does the efficiency of a piston aircraft change with altitude?
3
In high-altitude piston aircraft, what type of forced induction (boost) is used?

19
Are turboprops more efficient than piston engines (thrust per fuel consumption)?
17
Why is max endurance different for jet and props?
4
Why does the Zapata Flyboard Air UL consume so much more fuel/hr than the Mosquito Air?
6
Does one-engine cruise consume less fuel than two-engine cruise?
11
Can ekranoplans (GEV) be more efficient than traditional airliners?
0
Turboprop vs Turbofan: How to compare Specific Fuel Consumption
3
How does fuel economy quantitatively depend on altitude for a jet?
16
Can the plane Celera 500L be eight times more fuel efficient than a jet of similar size and capacity?
6
Did the jet stream really stop the B-29, or was it just bad luck?
2
Comparison: e-aircraft vs. ground EV modes (car, coach, rail)