What is the climb-out angle of a twinjet upon one engine failure scenario?

Take a typical 737-800 or A320 at MTOW how much difference in take off angle does a 1 engine out failure scenario make, compared with a normal 6-8 degree take off angle with full engines.

... The steady gradient of climb may not be less than 2.4 percent for two-engine airplanes ...

Aircraft Flight Manuals (AFMs) don't typically include the all-engines gradients of climb as noted in AC 120-91A:

... It is recognized that many AFMs generally contain only the OEI performance for loss of an engine at V$_1$ on takeoff ... [emphasis added]

The OEI (One-Engine Inoperative) scenario is what matters more for obstacle clearance.

The performance tables are typically set up for ease of use. Instead of gradients, they list the maximum weights that would guarantee the regulatory gradient for the different pressure altitudes and temperatures, which are known as climb limit weights.

Consider a 737-800 at MTOW at a hot-and-high airport, it is not given that it can attain the 2.4% with an engine out. The TOW needs to respect the climb limit. 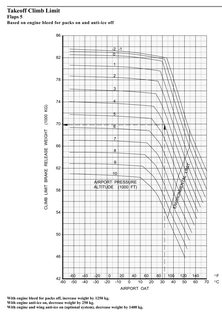 27
What is the maximum safe bank angle of a 747?
53
Can the Airbus A380 safely fly with two engines out on the same wing?
7
For light, GA aircraft, is there a "standard" turn, and what does that mean?
7
Does load factor limit actually change with aircraft weight?
3
Can airline ignore or get exception from V1 and other safety rules?
7
What performance issues/symptoms can a pilot expect while taking off above MTOW?
6
Under which conditions is full rated power instead of METO power required for takeoff (DC-3/C-47 with Pratt&Whitney 1830 twin wasp engines)?
15
What is the maximum take off climb angle of a Boeing 737 MAX?