Does anyone happen to have a reference or such that explains the naming convention used by Prof. Wortmann for his airfoils?

Usually it follows that for symmetrical ones, the first 2 digits are to indicate the planned transition location at zero alfa and the last 3 for for the thickness.

would like to double confirm this with a reference if available and also the meaning of the middle letters used in some foils.

Ex: FX76-MP-150 (MP for man-powered in this case but there are many more) 2 is known thanks to Peter Kampf. Any idea on remaining? 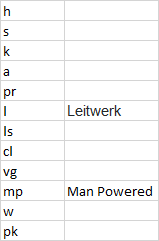 The next two digits stand for the year this airfoil has been designed. Add '19' in front and you have the full year.

Then may follow one or two optional letters which specify a dedicated use, but they can be missing for general purpose airfoils. For example, the 'L' in FX 71-L-150/30 stands for "Leitwerk" which in German is the name for the combination of the horizontal and vertical tail surfaces.

The last digits are again optional and denote the relative flap chord in cases of control surfaces, this times in percent. The FX 71-L-150/30 is optimized for a 30% chord control surface.

8
Why are the wings of some modern gliders tadpole shaped?
0
The numerical method used by F.X Wortmann for inverse design

10
Why doesn't an airfoil rotate?
2
Why is this airfoil curved upwards on the bottom part of the airfoil?
3
What is the best airfoil for Edge 540 Style Aircraft?
5
What is the name of this airfoil?
1
NACA Airfoil 0005.4
2
Shock wave on airfoil
0
Would a airfoil move backwards if you rotate it vertical
2
What are Uses of thin airfoil and thick airfoil?
2
How is rotor airfoil analysis different than fixed wing airfoil analysis?