Why is a rectangular wing planform less efficient than others?

For the same wing span, an elliptical wing planform is the most aerodynamically efficient compared to any other flat wing planform because it has the lowest induced drag. Note that we are comparing only aerodynamics here. Things get much more nuanced once you couple structural weights, stability & control for a global efficiency (also see @Peter's answer).

So restricting to aerodynamics, elliptical wing planform is the most efficient because it has the lowest induced drag. Induced drag is produced because wings have finite span, and therefore one section of the wing distorts the flow on another section, creating downwash. This downwash distorts the lift vector on each wing section, thereby converting what otherwise would be lift into drag.

The following figures show the distributions of elliptical wing, rectangular wing (taper = 1) and tapered wing (taper = 0.5), with aspect ratio 8 and all producing a total $C_L=0.4$. Here, Ref Cl is the actual lift coefficient distribution that we've talking about, but multiplied by span length; Local Cl is the lift coefficient produced at each wing section, as if it's standalone airfoil; $\alpha_i$ is the downwash distribution in deg. The data are generated from Lifting Line Theory. 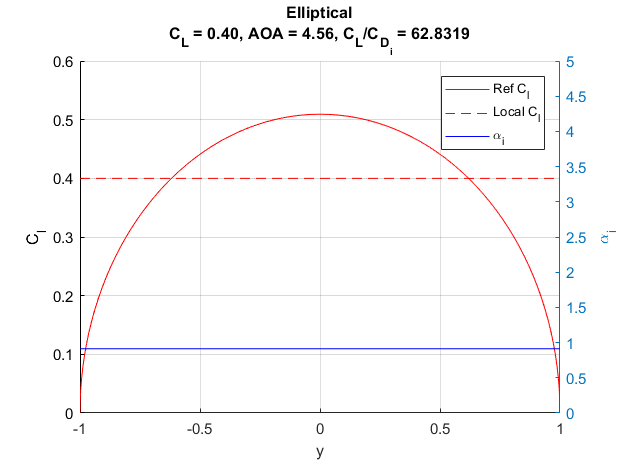 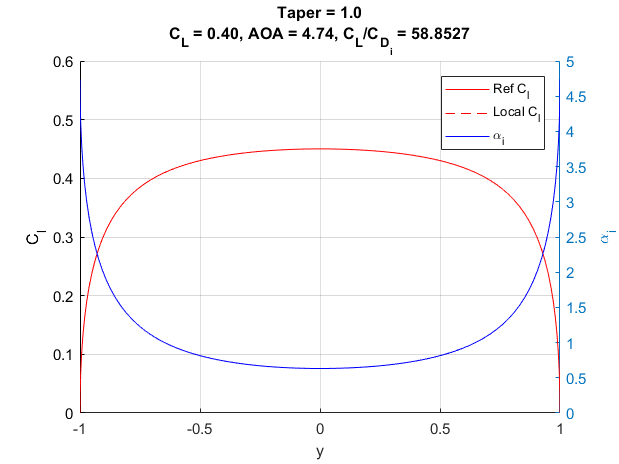 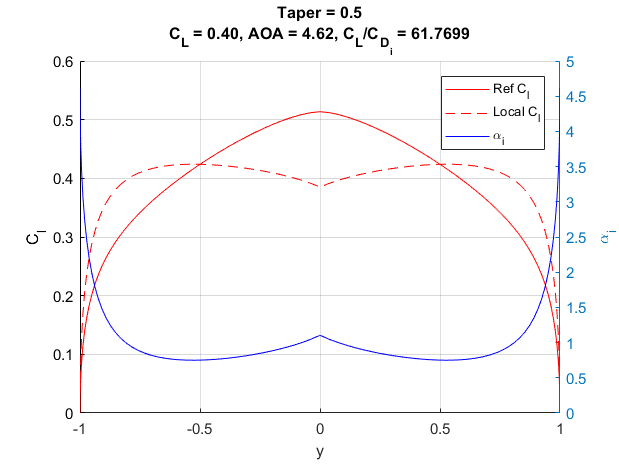 As you can see, elliptical distribution maintains a constant downwash, compare that to a wider and more varied one for a rectangular wing. Also, a taper of 0.5 gets you fairly close to the elliptical lift and downwash distributions, especially when you consider the $\frac{C_L}{C_{D_i}}$, which is 62.8 for elliptical and 61.8 for tapered.

The inefficiency is the result of a comparably high weight in relation to the possible lift. However, for small aircraft that disadvantage is not very pronounced (this is true especially for braced wings and biplanes) and is outweighed by very favorable stall characteristics. Also, a rectangular wing is very easy to build. Compare with what has been built so far - many competitive small aircraft and most biplanes use a rectangular wing. Since they often cruise at speeds much above their best range speed, induced drag optimisation is of minor importance in those designs.

A better planform has more chord at the root and less at the tip: Such a trapezoidal wing can be built lighter. If the root has more chord, the spar can be made thicker, and if the area at the tips is smaller, less bending moment is created for the same lift. Bracing takes care of the root bending moment, but in cantilevered monoplanes the rectangular wing loses most of its benefits. A taper ratio of 0.7 will still leave enough stall margin at the tips when combined with some washout.

Especially large aircraft tend to have even smaller taper ratios because they concentrate most lift near the root wich makes their wings more efficient. Even though their induced drag coefficient might be higher than that of an elliptical wing, their overall induced drag is lower because of the comparably low wing mass which lowers the overall lift requirement.

The fundamental issue is the behaviour at the wing tip.

On a rectangular wing the high pressure beneath and the low pressure above cause air to spill up round the tip and spiral backwards in a wingtip vortex. This both lowers the pressure difference, reducing lift near the tip, and loses energy to the vortex, increasing drag. Both these effects reduce overall efficiency.

If the tip is made smaller while keeping the wing span and area the same, for example by tapering the wing or making it elliptical, then the tip losses and the inefficiency are also reduced.

A more detailed explanation gets more complicated, but I am not sure you want all that.

12
How is the induced drag calculated for a wing with elliptical planform?
8
Why does the elliptical wing have the lowest drag?
7
Why are modern aircraft wings often pointed instead being more rectangular?
1
Why is a reduction in lift called 'drag'?
2
Elliptical wing planform and elliptical lift distribution
4
Why do tapered wings not stall at the root first?
3
Why do the elliptical and the rectangular wing show different aerodynamic efficiency?
2
Do horizontal stabilizers on airliners have varying angle of incidence in the span-wise direction (washout or negative twist)?
1
How to calculate the zero lift drag coefficient for a wing with data from airfoiltools.com?
1
L/D -Bell vs Eliptical spanload?
See more linked questions