Is airflow deflected inwards or outwards by wing sweep?

We are often told that wing sweep causes the airflow to be deflected outwards. I can understand this for the underside, but for the upper surface it seems inconsistent with other effects.

For example on a sharply-swept delta, sideways flow out from below, up around the leading edge and back in again over the upper surface becomes dominant. It feeds the vortices employed by Concorde to enhance lift at low speeds. The sharper the sweep, the more the air over the upper wing flows inwards. The same effect is seen in miniature with tip vortices on a straight wing. This makes sense to me because the pressure above the wing is low, so that would naturally attract air in towards that zone.

So, does sweeping a straight wing really reverse such effects, or do say wing fences on the upper surface actually stop the air flowing inwards?

As a partial answer following up on those to date, here is an image from Where is the spanwise flow? How does the span wise flow point the air towards the wingtip?, showing a snaking in-then-out flow over the wing. Note the inward flow over the leading edge and wing section, which is just the point where wing fences are located. 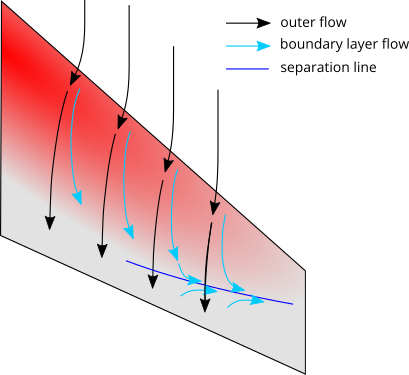 On sharply-swept deltas which sit inside the bow shock cone at supersonic speeds, 1980s studies of supercritical attached flows show the air flowing upwards round the leading edge and forming a crossflow to meet an inboard "crossflow shock". See for example W.H. Mason, “A Wing Concept for Supersonic Maneuvering,” NASA CR 3763, December 1983. But it is less clear to me whether this inbound crossflow is physical, or a theoretical notion along the wing profile which, due to the sharply tapering chord with span, physically might still flow outwards: 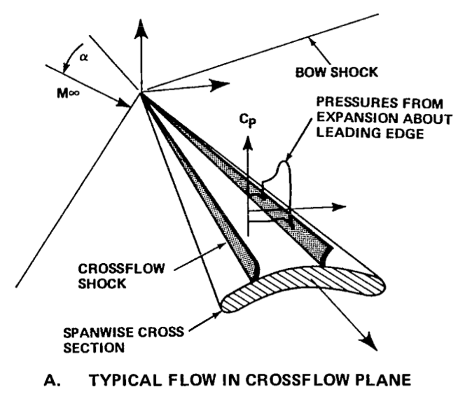 This contrasts with the low-speed vortex flow over such wings (e.g. Concorde) at high angles of attack, where the vortex inflow is detached and the boundary layer flows outwards.

So it seems the full the answer must be complicated, with the pressure distribution along the chord, and hence the in-out flow changes, depending on the angle of sweep, the speed of flight, the angle of attack and how far above the wing you are considering.

It is deflected outwards by swept back wings and inward by front sweept wings. That is the main job for wing fence (to prevent the outside flowing of the airflow). 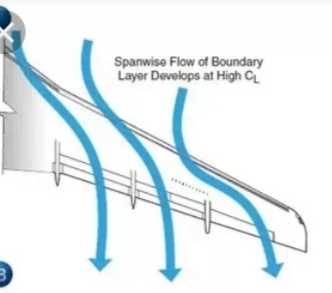 Not the answer you're looking for? Browse other questions tagged aerodynamics wing-sweep or ask your own question.

8
Where is the spanwise flow? How does the span wise flow point the air towards the wingtip?

4
How is a variable sweep wing constructed?
32
Why did the DC-3 have wing sweep?
10
Why do wall-to-wall airfoils in wind tunnels produce no (or infinitesimal) downwash?
3
Is wing sweep needed on supersonic aircraft?
1
Where is the wing sweep angle measured from?
1
Why do oblique-wing aircraft suffer from significant aerodynamic cross-coupling?
0
Can wing sweep decrease total drag force at low-subsonic speeds?
2
How does a variable-sweep-wing aircraft keep wing-mounted payloads straight?
4
How do you maximize lift while keeping span as short as possible?
2
Taper sweep angle