What is an airliner's "green dot speed", and how does it vary with weight, and why?

A related question told us, quoting from an Airbus performance manual,

Green dot speed (minimum gradient) is a function of weight.

Comments under the question stated that the "green dot speed" increased as weight increased.

So-- what is "green dot" speed? Does it reference some fixed, optimal angle-of-attack? Perhaps the one that gives the best L/D ratio (glide ratio)? If so, it would obviously increase with weight, generally being proportional to the square root of the wing loading. If this interpretation of how green dot speed varies with weight is not the correct one, then what is?

Green Dot (GD) speed is a term used by Airbus. It is named after the symbol on the speed tape. It refers to the speed that results in the best climb gradient in case of an engine failure, but it is close the speed resulting in best L/D ratio with all engines operating.

Airbus defines it as follows: 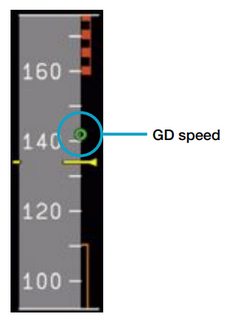 How is GD determined?

GD speed is computed by the Autoflight systems and is based on the aircraft weight. The GD formula has been set up so that the resulting airspeed provides the best lift-to-drag ratio for a given altitude, air temperature and aircraft weight, in clean configuration with one engine out. In some phases of flight, GD is computed to minimize drag and thus, the fuel consumption (for example during the HOLD phase).

The GD speed is increasing linearly with aircraft weight and slightly increases with altitude above FL200: 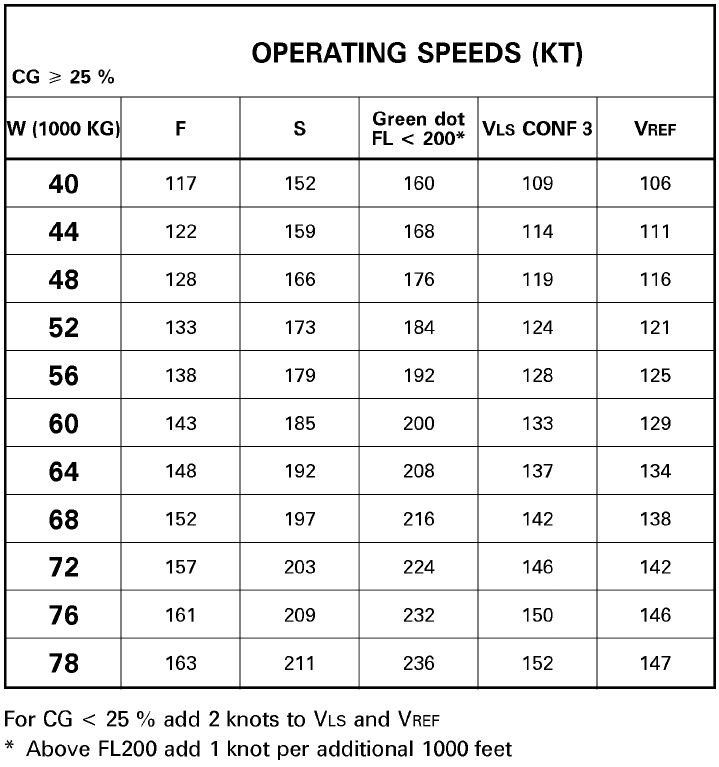 Here is a plot of the GD speed as a function of weight for different altitudes: 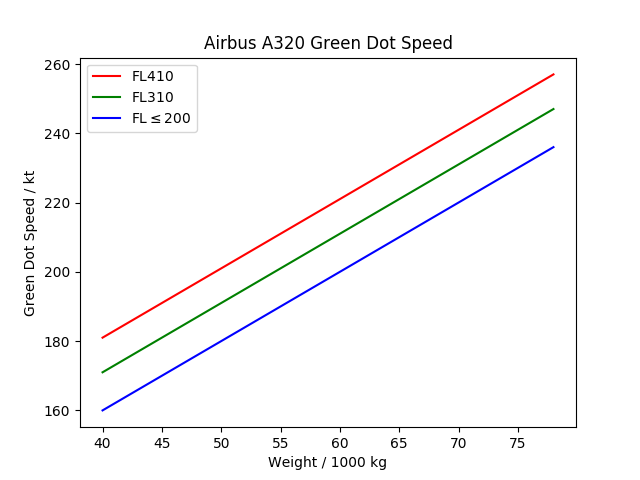 Not the answer you're looking for? Browse other questions tagged aircraft-performance airliner airline-operations terminology airbus or ask your own question.

18
Why does an airliner have a shallow descent when heavier, opposite to gliders with ballast?
2
Does Green Dot Speed Calculation include banking Angle?

8
What is weight-climb speed?
11
About climb: If we use T/W as input, the second grade equation yields two solutions for W/S. Are both solutions realistic?
6
Does a high "wing loading" require a high approach speed or does it cause a high approach speed?
4
How much does weight really affect the operation cost?
3
How does maximum speed vary with altitude?
18
Why does an airliner have a shallow descent when heavier, opposite to gliders with ballast?
1
Why isn't Vy lower than the speeds for best L/D ratio and best glide ratio in an airplane with a piston engine and a variable-speed prop?
2
Does Green Dot Speed Calculation include banking Angle?