Would a airfoil move backwards if you rotate it vertical

Lets say i have a wing with an engine attached to it like a propellor. And now i point the nose of my airplane up untill it is vertical.

Would the wing still generate lift because of the air flowing past it. Resulting in a backwards movement of the entire airplane?

EDIT I am suggesting that the plane is hovering vertical not gaining or losing any altitude.

This may sound very vague, so here an image hopefully to make it clearer: 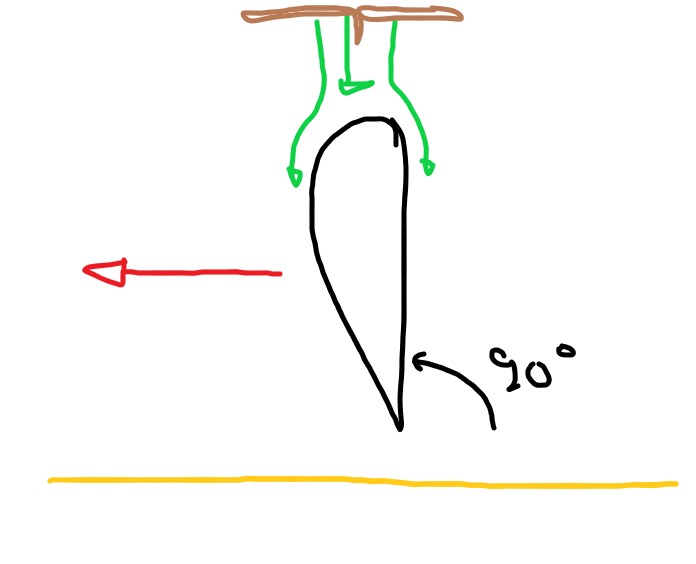 So just to clarify, the brown thing should resemble a propellor.
the yellow line the horizontal normal orientation of a wing.
and the red arrow the resulted direction of the airfoil.
and the green lines the airflow.

As you may have guessed i am not an expert when it comes to planes and the physics behind it all. So pls let me know if more information or clarification is needed.

A practical example of your question is when a model aerobatic aircraft with a conventional aerofoil profile (ie, not symmetrical) is fitted with a sufficiently powerful motor that it can be made to hover in the vertical position. This is quite a common trick.

The answer is yes, there is a force in the direction of the red arrow.

The model might drift in that direction, although there are other aerodynamic forces, torque, centre of gravity & thrust vector issues that will affect the balance, and these will change as power is increased and the model goes from hover mode to vertical flight mode.

It would depend on the Angle Of Attack of the area of the wing in the propeller slipstream. If the flow was at the wing's zero-lift AOA, there would be no lateral force. Aerobatic aircraft with symmetrical airfoils that are at zero incidence in the propeller slipstream would be that case. Wayne Handley's Turbo Raven hovering act back in the 90s, where he would hover in front of the crowd for extended periods, would be like this (saw it a couple of times; my favourite airshow act of all time).

An airplane with a cambered airfoil, where the zero lift AOA was at a slight positive or negative angle to the stream would see a lateral component. The pilot holding a hover like that would simply cancel that out instinctively with an small elevator input that slightly tilts the thrust vector to compensate.

This can be complicated by the need to use aileron as an anti-torque control during something like this (you need ailerons that are large and go right to the wing root so they are in the prop stream), which may modify the overall lateral lift effect.

Yes, that wing would create some sideways lift. Whether it would actually move depends on how you are holding your aeroplane vertical. Obviously it's not going to move if you've bolted it to a big, heavy, test stand. For an aerobatic plane prop-hanging, it would depend whether the aerofoil is symmetrical, and the angle at which it is fixed to the plane. The effect would be easy to counter by hovering not-quite vertically.

If you think about it, a propeller is just a vertical aerofoil that generates forward 'lift' when it's travelling up (and sideways and down).

17
Why do planes not fly “backwards” (up from the planes POV) when in a vertical climb?

10
Why doesn't an airfoil rotate?
6
How would an airfoil react if it was flown backwards?
2
Why does the stagnation point on airfoil move with the angle of attack?
1
Which airfoil would be optimum for a glider?
1
As you make a symmetrical airfoil thicker, in which direction does the lift force increase?
2
Would adding a slat and a slotted flap increase the max CL of a multi element airfoil to 6.5?
2
How do I choose the vertical tail's airfoil?
1
How do you calculate the optimal cruising speed of an airfoil?