Do airliner cabin filters trap viruses or other pathogens?

I understand that half the air in an airliner is re-circulated (per How much air is recirculated (vs. bleed air injected) in modern airliners cabin?). Of this 50% re-circulated air, what it's the chance that viruses pass through its filters?

Disregarding possible recent developments due to the COVID-19 outbreak, were filters normally designed to remove viruses or sterilize the air somehow?

airliner cabin-design cabin
Share
Improve this question
edited May 14 '20 at 19:22

Modern airliners use HEPA filters to filter the air before re-circulation. This will remove almost all airborne pathogens like viruses:

The overall risk of contracting a disease from an ill person onboard an airplane is similar to that in other confined areas with high occupant density, such as a bus, a subway, or movie theatre for a similar time of exposure. anywhere where a person is in close contact with others.

That said, the risk on airplanes is probably lower than in many confined spaces because modern airplanes have cabin air filtration systems equipped with HEPA filters.

HEPA or high efficiency particulate air filters have similar performance to those used to keep the air clean in hospital operating rooms and industrial clean rooms. These filters are very effective at trapping microscopic particles as small as bacteria and viruses.

The following image shows the location of this filter in front of the re-circulation fan for a Boeing 737: 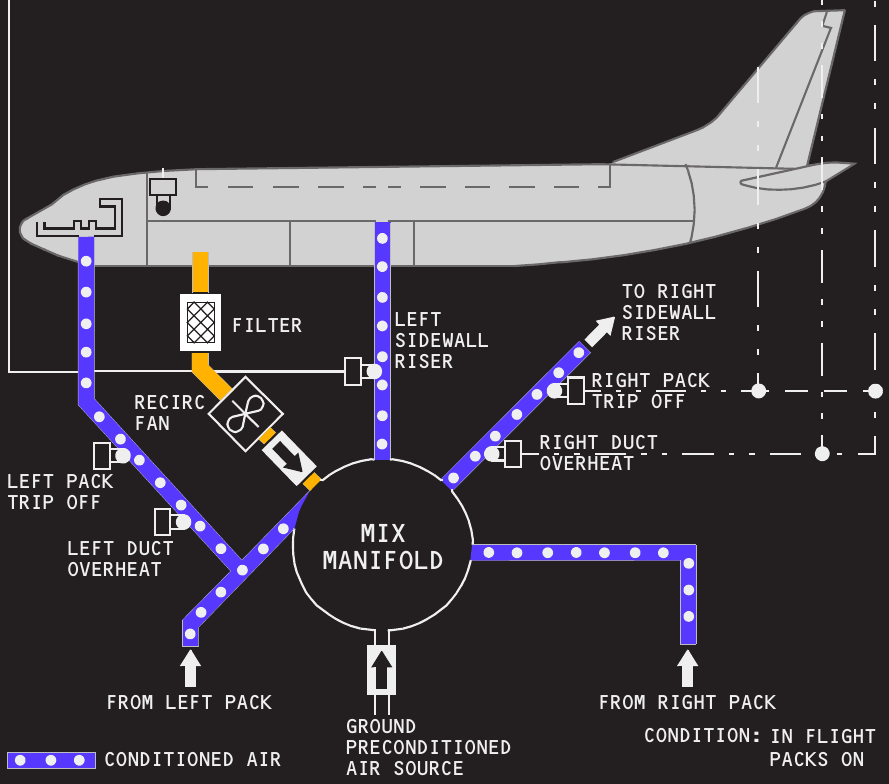 IF the airliner has HEPA filtration yes, so pathogens floating in the air that happen to get drawn into the recric system would be trapped and not recirculated, so some of the total pathogen load in the cabin, but not all, would be removed. In theory, if you just added a fixed amount of pathogens at the start and just let it run, the concentration would slowly decrease. Problem is, if there are sick pax on board they are continuously issuing them, so the filtration is only a mitigation.

If an airplane doesn't have HEPA filtration, effectively, forget it. There are HEPA elements made for older airliners with existing recirc filters under PMA that are a direct replacement, but you won't know which airplane you're on has them. Maybe you can ask when a book a ticket.

In any case, I said "only a mitigation" because the pathogens you are going to be exposed to on the flight are all around you in the cabin and what may be removed by the recirc system really isn't going to help you all that much. If you catch something it's usually because you touched a contaminated surface and then touched your face at an entry point, like the eye, after.

This is why wearing face masks can help in preventing breathing in a pathogen directly, but you usually don't acquire them that way anyway. When you catch a cold from someone in the office, it's rarely because they coughed in your face; it's because you touched something they touched, or coughed on, earlier and then rubbed your eyes or scratched your nose.

People who are very disciplined about never touching anywhere near their faces with their hands probably have the best protection from catching these kinds of things.

Not the answer you're looking for? Browse other questions tagged airliner cabin-design cabin or ask your own question.

0
HEPA filters and Coronavirus
9
How much air is recirculated (vs. bleed air injected) in modern airliners cabin?
0
Why don't airlines place some physical separator between passengers in the planes to prevent the spread of COVID-19?

7
Can an airliner provide ground level cabin pressure, temperature, humidity etc?
24
What is this white smoke like thing, seen inside the cabin before takeoff?
12
What is the viability of stacking passengers in an airplane cabin?
10
Who invented the cabin chime? What aircraft was the first to use it?
2
Who is responsible for getting approval of cabin layout?
3
Is cabin air freshened when a plane is taxiing or on the ground?
1
Can audible warnings be heard from the cabin?
1
How Cabin Pressures Are Selected?
3
Why does the UH-1 Huey have a hump at the rear of the cabin?
1
How much does an airliner cabin elongate at altitude?