Can some or all helicopters have contrails? If only some, why only those? If not, why can they not? Pictures would be really helpful. I do know that turboprops and piston props can leave contrails, but I haven't been able to find anything about contrails on helicopters.

If the temperature and conditions are right, yes.

Any aircraft which has a heat engine that burns hydrocarbon fuel, which is pretty much any reciprocating or gas turbine engine used in aviation, will emit carbon dioxide and water vapor as byproducts of combustion. It’s just a byproduct of the chemical reaction to produce heat energy in the engine. And when the temperatures and humidity in the ambient air are low enough and high enough respectively, the water vapor in the exhaust stream will freeze into ice crystals that remain suspended in the atmosphere for a sustained period of time.

You typically won’t see this at your average airport or from the average helicopter flying over you as the temperatures simply are not low enough at the altitude the aircraft operates at for contrails to properly form. That being said, see picture below. 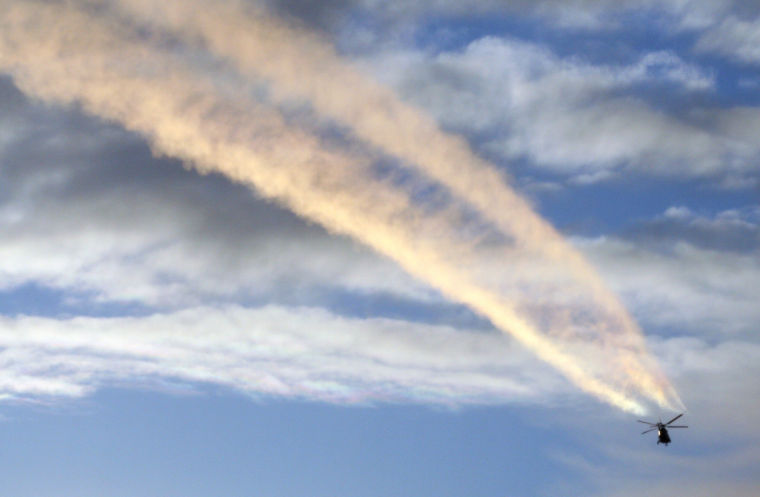 All existing helicopters have their engine exhausts somewhere beneath the main rotor, and that means that the exhaust gases are hugely diluted and dispersed by the enormous downwash from the main rotor. It simply is not possible for a contrail to form under such dilution and turbulence.

25
Do emergency services helicopters fly VFR when leaving base?
20
Why aren't modern helicopters quieter?
33
Are there full scale helicopters capable of sustaining inverted flight?
37
Helicopters: why hasn't NOTAR been more popular?
9
Why don't the contrails show the curvature of the Earth?
1
Can someone identify these two Bell helicopters seen in the Czech Republic?
31
Is this contrail from an airplane or a rocket?