Does the FAA have risk targets for specific activities?

Does the FAA have or publish goal values for various risks?

I'm looking for something that says (e. g.) "We rate passenger airline flights as 'safe' if there are fewer than X casualties per million flying hours" or the like. Even better would be some kind of matrix reflecting "safe", "of concern", "hazardous", "dangerous", etc.

I am not aware of any official FAA document that states such sentence. However, something similar can be deduced from safety requirements related to the development of aviation systems.

ARP4761 is a well-known standard for conducting safety assessments on civil airborne systems and equipment. A probability of failure occurrence associated with the severity classification can be found on page 14, which shows the following table: 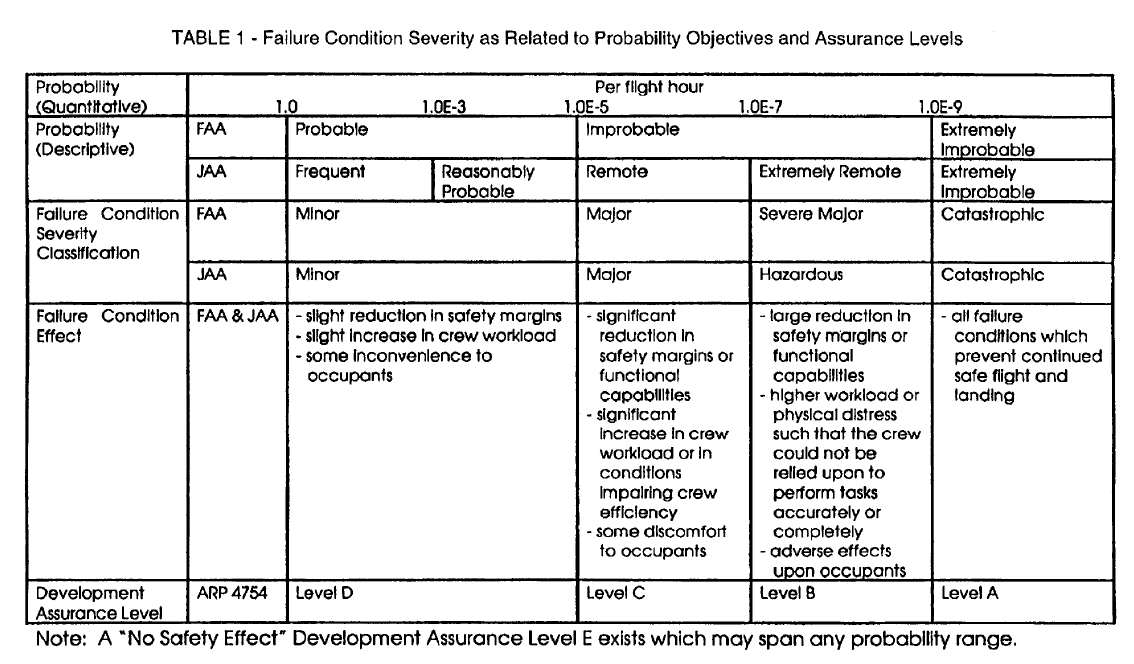 As it can be seen, the maximum allowed occurrence of a catastrophic failure is 1.0E-9. Playing a bit with the numbers, this could be translated in:

One could assume that a catastrophic condition can lead to fatalities, and this seems reasonable. But I'm afraid that this presumption is not written in official FAA publications (I might be wrong).

P.D.: Now, where these probabilities of occurrence come from is another interesting (and un-official) story, but I think is out of the scope of this question for the moment.

Not the answer you're looking for? Browse other questions tagged safety faa or ask your own question.

13
What are the design parameters for airliner safety?

11
What is the “8900” that the FAA uses for guidance?
12
What is an FAA Notice? Does it have legal force?
4
Are test pilots who work for the FAA paid on the GSE pay tables?
4
How long does it take for an FAA licence to be delivered?
10
Does the FAA dictate that bridges are closed for the Thunder Over Louisville airshow event?
5
Has the FAA moved to change its use of gender-specific words like airman?
3
How much advance notice does the FAA have to give for a TFR?
0
When does the FAA require OEM involvement for the approval of an STC?
1
Does the jet blast from a large aircraft pose any risk for other aircraft nearby?