Why are there speed restrictions applied after deicing an aircraft?

The information about the 737 here mentions an interesting limitation:

After any ground deicing/anti-icing of the horizontal stabilizer using Type II or Type IV fluids, airspeed must be limited to 270 KIAS until the crew has been informed that applicable maintenance procedures have been accomplished that would allow exceedance of 270 KIAS. Once the applicable maintenance procedures have been accomplished, exceeding 270 KIAS is permissible only until the next application of Type II or Type IV deicing/anti-icing fluids.

Some deicing fluids can leave a gel-like residue on the airplane. Several incidents occurred with 737s where the residue accumulated in the elevator balance bay, causing severe oscillation/vibration in flight above 270 KIAS. These incidents resulted in the issuance of Airworthiness Directive (AD) 2002-08-20, which required adding the 270 KIAS limitation you discovered into the 737's Airplane Flight Manual (AFM). The required "maintenance procedures" consist of cleaning off the deicing fluid residue. The AD also requires a one-time cleaning and sealing of the elevator balance bay.

The FAA has received reports of numerous incidents of severe airframe vibration, or limit cycle oscillation (LCO), in flight after the horizontal stabilizer had been deiced/anti-iced on the ground. The reported incidents occurred on Boeing Model 737-600, -700, and -800 series airplanes. The empennage structure on these, as well as Model 737-700C series airplanes, is identical; therefore, all of these airplanes are subject to the identified unsafe condition. These events have been attributed to an accumulation of deicing/anti-icing fluid or other residue in the elevator balance panel cavities and on the external surfaces of the elevator tab.

A Boeing article on the subject gives some more information and also has some photos showing the residue. Here's what a gummed-up 737 elevator balance panel looks like: 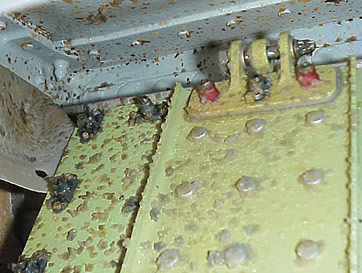 Airplane deicing and anti-icing fluids can leave residue in critical areas in the wings and stabilizers. This residue can rehydrate and expand into a gel-like material that can freeze during flight and cause restrictions in the flight control systems. Therefore, attention to this residue should be part of a regularly scheduled inspection and cleaning process.

Although Type III fluids have not been specifically linked to any events involving flight controls, the composition of these fluids makes them equally susceptible to residue problems as the Type II and Type IV fluids.

Not the answer you're looking for? Browse other questions tagged boeing-737 aircraft-maintenance or ask your own question.

8
Are there differences in tool standards between aircraft manufacturers?
5
Why are there two IRS switches on the 737NG?
37
Why evacuate wing at the front side after water landing?
12
Why are there vortex generators under the Boeing 737's cockpit windows?
42
Why is tape being applied to this jet engine?
2
Why bother tracking TSN after an overhaul?
0
Who can sign off the aircraft after completion of 100-Hour Inspection?
2
What happened to the power plants after an aircraft is retired?
2
How are AOA sensors tested after working on them?
3
Why are the 737's variable-speed generator drives so unreliable?