Are the A320's A and B electrical buses both energized all of the time during flight?

For electric power, I notice that the A320 has two buses: A and B.

Are they both energized all of the time during flight? If not, is there a way to switch between buses?

The power diagram with the two buses looks similar to the Apollo Command Module and maybe the Service Module. I wonder if it was a borrowed idea.

They are both energised all of the time except emergency situations. The essential devices can be switched between them, the non-essential ones will be turned off in such cases. 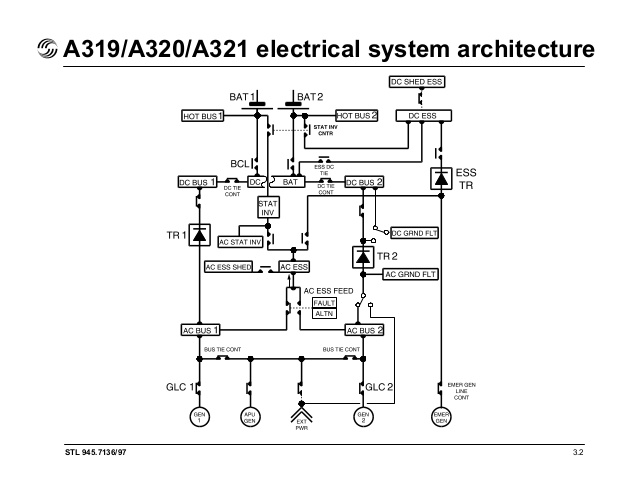 There is actually a couple more buses than two. The main ones, AC BUS 1 and 2¹, are powered by one engine-driven generator each, and are normally not connected. This has some advantages that

The APU generator and external power are connected to a bar that can be connected to either and automatically connects to whichever is not powered. This bar can also be used for connecting the buses in case only one generator is running, and this can be controlled by a switch.

The essential devices, which means most cockpit instruments, are connected to a separate Essential AC BUS, which is normally connected to the AC BUS 1, but can be, manually, switched to AC BUS 2, in case AC BUS 1 does not work. It can also be powered by emergency generator (on RAT) or even an inverter from the batteries when RAT does not work (before it deploys and after landing during roll-out).

The even more important devices, including the flight control computers, are connected to the DC HOT BUSes directly powered by batteries.

So the essential devices can be switched when either bus is not energized. The non-essential devices like galleys, in-flight entertainment and cabin lights, will be powered off in that case. They will also be disconnected if the bus is energised, but does not have enough power (automatic load shedding).

¹ In the document I have they are not called A and B. The document document is (I got it off the internet², so it's not official copy for legal purposes) titled A318/A319/A320/A321 Flight deck and systems briefing for pilots and apparently created by Airbus (in 2007, but it's unlikely they changed this since)

² This or this is a slightly different version (even older, dated 1998), but the chapter 3. Electrical System has the same content. The included image is from the later link.

Interestingly, again in normal operations it is the left generator which takes the most of the electrical loads of the aircraft. Not only does it power the AC BUS 1 and DC BUS 1 but it also powers the AC ESS and DC ESS BUS. These are essential buses which powers the most critical items of the aircraft. The ESS which stands for essential by the way also have SHED buses, respectively the AC ESS SHED and DC ESS SHED BUS.

If the aircraft loses a generator, a BUS TIE operates which automatically connects the two sides of the electrical system. If for example the number one generator fails, the BUS TIE will close the contractors and allow the generator number two to power the left side. If the APU is available it can be started and this will again separate the two sides as the APU generator itself will power the left side. In a situation where you have two generators lost or if you lose the AC BUS 1 and 2, a device called a RAT (Ram air turbine) extends from the left belly of the aircraft. The RAT then powers the hydraulics (Blue hydraulic system) and the hydraulics run an emergency generator. This generator can power the AC ESS and DC ESS BUS. As the emergency generator can only provide AC power, the DC ESS BUS is powered by an ESS TR (Essential transformer rectifier). When powered the RAT the SHED buses are disconnected so that only the most important aircraft systems are powered. 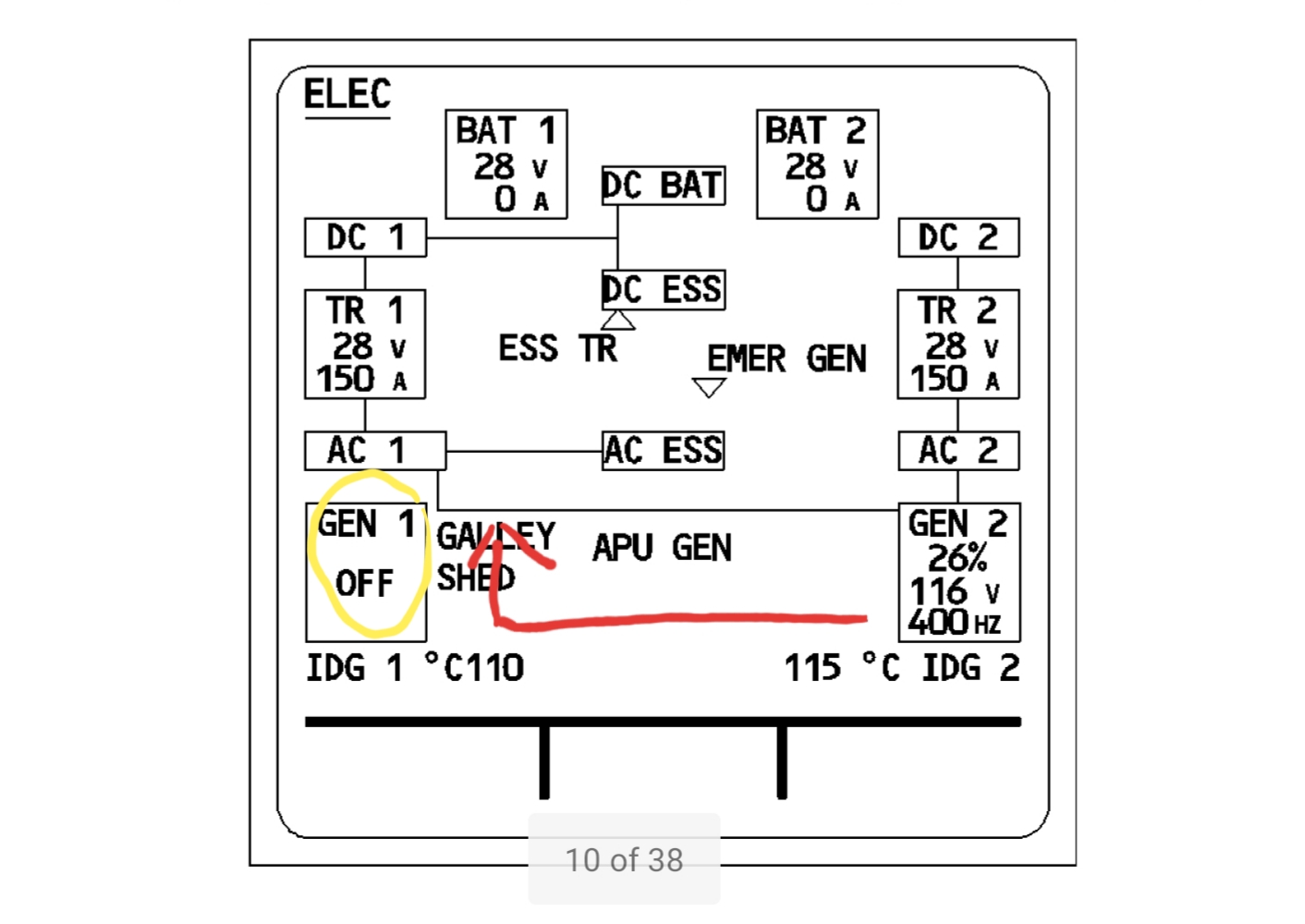 Here you see the GEN 1 failed. The GEN 2 takes over the left side.

In the situation where the RAT fails to work the aircraft can degrade into batteries alone. The batteries are normally disconnected in flight if they are fully charged. When the batteries power the aircraft it again powers the AC and DC ESS BUS. As they are DC, to feed the AC ESS, a static inverter is used. The batteries can power the aircraft for about 22 minutes. But it can be extended to 30 minutes by following a QRH procedure which involves turning the main flight instruments for the flight and relaying on standby ones. According to the procedure the can turn off the only remaining Air data reference (ADR) computer which will then power of all the main cockpit flight instruments. Then you can fly on those small standby instruments until coming in for landing where you can turn ADR back on.

2
What would happen to the rudder on an A320 if both FAC systems failed?
6
What's the acceleration and absolute minimal RWY length for an A320 during take-off?
4
What are the climb rates during the different phases of flight of an A320?
4
Does the A320 autopilot work in flight with both engines off?
1
What are the typical max range and max flight time (endurance) Mach numbers for the A320?
0
What are the BUGS and RST buttons on the A320's ISIS for?
3
How can the landing gear of an A320 be lowered in the event of a simultaneous hydraulic and electrical failure?
5
Why can APU supply both bleed air and electrical power up to 10.000 feet but bleed air alone up to 17000?
1
Why are these steps performed on the A330 emergency electrical checklist?