How can I find telephone numbers for FAA ATC facilities?

It is often desirable to call an FAA air traffic control (ATC) facility on the telephone:

How can one find the non-emergency telephone number for an ARTCC, TRACON, or control tower (ATCT)?

You would think the control tower phone numbers would be listed prominently and conveniently on the FAA website.
You would however be wrong1.

Your best bet would be to contact the Flight Standards District Office that covers your area - they can get you in touch with whatever other branches of the FAA you might need to talk to. You can also get tower phone numbers from Flight Service (1-800-WX-BRIEF).

AC-U-KWIK also has tower phone numbers in a conveniently searchable system (punch in the airport identifier and it will be in the results you get), and the printed edition of the AOPA airport directory used to have tower numbers as an appendix (I'm pretty sure it still does).

1 – Actually that's not strictly correct: some regions publish tower numbers prominently. Most don't, or my search skills aren't good enough to find them.

Near the end of the Chart Supplement there is a list of ARTCCs and airports with 24 hour phone numbers.

The Chart Supplement also has the number for the Airport Manager for every airport. They should be able to get you in touch with the tower if it is not on the list. 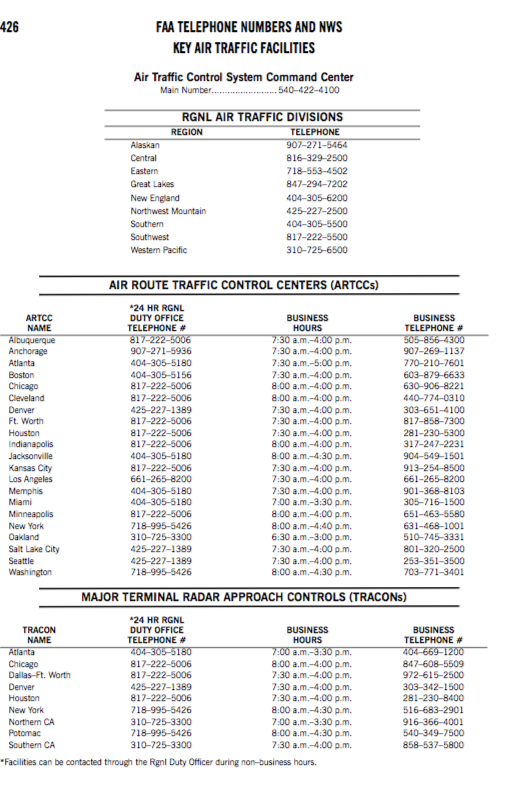 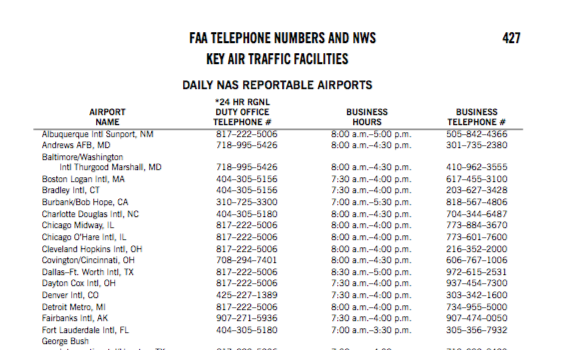 The FAA digital products page that JScarry linked to needs some explanation of how to find the phone numbers. It took me a while to find where the phone numbers are located. Go to the Browse Airports/NAVAIDs map, select your region or state. In the Search Results table, select a "NC" link in "Vol / Back Pages" column. The entire 171 page PDF will be downloaded. Around page 17 is the list of TRACONS, towers and ARTCCs and their phone numbers. They certainly hid the phone numbers well.

Here is another website that appears to be current, but not as detailed as the official FAA document: 123ATC.com It seems to be geared towards a career as a controller.

Not the answer you're looking for? Browse other questions tagged air-traffic-control faa or ask your own question.

16
What is the security policy for getting into a Control Tower in the US?
18
What happens when I tell ATC to "mark the tape"?
12
How do you contact ATC if you want to do RC flying in the US?
10
How exactly am I supposed to notify ATC when I fly my drone? (UAS)
7
TFR based on an invisible VOR?
3
How to relay an emergency to ATC while on the ground?

16
Why are turbine-powered aircraft "considered ready for takeoff"?
4
What is the breakout by service branch for FAA ATC specialists with military backgrounds?
7
Where can I find ATC Guidelines for handling Airport Incidents?
7
How do ATCs choose between Tower, Approach, and Enroute facilities?
14
Can a controller clear you through an SFRA?
1
Could maintenance data be downloaded via ATC facilities?
5
What are these FAA facilities in Seattle doing?
8
How can I find out if the FAA has ever sanctioned a pilot?