Tupolev TU-95 (NATO codename Bear) and Antonov AN-22 (NATO codename Cock) use the NK-12 turboprop engine, and as can easily be seen in many videos available on the internet, their propellers are not geared in a way that would make them turn in equal rpm. 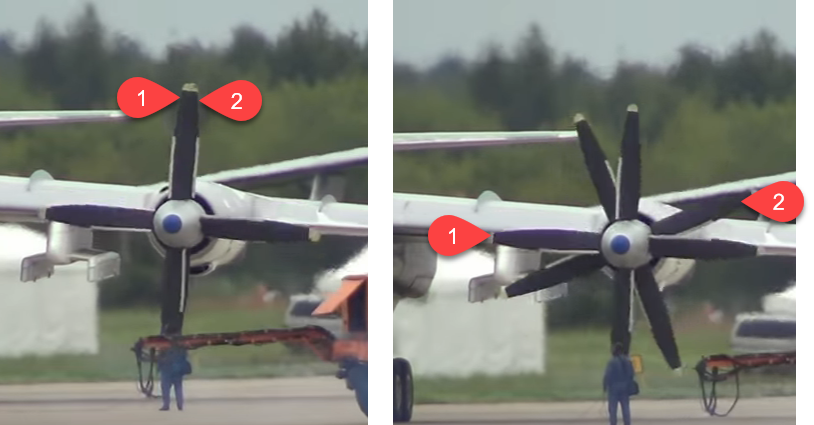 The two frames above show the aft propeller's lag after the forward propeller moved a quarter-turn.

Why such ratios? What is the reason the front propeller has significantly higher rpm compared to the one behind it? The air that has gone through the disk of the first propeller has obviously been accelerated, and has gained a swirl momentum. This would have to be taken into consideration somehow.

My own guess would be that this has to do with the aforementioned flow changes, load distribution between propellers, and/or something with vibrations and resonances of the powertrain.

Please do not hesitate to prove me wrong on this one, but for that to fly, I'd require some hard evidence concerning the NK-12 powertrain.

The NK-12 engine uses a differential epicyclic (planetary) gearbox. Unlike the typical planetary gearboxes where one of the gears is fixed, here all three parts are moving: the turbine drives the sun, the planet pinion drives the front propeller, and the ring drives the rear propeller.

The gear ratios are the same between the front and rear, but the torque is not. The difference you see has to do with this torque difference, as well as with different rotating masses and friction during start. The torque is what is actually important.

If you hold one part, then the other two will be in the expected sync. Say, if you jam one prop and start the turbine, it will simply spin the other prop twice as fast. (But if you jam the turbine, things will be less intuitive: the props should turn in the same direction if you move one by hand). Now if you allow the turbine to free spin, you'll have two degrees of freedom, and the eventual relative RPM in such system will depend on the torque on each prop.

In the explanation below, I use this work by S. Falaleyev et al (pdf in Russian). Here is the diagram of the gearbox: 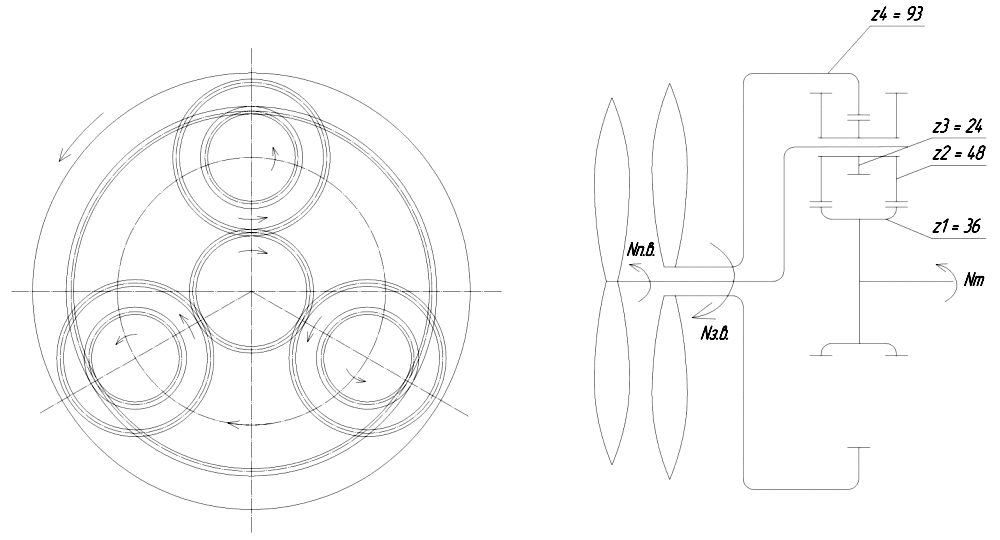 If we assume the torque balance such that the RPMs are the same (except the sign), the gear ratio will be (I skip the derivation):

At the same time, the torque ratio (front to rear) is

Thus, the front prop gets almost 20% more torque than the rear prop. This is why it spins up faster on start-up. (It is also lighter than the rear one).

At the nominal speed, the governor automatically sets a finer blade pitch on the rear prop to equalise the speeds. (Why not just accept higher speed/thrust from the front prop? Apparently, because the prop is limited by the tips speed, and we don't want the front one go supersonic while the rear one is relaxed).

I can't offer the technical backup, but years ago, I read that if the props are designed to run at slightly different rpms, it reduces the otherwise-hellacious sound produced by the contra props. Noise has been an issue with these since engineers started using them (late WWII I think). Of course, none of the NK-12 powered aircraft are known to be "Whisper jets"...

Not the answer you're looking for? Browse other questions tagged propeller engine-design turboprop contra-rotating or ask your own question.