Can a tiltrotor fly safely with one engine?

I am curious about tilt-rotor feasibility (such as AW609) against fixed-wing and rotor-blade aircraft (conventional helicopters).

One important issue that immediately arises in my mind is that both propellers must be highly robust against failures. This is translated in a significant disadvantage against traditional aircraft designs since:

So the big question is: Can a tilt-rotor fly safely (or at least perform an emergency landing) with a faulty engine?

P.D.: For the sake of the question let's presume that the engine has not blown up or has suffered from structural integrity failure (e.g. one blade is missing).

Short Answer: yes. If they could not, they'd likely not get certified

One engine can drive both prop rotors. 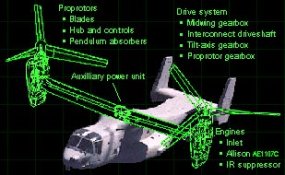 The general approach for single engine flight to a safe landing is to fly at a particular configuration and airspeed, and then to set up the aircraft for an approach to a run-on-landing "between 55 and 65 knots." As I understand the procedures, that final approach will have the nacelles tilted up far enough to prevent the tips of the prop-rotors from striking the ground once the aircraft is on the ground.

Flight Safety Note: I am not going to replicate (cut and paste) these procedures here for a number of reasons, one of which is that I am referring to an out-of-date manual, and some of the details may have changed. I suspect that the current procedures are similar.
Note on the source:
An old version in the A1-V22-NFM-000 series; Part V/Chapter 12; Emergency Procedures. (There will be a similar section in the Dash Ten for USAF CV-22's).

Where a run-on-landing is not achievable, the manual calls for an approach to ...

... maintain the highest suitable air speed until deceleration is required for a no-hover touch down.

This general method is very similar to the single engine procedures that we had in the SH-2F and the SH-60B helicopters that I flew from ships in the Navy. The aircraft's Gross Weight and the Density Altitude of the day will lead to some variations in the "best" airspeed for this; there are tables in the manual (and usually in the pocket checklist) to determine the best airspeed to fly.

A shallow approach into the wind maintaining 30 KCAS until right before landing is recommended.

This is a little bit different from how we did this, and taught this, in those two helicopter models; we would try for a constant angle of descent approach (not a shallow approach) to a spot if we, as was usually the case, did not have single engine hover capability. The resulting landing would be fairly firm, but that was by design.

Not only is single engine flight possible, as well as single engine approach and landing in a tilt rotor, it's a well known flight characteristic that has well established procedures to accomplish. (At least for the V-22. The AW-609 doubtless has similar procedures in its flight manual).

This concern was one of the major design challenges in the development of tilt-rotor VTOL craft. In every flying example I'm aware of, it was solved one of two ways: either the engines were embedded in the fuselage and power was transmitted through a common gearbox (much like a twin engine helicopter), or the engines in the wingtip pods were connected with a shaft that ran through the fuselage from one engine's gearbox to the other, including overrun clutches, so either engine could drive both rotors.

V-22 as an example tilt rotor. You can see the shafts that go from the engines to the central gear box; either engine can drive both prop-rotors.

Of course, there's still the question of whether a single engine has the power to perform a hover landing. From reading, I gather than there are "autorotate" options for these craft -- forward speed being used to store momentum in the prop-rotor system, which can then be tilted to provide lift and clear the blades from the ground for landing. This option will be improved if there is still power from a single engine; partial tilt can be used to add lift and slow landing speed.

Not the answer you're looking for? Browse other questions tagged engine-failure rotorcraft fixed-wing tiltrotor or ask your own question.

30
If a helicopter's tail rotor fails, is it possible to perform an emergency landing?

53
Can the Airbus A380 safely fly with two engines out on the same wing?
17
Can an aircraft continue flying and land safely following an engine failure?
5
Can a plane land safely if it loses power during approach?
9
Can a helicopter really fly with rotors going this slow?
8
Can the four-engined Lockheed JetStar II fly on one engine?
8
Can a Boeing 747 or A380 climb with only one engine?
4
Why aren't quadjets required to remain controllable after a sudden, simultaneous failure of two engines on one side?
15
How controllable is the 737 in single-engine manual-reversion flight? Is it controllably landable (or go-around-able) in this condition?
13
Could an airliner with only one functioning engine recover from a stall?