For a coded departure procedure (SID), Fly-At-Altitude or At-Waypoint instruction has priority in case of conflict?

I am examining various RNAV departure procedures and especially those whose purpose is to overlay the existing conventional ones. I noticed that some of them begin with a "Flight at Altitude" instruction, immediately followed by either a DF or CF leg which end at a Waypoint very close to the associated airport. As a consequence, an aircraft whose initial climb gradient is small enough will reach the specific altitude well after it has passed the aforementioned waypoint and as a result, if the CF/DF leg must be followed, it must fly backwards in order to comply.

Below I provide its equivalent description, as it is included in Eurocontrol's AIP library for German procedures:

The problem is that fixes DF134 and DF135 are near runway's end. As a result, if the aircraft climbs even with 500ft/NM, it will still fly over those fixes. Or in other words, the aircraft will reach those fixes well before it climbs at 800ft. 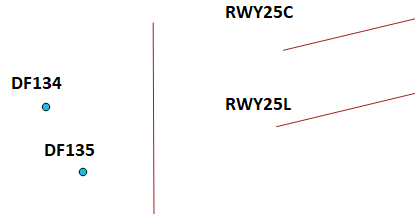 If someone could point me in the right direction I would highly appreciate it.

EDIT: As J. Houggard aptly stated, an assigned adverse minimum climb gradient should exist for preventing this conflict from taking place. However, no such climb gradient is assigned, according to the following table (source: Eurocontrol AIP Library). 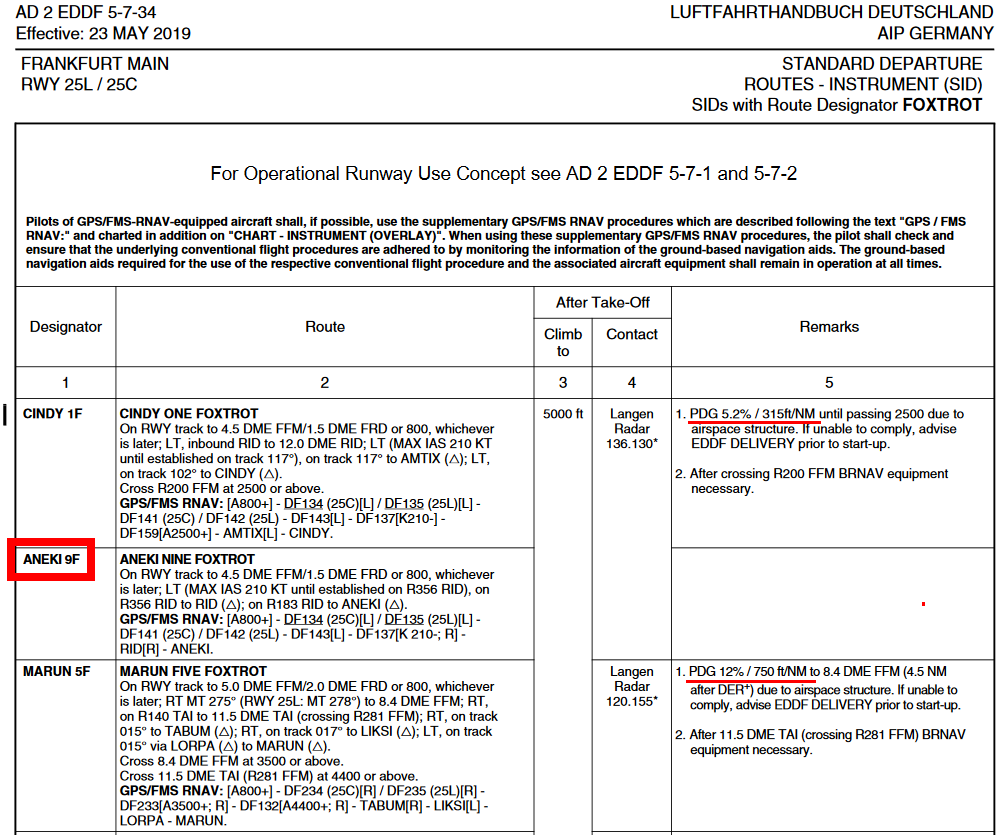 Even if the table implies that the assigned climb gradient of CINDY1F procedure also applies to ANEKI9F (315ft/NM), it is still not enough.

The equivalent encoding is:

The meaning of this is climb to an altitude of 800ft or above, then after passing DF134/DF135 turn left.

From this EUROCONTROL document (Guidance Material for the Design of Terminal Procedures for DME/DME and GNSS Area Navigation(PDF)):

[Speed, track and altitude constraints are contained within square brackets.]

If [A Set of Constraints] is not preceded by a waypoint name, the last calculated track must be flown until the constraint is reached

The turn will thus not be initiated before both the 800 ft altitude and the waypoint are reached.

Not the answer you're looking for? Browse other questions tagged icao departure-sid fms icao-sarps arinc-424 or ask your own question.

1
Is it legal for a non-IFR rated pilot to fly a SID on a VFR flight?
2
How do flight procedure designers decide when to assign an altitude constraint to a waypoint?
11
How to know that single engine aeroplanes are not allowed to depart on the TETAN SID?
0
Is there a manual which describes the algorithmic procedure on which the Vertical Navigation Guidance is based?
7
How would an aircraft fly PIKES ONE departure procedure of Denver Airport?
1
What is the proper phraseology for a clearance with a named obstacle departure procedure?