Where does the Garmin G1000 Nav ID come from?

If you tune in a NAV frequency into your G1000 the ID of the Nav Aid will be shown next to the frequency after some time. In this example SEA: 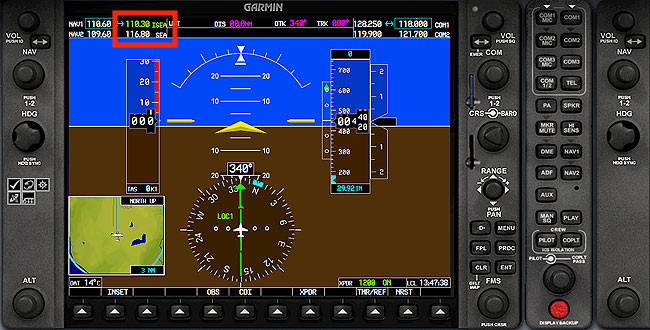 How does this work? Because we know that there is the possibility that two VORs could have the same frequency, so the frequency is not uniquely bound to an identifier.

I have two assumptions:

Which one is right, or is there even another way Garmin does it?

Garmin doesn't explicitly state the method in the documentation I can find, but I believe the answer is #1. It decodes the Morse code and displays that value. I say that for two reasons:

First; Garmin, like most successful aviation companies, makes it a habit to reuse technology where it can. Volumes are low and certification costs are high so using the same NAV receiver in more than one product saves costs and increases profit. From their web site, the GNC 225 decodes the ident.

Second; the fact that it takes several seconds for the ID to display indicates it's being decoded as it has to be received before it's displayed. If it were pulled from the database, it would be available almost instantly.

Since the only way to verify that you are receiving the correct signal from a working VOR is to listen to the Morse Code, it is very likely that the G1000 is decoding the Morse Code. If it were only using the database, the pilot is likely to miss a test code or the fact the code is missing all together in the case of a facility under maintenance.

Not the answer you're looking for? Browse other questions tagged avionics vor navaids g1000 or ask your own question.

3
How to interpret the electrical information on a G1000 T206H?
11
How does the ADF null positions find where the NDB is?
5
Is it possible to isolate COM1 and COM2 on a Garmin G1000?
9
Is it possible to load (and not activate) the approach procedure on a Garmin 1000 or 430?
0
Changing the interception angle in autopilot for OBS or VOR in the G1000 from 30 to something more aggressive
4
What Makes G1000 NXi Different From G1000?
1
Does the nearest function on a G1000 allow for listing of anything other than nearest airports?
1
How does the G1000 differ from an airliner’s avionics?