Can Flex thrust be lower than climb thrust?

Let's restrict this question to airliners with 2 jet engines.

For the remaining of the question, I'll use the term flex to designate reduced take off thrust as I'm more familiar with airbus's systems. Flex will be the thrust selected when thrust levers are in the flex detent and climb thrust the one selected when lever are on the "climb" detent without autothrottle engaged. I assume other manufacturers have an equivalent way to easily select those values.

Both flex and climb thrust are lower than TOGA thrust. In good condition (long runway, good weather, almost empty aircraft,...), how low can flex thrust be? Can it be lower than climb thrust?

In this case, what is the rational for accelerating from flex to climb thrust given flex is made to increase engine lifespan by reducing thrust?

Yes. On the CF-34 family, in theory, a maxed-out flex setting can be in the mid 80s N1 whereas climb thrust is normally high 80s/low 90s, and you could see thrust rise when setting climb if an extreme flex setup (max Assumed Temperature) (or in the case of the non-fadec engines like the 3B1, the climb bug appears at a higher value than the flex take-off thrust bug when you select "climb" thrust in the FMS)

The reason is to do with what you might call the mission priority of the two settings, and where the actual benefit in flex lies.

With flex, the priority is distance and gradient for obstacle clearance. The flex setting is the lowest setting that meets the takeoff and initial departure performance requirement for accelerate/stop and initial climb gradient for that runway and all up weight. The benefit of using the lowest setting is only partly from lower temperatures; an even bigger factor is erosion from silica particles (outdoor dust) which is most severe below 1000 ft. The dustier the environment, the larger the flex benefit. (In the Middle East, CRJ operators were wearing out engines after only 5-7000 hours because they were doing max thrust takeoffs all the time and had to be cajoled into using flex.)

Climb thrust has a time priority, from an operational balance-of-factors perspective. You want to get to altitude in an optimized time-related profile (as soon as possible taking various things into account), and an optimized time-related profile can require more thrust than the minimum required to meet take-off performance, in cases where a very large flex allowance is available allowing minimal take-off thrust. Setting climb thrust that is a little higher than the flex take-off setting has little negative impact on engine life because you are now high enough that the erosion impact is negligible so there's little engine life benefit to a slower climb to altitude and you might as well optimize climb thrust to get there faster.

Can Flex thrust be lower than climb thrust?

For Airbus, no, it cannot. Because as you've noted, there's no rationale for it. 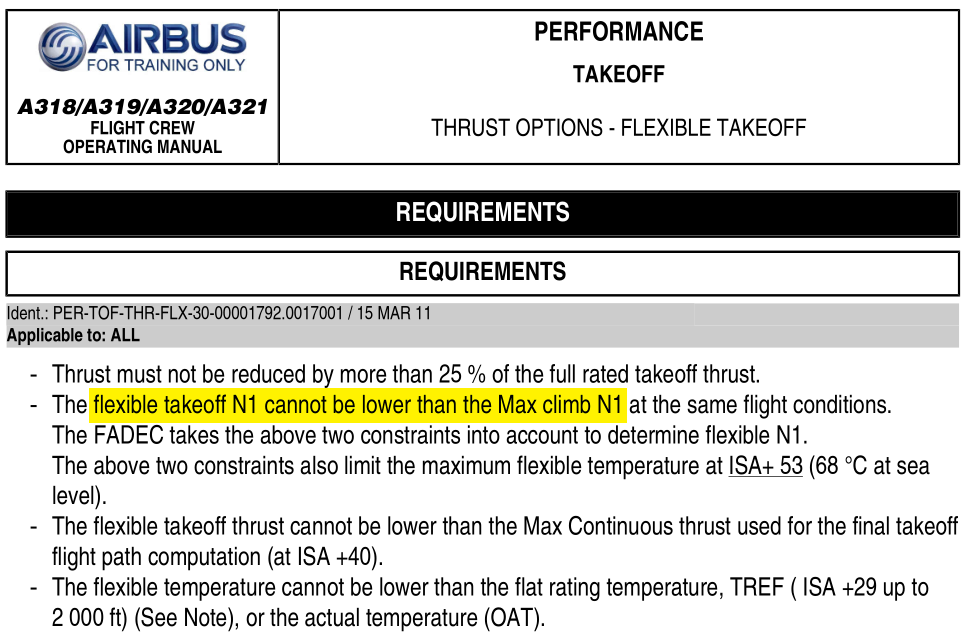 Boeings use Climb, Climb1 (-10%) and Climb2 (-20%) and the FMC picks the suitable Climb power to go with today's Takeoff power. So a full derate will end up with Climb2, whereas a partial derate may need allow Climb1.

Not the answer you're looking for? Browse other questions tagged jet-engine thrust or ask your own question.

16
How do rocket engines produce more thrust than aircraft jet engines?
10
Is the takeoff power always maximum?
4
Why does lower atmospheric pressure produce higher EPR (thrust)?
9
Why isn't there some optional setting that can precisely move thrust levers jointly?
3
Can a Bombardier CRJ derate the takeoff thrust?
0
Can tailwind produce reverse-thrust?
3
Is thrust larger than weight in a vertical climb?