Lift force over the wing is said to be of elliptical distribution if the lift per span ($L'$) along the wing span is of the following:

where $\rho_\infty$ is density of the airflow, $V_\infty$ is the free-stream airspeed, $b$ is length of wing span, $y$ is lateral coordinate along the wing (0 being wing root), and $\Gamma_0$ is the circulation at wing root.

The above is essentially an equation of an ellipse, and hence the name elliptical lift distribution.

In low Mach flight, it can be theoretically demonstrated that an elliptical lift distribution produces the least induced drag for a given flat span. Induced drag of a lifting surface in incompressible flow can be expressed as (Ref Anderson, Fundamentals of Aerodynamics):

where $C_L$ is the lift coefficient, $A$ is aspect ratio and $e$ is the span efficiency factor.

For a flat span, $e$ must be smaller or equal to 1, and it's only equal to 1 when the lifting surface has an elliptical lift distribution.

In the case where the span is not flat, either because it has dihedral or is curved, it has been theoretically demonstrated that a non-flat span can achieve lower induced drag than a flat wing of equal projected span. This forms the theoretical basis behind winglets, end plates, spiroids, etc.

However, if we compare the non-flat wing to a flat wing whose length is that of the unfurled non-flat wing, the flat wing always has lower induced drag. That is, if there is no limit on the wing span length, elongating it is always better from an induced drag perspective. 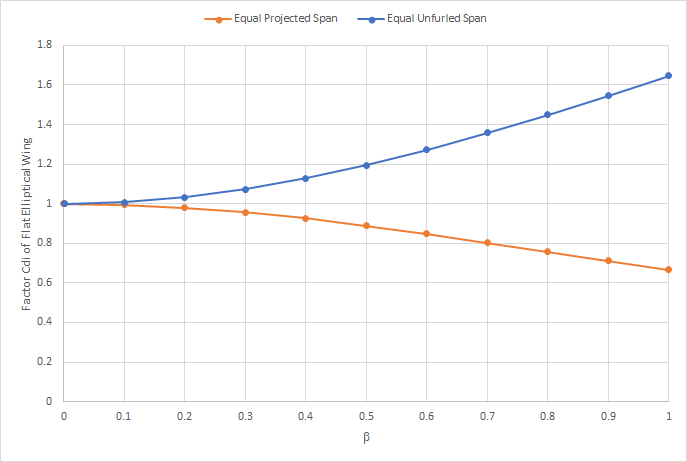 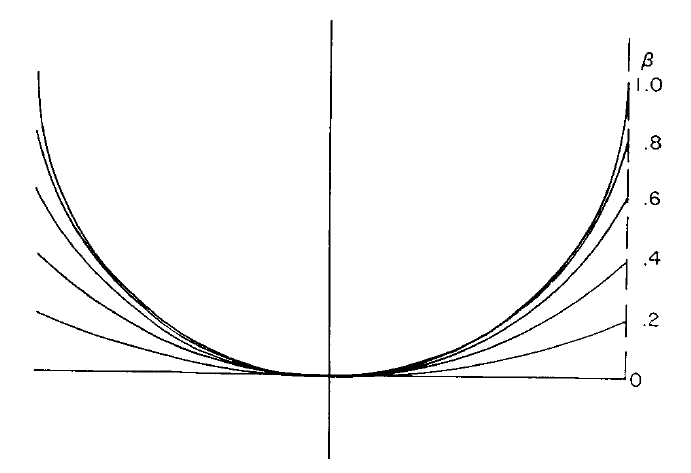 Not quite. The elliptical lift distribution (read JZYL's answer for an explanation what it is) will only give the least amount of induced drag for a given span. That means that wings with more span and a more triangular lift distribution will be lighter, thus needing less lift and, consequently, producing even less induced drag than that elliptical wing. This was shown by Ludwig Prandtl in 1932 and R.T. Jones in 1950. For his elegant proof, Prandtl used the moment of inertia of the lift distribution which is smaller when more of the lift is concentrated near the wing root as a proxy for wing mass.

This is true for all realistic lift distributions. Even a triangular wing (one with zero tip chord) which has its highest lift coefficient near the tip will have its lift drop to zero at the tip. The reason for the low induced drag can be found in the downwash, which is constant over span for an elliptical lift distribution.

Is this planform generating the least amount of induced drag?

… this wing planform is most efficient among other planforms in subsonic flight.

No, and on top of that it has unpleasant stall characteristics. Next, scaling laws have also a say what planform gives best efficiency. Large aircraft are better off with a smaller taper ratio.

Because I heard lot of versions.

Oh yes, there is a lot of mythology to be found on elliptical wings. Mostly because of oversimplification. I prefer to keep things as simple as possible, but no simpler. That is why this answer has become so long.

21
What dictates the aspect ratio of an aircraft's wing?
9
For the elliptical wing, which property is actually elliptically distributed?
12
How is the induced drag calculated for a wing with elliptical planform?
6
Does an increase in lift always cause an increase in lift-induced drag?
8
Why does the elliptical wing have the lowest drag?
2
Why is a rectangular wing planform less efficient than others?
1
Can winglets be used to compensate the high induced drag created by a low aspect ratio wing?
1
Why does each part of span not produce equivalent downwash?
1
Is there an ideal lift distribution for human-powered aircraft?