I’m wondering about the impact of downwash on lift generation. I've read that, because downwash creates lift according to Newton's third law of motion, increases in downwash due to greater AoA (especially when augmented by devices such as slots and slotted flaps, which use various aerodynamic effects to increase the amount of downwash generated) result in increased lift. But I've also read that ground effect increases lift by decreasing downwash, so I'm confused how this works. Can someone clarify the effect of downwash on the amount of lift generated and tell me whether I've got it right or not? Thanks!

Downwash is behind the wing and is the result of pressure differences between the top and bottom of a wing. Although the energy conservation bookkeeping says the plane goes up and the air goes down, the main driver of lift is pressure differential. True to Bernoulli, the angled bottom wing slows and increases air pressure beneath the wing. This is "bottom lift" that even simple flat plates have.

Airfoils also deflect air upwards and away from the top of the air foil, creating additional lift above the wing. Downwash is created by the movement of air from higher to lower pressure as the wing goes by, filling the void where the wing was. This constant process is known as circulation.

Ground effect may not be directly related to downwash, but may be indirectly, as the ground and the downwash stream may create enough of a "fence" to slightly raise the pressure under the wing. A Cessna 172 has a wing area of $174 feet^2$.

A pressure increase of 0.01 psi from ground effect adds 250 extra pounds of lift!

Ground effect is also said to be caused by the wing tip vortices being disrupted by their proximity to earth.

This is a most excellent question. I've struggled with this for a while. From a Newtonian perspective, there must be momentum transfer from the flow to the wing in order for the wing to gain lift, which necessitates in the generation of downward airflow. Let's call this downward airflow downwash.

However, from the circulation theory of lift, which holds incredibly well for low Mach aircraft, downwash is the source of induced drag (note that this theory does not account for viscous drag or form drag from flow separation). Furthermore, this drag is the result of reduction in lift, due to downwash; increased downwash equals more reduction in lift and more induced drag.

Consider the elliptical lift distribution (which for all intents and purposes, can be considered a typical wing distribution for low Mach lift, without loss of generality), the downwash over and behind the wing is constant across the span of wing, and can be expressed as (Ref: Anderson, Fundamentals of Aerodynamics):

where $w$ is the downwash, $C_L$ is the lift coefficient of the wing, $S$ is wing reference area, $b$ is the wing span, $V_\infty$ is the free-stream airspeed, $A$ is the aspect ratio.

Induced drag, for an elliptical distribution, can be expressed as: 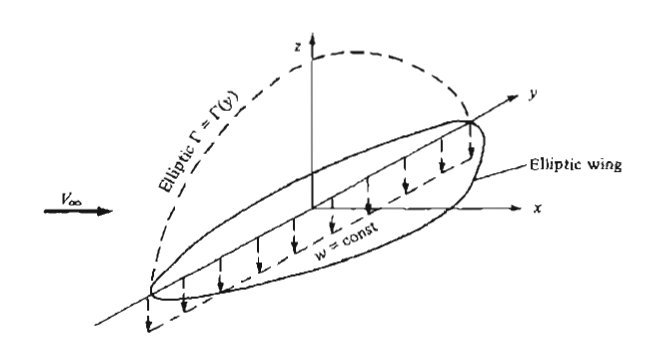 In other words, while downwash is necessary for lift, it also results in (induced) drag; increasing the aspect ratio makes downwash more efficient at generating lift and reduces (induced) drag.

In ground effect, the exact same thing happens as the reaction from the ground makes downwash more efficient at generating lift. This is manifested, once again, from a reduction in actual downwash for a given lift coefficient.

Strictly, the more wing lift is created the more the downforce on the air. They are equal and opposite forces.

But if the ground is in the way then the downwash gets spread sideways and its net downward component is reduced. This raises the local pressure between wing and ground, increasing lift.

Not the answer you're looking for? Browse other questions tagged aerodynamics lift principles-of-flight or ask your own question.

1
Why is a reduction in lift called 'drag'?
8
Does ground effect scale 1:1 with wingpsan?
1
What is an example of a quantitative analysis for the lift using Newtonian mechanics?