What integration of aircraft propulsion would be more efficient at sea level high speed flight? A turbofan, unducted fan or a turbojet?

For educational purposes I am designing a small single seat twin engine aircraft that will be as efficient as possible at sea level and at a variety of speeds 150-500+ mph. The goal is to be able to travel long distances at high speed while offering great acceleration and loiter characteristics.

All of the information I've found is regarding cruising altitudes where at speeds of 400mph or less the turboprop is more efficient then a turbofan. 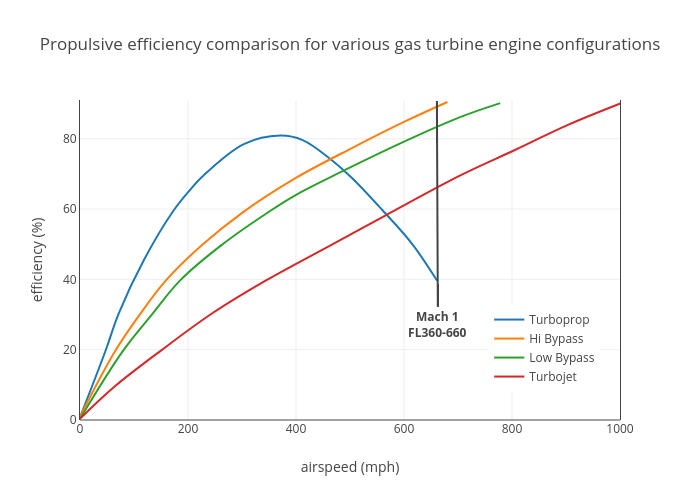 The chart below shows the results at altitude.

My top two choices are a variable pitch unducted fan or a high bypass turbofan. Both would be mounted in the wing with unducted unit having the blades aft of the wing. Both could possibly include afterburner for accelerating to top speed.

None of these charts take into account the drag of the different sized engines and their respective arrangements. The TSFC is usually quoted at design intention or static thrust and not sea level at high airspeeds so it's hard to compare known engines.

The turbofan aircraft could likely be designed quite a bit differently as you could use thrust vectoring and a variable nozzle reducing the number of necessary control surfaces and therefore drag which is extremely important in the thicker atmosphere.

Penguin ancestors took to the sea for food, not to set speed records. There is absolutely no reason to design an aircraft to cruise at sea level. Plus you take away a very important lifesaver in the event of engine failure, the glide. Far better to fly in thinner air, where true airspeed can be pushed all the way to your Mach limit while the indicated airspeed is far lower.

Simply apply your graphs to higher altitudes for greatest efficiency, and, unless you plan to go over 400 knots, the turboprop should be your choice, unless you find a good mechanic for your turbo-compound radial.

The weather is also a bit smoother up there too.

I was trying to find an article about propfan efficiency I've read, since I recall a propfan fitting your specs quite nicely. I'm sure you have read more on propfans than just the Wikipedia article? Roughly speaking a propfan would combine some of the best aspects of turbofan and turboprop in a way that would be beneficial for your project.

However, during my (so far unsuccessful search) I stumbled upon this: multiple purpose subsonic naval aircraft (mpsna) multiple application propfan ... (pdf), at a fast glance this seemed interesting and some of the mission profile kinda matches yours, right? Comparisons between propfan and turbofan start at page 138.

It is an old paper, but check it out.

Not the answer you're looking for? Browse other questions tagged turbofan propfan or ask your own question.

33
How does a fan differ from a propeller?
1
Proportionally, what is more affected by a hot and high takeoff - a electrically driven propeller or a turbofan?
4
Does the P&W F100 turbofan engine of the F-16 really produce this much power?
2
Why can’t the newest high-bypass turbofans run at their EPR, temperature, and RPM limits simultaneously at sea level?