The wikipedia Quadcopter entry provides some details about its flight control: 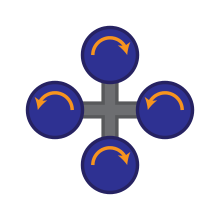 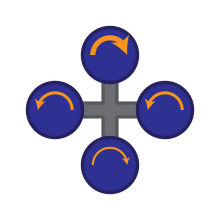 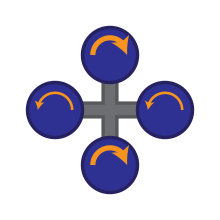 The following post "Quadcopter flight modes beyond traditional aircraft?" raised to my attention that it had other flight modes apart from those of fixed wing aircraft but I am not so sure with respect to conventional rotorcraft.

As commented, a quadcopter is generally flown by a computer. Given command inputs, the computer controls the speed of the four rotors, as shown in the images included in the question. The four rotors give the quadcopter a wide range of maneuverability. This is why quadcopters are currently used in many research applications. They can simulate conventional fixed-wing flight, helicopter flight, or something completely different.

A quadcopter could certainly be flown with conventional helicopter controls. The four rotors allow it to be controlled by a cyclic, and the differential rotor torque allows it to be controlled by the anti-torque controls. However, unlike most helicopters, most quadcopters have fixed-pitch rotors. This is probably mainly due to size and cost constraints. The small size of quadcopters, combined with the lift being distributed among four rotors, allows each rotor to be smaller and much more resposive with RPM than a large rotor. This means that instead of collective and throttle, most quadcopters will only have throttle. Controlling the speed if the individual rotors is the end-result of their control algorithms.

Yes a quadcopter can be flown with the four conventional helicopter type controls, which need to be translated into rotor speeds by a control loop, as follows:

Throttle is not required as a separate control, it is effectively the rotor speed which is used in the other four controls.

Not the answer you're looking for? Browse other questions tagged flight-controls unmanned-aerial-vehicle rotorcraft quadcopter or ask your own question.

85
Why haven't quadcopters been scaled up yet?
10
Does a quadcopter have flight modes beyond traditional aircraft?

10
Does a quadcopter have flight modes beyond traditional aircraft?
5
How is the flight of a tricopter controlled?
6
If the Quadcopter is a MIMO Nonlinear System, How Can it be Controlled using PID?
3
Could a quadcopter fly if its propellers were encased in cylindrical tubes?
5
Why do some helicopters have such complicated flight control mixers?