Is it possible for a plane to be over fueled (and over-weight) to take off?

I've just reached my destination after 33 hours going from one European hub to another. A journey which usually takes a max of 6 from leaving my house!

On the final leg of the journey, after boarding, the pilot asked for volunteers to leave the plane as they were too heavy to take off.

They had flown a 50 min flight from my final destination to where I was and, without fuelling, were turning around to go back. They were adamant that the plane was too heavy and (with a print out from one of the flight computers in hand) were asking for 27 people to leave the flight.

Maybe they flew with no passengers, but exceeded MTOW after adding more passengers and luggage?

Any suggestions for question re-phrasing or additional clarity are greatly appreciated.

The aircraft you flew on was D-AIUX, a Lufthansa Airbus A320-214. On 10 February it was scheduled to fly from Munich to London, but the flight was cancelled due to the storm:

If the aircraft was fueled for this flight the day before, it would need:

After actually flying the 356 km to Vienna, it would have burned about 1.11 t of fuel, resulting in a total weight of:

The MTOW (Maximum TakeOff Weight) is 78 t, which would therefore still leave 32.06 t for payload, but the maximum payload is 19.9 t for the A320. So this cannot be the limiting factor.

It was noted that the runway could limit the takeoff. Your flight departed from runway 29, which is 3500 m long: 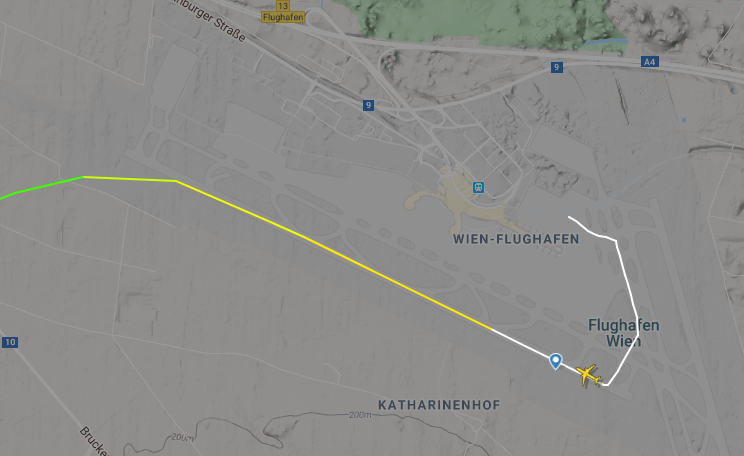 The A320 only needs 2100 m at MTOW for takeoff, so this was also not the limiting factor.

You said "they filled the plane in Munich the day before to give the plane more balast to cope with the storm winds", which is not a procedure I am familiar with. Increasing the aircraft weight will increase its inertia and therefore make it less susceptible to wind gusts. Let us assume they completely filled all fuel tanks in Munich.

Yes it is. While waiting for a delayed departure from Dusseldorf some years ago, the ambient air temperature rose enough during the delay to reduce the density of the air enough that the plane was overweight for takeoff. They fixed the problem by pumping fuel out of the plane to bring it back within max limits.

We then hit headwinds on the flight to LAX and were forced to make an unscheduled stop in Winnipeg to refuel the plane because had the flight continued, it would have been burning its minimum reserves prior to arrival.

No one on that flight was very happy.

That doesn't sound so much like that aircraft was over fueled but simply exceeding another metric called maximum zero fuel weight or possibly the maximum ramp weight. Refueling is not required to exceed this, if the aircraft is overbooked or has a particularly heavy load of passengers and/or cargo. I suspect this was the motivation on the part of the flight crew to make the decision they did.

Not the answer you're looking for? Browse other questions tagged commercial-aviation fuel-consumption or ask your own question.

50
Why are the lights inside commercial airplanes turned off during take off and landing?
13
Can a commercial airliner be too heavy to take off?
3
How many minutes between jetway (air bridge) detachment and take-off?
14
Which commercial aircraft can stay in the air the longest?
5
Are there rules about using the “Fasten seatbelt” sign outside of take-off/landing/turbulence?
14
Why can a plane land in zero visibility conditions but not take off in zero visibility?
6
Reclined seats for take off and landing
12
Are there passenger flights with stops in the middle?