Double deck vs wide body airliner, why would anyone build a double deck one?

I don't understand why double deck aircraft (or multiple decks in general) are a good idea. They must be, because there is a significant amount of them.

But given a cross area, which should roughly correlate to the drag of the body, wouldn't a wider cross area provide some additional lift for "free" as compared to having higher lift wings instead?

Why don't we see very wide airliners where the body provides a siginificant amount of lift?

With the wing or main gear supporting the center of the fuselage, the front and back are cantilevered. Think of a hard landing or 2.5G pull up. The most effective structure to support bending is tall, with material on top and bottom (like an I-beam). A flat fuselage would have to be heavier to provide the same strength.

Depending on how you shape it, you're trading wasted space above and below the cabin for having an efficient pressure vessel shape. If you want to fit standard cargo containers below, that constrains your options.

Although you may get some amount of lift from the fuselage it will probably still push the wings and engines outwards by some amount, creating issues with gate width limitations.

In order to meet evacuation requirements, there would need to be more doors or at least emergency exits for a given length. That could mean more cross aisles and less room for seats. It may also be easier to access multiple doors for passenger to board/disembark if they are on different levels than the same level.

Well, you only need so much vertical height between decks, say 7 or 8 ft, so once the tube diameter gets so big, you end up with simply too much wasted overhead space. Might as well jam some people up there, which means putting a second deck in.

The fuselage is under pressure at altitude, and acts as a pressure vessel. The lightest pressure vessel we can build has a circular cross section. The wide body you mention sounds like a blended body shape, which may add lift but also weight as this answer mentions.

We only need a certain height to walk around in a fuselage. Build a larger aeroplane with a circular cross section, and at a certain point we can fit twice the walk-around height on top of each other. 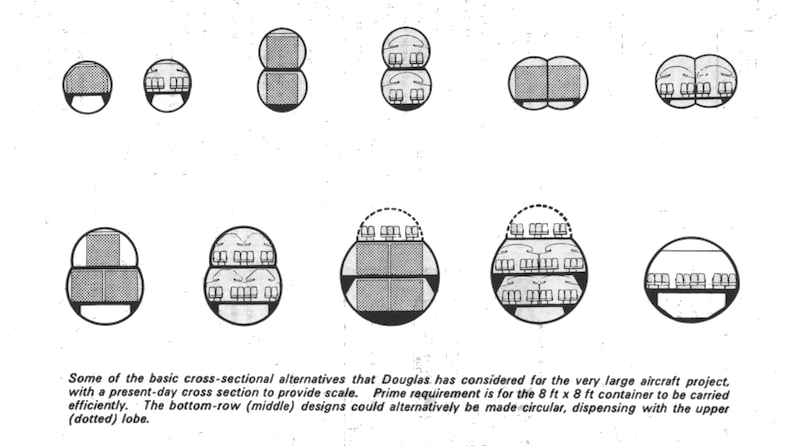 Picture above is from Torenbeek, Synthesis of Subsonic Airplane Design, and shows the cross sections considered by Douglas for what ended up to be the DC-10. All connected cross-sections are circular, with a straight panel (floor, wall) at the connection points to absorb tension. 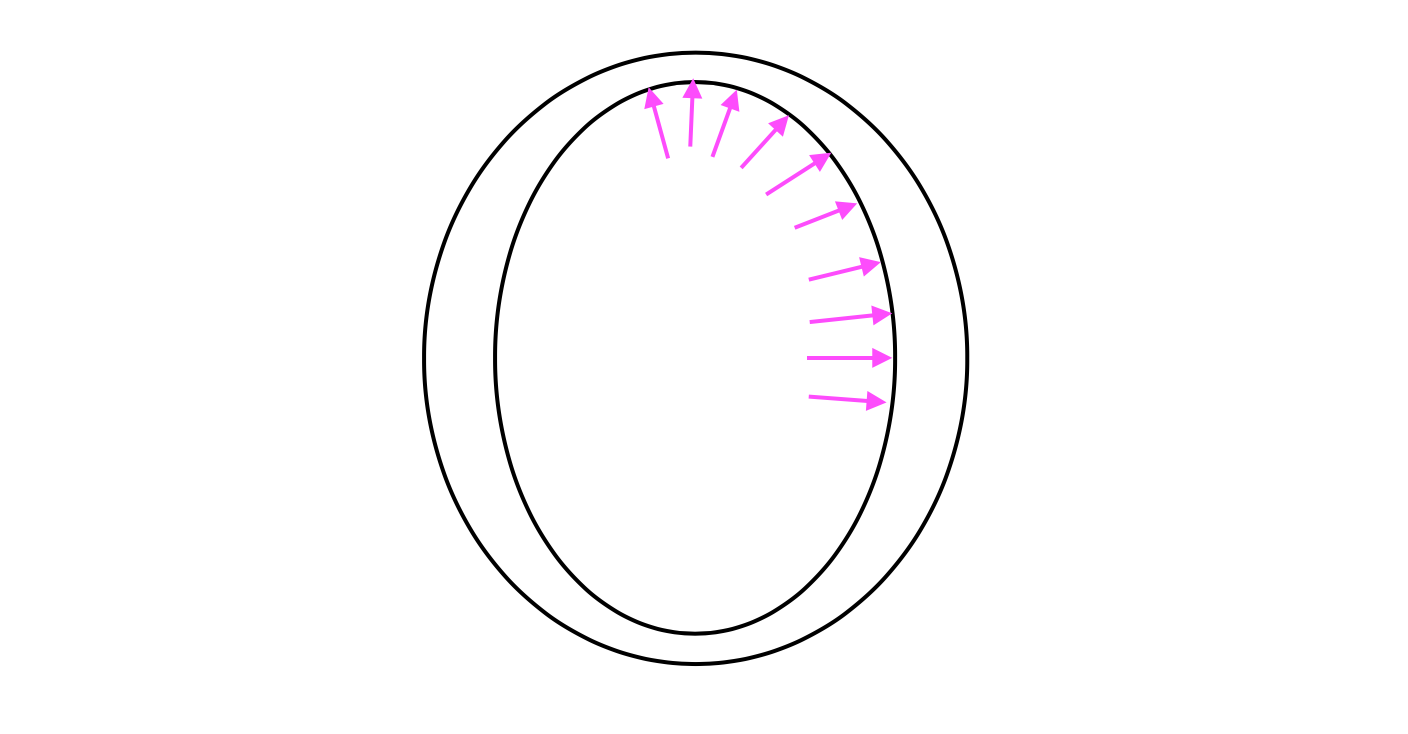 Elliptical cross sections are very sub-optimal - the section with larger radius wants to expand more and needs to be stiffened by a wider rib section, ending up with an almost circular cross section at the expense of much added weight.

The fuselage does not provide a useful amount of lift. Wings are far more efficient at this. You need high aspect ratio for efficient lift generation - a fuselage is much less than 1.

The best structural efficiency is provided by a fully circular fuselage, or by one that is a bit taller than it is wider - a contest between lower hoop stresses and a taller beam. A wider fuselage has both more hoop stresses and more longitudinal stresses.

About half the airliners are non-circular, but they're all taller than they're wider.

There are several factors that determine the cross section of a passenger aircraft; the most obvious one is that absolutely nothing is for free - there can be no unjustified weight/surface area/volume/complexity/uncertainty in aircraft design - everything is counted, everything is assigned a priority.

Also obvious is that passengers are higher than they are wide, for logistical purposes.

Then there is that a pressurised vessel composed of the thinnest, lightest, cheapest possible material wants to assume a circular shape.

Less obvious is that passenger aircraft are not built on a keel, or ladder frame, or chassis, or assembled from self-contained modules. The rib & stringer frames you see in aircraft factories are quite fragile & vulnerable until they are skinned - even then they have little strength until final assembly. Fuselages are more like an inflated condom made from postage stamps, rather than a short section of sturdy water pipe. The fuselage has to be many things, bridge, tunnel, pressure vessel, dangerous goods storage, bus, storm shelter, gasworks, auditorium, and always make more money than it costs.

To save weight, & solve as many other engineering problems as possible, the fuselage & floor are designed as a tension structure. Any glance at a cross-sectional diagram will illustrate this, it's easy to imagine a cable holding in the sides instead of floor beams. Of course the floor has to carry vertical loads of passengers & equipment, but that's separate to its contribution to the entire structure.

There really aren't that many double deck aircraft; 747s have a quarterdeck area behind the cockpit that has seating, but that's more a historic quirk, rather than the reason for its success; it was designed as a bar/lounge area. Turning it into limited seating worked because it was, well, limited. The A380 has been a gallant failure,there will be less flying every month. .

A second deck on an aircraft just can't create more problems than it solves. Even when the problems are external to the aircraft - terminals, financing, politics, etc.

If you wanted to have a fuselage wider than it is high, the floor would need to become a heavier compression structure (as pressurisation tries to circularise the fuselage), now subject to bending forces that need to be braced against, adding to structure, adding to weight, adding to cost, depriving space from revenue-earning volume, adding to costs, and so on.

And that's just the floor. You've now changed the shape of the tube you're using to join the tail to the wings & the wings to the nose. You've massively increased the strength of the fuselage in yaw (the least important parameter) while weakening it in pitch (really important), plus probably introducing new, very novel, twisting tendencies into your combination tension/compression structure.

This can be ameliorated by having two circular cross-sections next to each other, instead of a wide ellipse, with the circles overlapping & a vertical wall, or series of posts, or tension members of some sort, running down the length of the cabin.

Part of your sales pitch to the airlines for a very wide cabin was that they could vary whether it was 13 across or 22 across or a flying tapas bar or whatever they desired. Except that now, for the first time, they have an aircraft with a physical divider down the middle.

The regulators also frown on these dividers, because they have tested evacuations from the new triple aisle/quadruple aisle airliner & found that they turn into soccer riots unless entire rows of seats are removed, aisles are doubled in width, emergency exits are doubled in size & number with larger empty spaces around them, supervising cabin crew are increased.

The airlines will not, ever, want an aircraft like that. They want exactly what they have now, but cheaper.

Because it’s only economical for long-range cargo aircraft.

There’s an interview with a Boeing executive discussing the problem with a delta wing airliner here:

Quoting his statements in that interview:

“A BWB works great because it’s got [wing] span. It’s got more empty weight than a tube-and-wing configuration for a revenue ton of cargo. It’s going to carry more operational empty weight. It’s got span and it’s got a fair amount of wetted area.

“A four-hour mission isn’t going to work because you’ve got more weight and you’re not taking advantage of that span,” he said. Long cruise segments are required to make the aerodynamics work to their greatest benefit.

Then, a bit later:

Sinnett that that Boeing’s studies have only shown a few cases in which the economics are better than 20%.

Regarding passenger airliners, he says:

In a BWB, the center wing box is also where the passenger cabin is. The wing box needs to be tall enough to accommodate 95% of the world’s men to be able to stand upright.

Space is required for the carry-on bags. There has to be room above and below the floor for ventilation and systems.

This results in the multiple hundreds of passengers, he said.

Cabin pressure imposes enormous forces on the body of an aircraft. The most material efficient and therefore light weight structure to handle it will be a cylinder (circular cross-section). However, when you add a deck, it can be used to take up some of the tensile load, making other cross-sections possible which become taller and narrower. They might be preferable because of the way the internal volume can be used.

The second deck on the 747 was really solving another problem entirely. There's a good summary of the 747 in this article (and other places, if you search), but what it comes down to is that Boeing built the 747 to also be a cargo plane because they didn't think it would survive as only a passenger jet.

But that introduced a challenge: if you want to ship something that is about the same size as the inside of the aircraft, how do you actually maneuver that thing into the plane? For example, if they had a ramp in the rear, not only will the ramp make you lose floor space, but the size of the ramp and the size of the opening limits the size of what you can fit inside.

Moving the cockpit to a second deck and using a flip-up nose allows you to roll in your cargo straight forward and lets you get something inside that takes up as close to 100% of the available space as possible. For example, this video shows something being loaded into a 747 that would never fit via a ramp or a side door.

I can't find it now (maybe it was in a YouTube video), but I read that it was the 747's first customer, Pan Am, who came up with the idea of using the second deck as first class. Boeing didn't design the second deck with that in mind. It was strictly a decision for cargo.

The A380 was a response to the 747. The Wikipedia article mentions the decision for the second deck there:

The A3XX design converged on a double-decker layout that provided more passenger volume than a traditional single-deck design.

There are references after that sentence if you want to look at that. But I imagine the fact that the second deck on the 747 is "cool" had something to do with it too. But that's just me.

Not the answer you're looking for? Browse other questions tagged aircraft-design aerodynamics commercial-aviation or ask your own question.

10
How is the area rule applied on airliners like the A380?
21
Can a wide body airliner land safely with a full fuel tank?
9
Why can't this blended wing body trijet airliner fly?
11
Aerodynamic advantage of blunt noses and WHY (subsonic)
0
With 77% less wing area than the Lazair Ultralight, how does the Blackfly meet FAA ultralight category requirement of power off stall speed of 28mph?