From what I know so far, simulators can’t simulate this feeling, I’ve heard some say it will never be possible. Is that true? There’s really no way of producing this in a simulation?

They can produce sustained G-forces, by tilting the sim without the occupants noticing. Of course, this tilting of the 1G gravity vector is limited to practical angles of about 45°, producing 0.7G of simulated sustained horizontal acceleration.

Vertical sustained acceleration is a different matter altogether: the 1G is always already there and can only be reduced by tilting the sim, while in manoeuvres with increased load factor we're looking to increase beyond 1G.

Fortunately the inner ear sensors can be tricked to an extent: they are very good at detecting acceleration onsets but get flooded by sustained acceleration inputs. Our brain seems to rely on the inner ear for detecting the first onset of acceleration, then on our peripheral vision to read the motion velocity. So if we heave the sim rapidly and show the movement on the visual, we cannot detect very readily if we're not pressed down by g-forces anymore after some time. 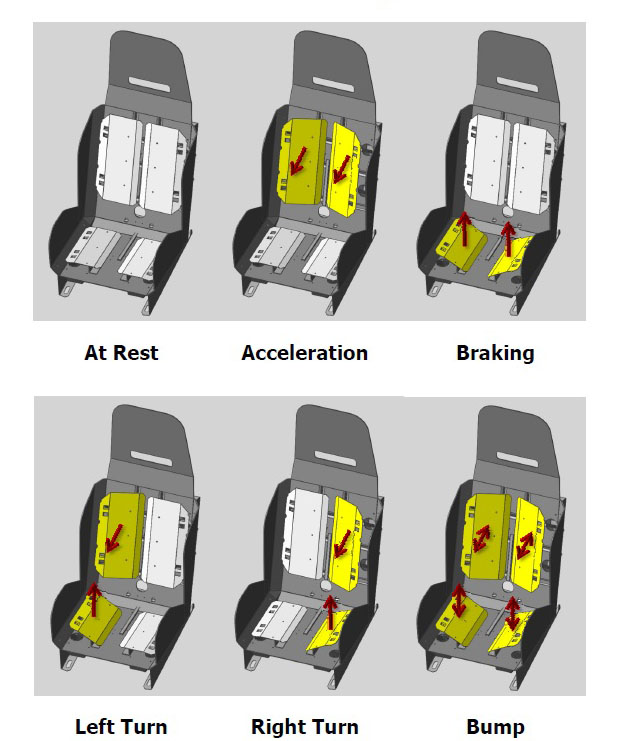 Level D simulators are for civil aviation training, which teaches how to limit load factor. Military sims are a different kettle of fish, as mentioned in this answer. G-seats like depicted above provide cues to our body skin sensors, as do G-suits.

Centrifuges can of course produce sustained g-forces, and they do exist, used by the military to train sustained g flying and by medical facilities to check how long a person can remain conscious. A combination of a centrifuge with a civil 6-DoF system is not really possible for realistic acceleration simulation.

The only G forces the simulator can simulate are sustained lateral forces, which you feel when it tilts, and very limited short vertical and lateral accelerations.

The only vertical accelerations the sim can reproduce are short bump sensations and other brief vertical motions made possible by the ability to of the hydraulic jacks to jerk the machine up or down briefly a few feet. The sim is also good at doing short lateral jerking motions that you would feel when touching down in a crosswind with a bit of crab in.

The sim cannot reproduce sustained turning G force sensations and it can't reproduce the long term turning effects on your inner ear because it can't rotate in a sustained way.

The most realistic effects are the acceleration/braking effects, especially takeoff and landing sensations, and short term vertical and lateral effects meant to simulate bumps and things like flap deployment, and pavement seams, side movements while rolling on the ground, that sort of thing. The most unrealistic effect is the round out and flare to land, because the sim can't reproduce the mild G increase when you pitch up and you get a weird kind of floating sensation in your head when you do it (at least I did).

Because the force simulations are limited, once you've done a fair amount of training in them, you start to become more aware of the odd disconnects between the view on the screen and the seat of the pants sensations, and then you start to become more aware of the faint sound of the hydraulics running outside, which spoils the effect even more, and you're less apt to get mentally lost in it and forget you're not in the real a/c, except when you're put into extreme scenarios that are close to overwhelming your brain.

You could simulate sustained G forces by having the sim gimbal mounted in a massive centerfuge but it's not worth the expense to get that extra realism (they are expensive enough as it is and no airline would pay for it).

The ACME Worldwide Enterprises motion cueing simulator seat CAN produce a G-force affect. They can be used with military or commercial simulators and utilize technologies placed inside a replica seat's back pan, seat pan, shoulder and lap belt harnesses to simulate g-onset and up to 1.8G sustained g-cues. The signal to the seat comes from the aircraft flight (acceleration) model so the signal to the visuals (and platform motion if used) is the same signal to the motion-cueing seat.

Not the answer you're looking for? Browse other questions tagged flight-training flight-simulator or ask your own question.

6
What happens if the pilot tries to do a loop in a full-motion simulator?

7
What is the ratio of actual flight time to simulator time on type for airline pilot training?
10
How does one train for making landings and takeoffs in bad weather?
7
What hardware and software is needed to put together a basic flight simulator?
50
Is this opinion on personal computer flight simulators too strict or is it actually true?
2
What to look for when purchasing a headset
4
What is a "natural flight loop"?
8
What are accurate flight simulation models called? Is there a standard model?
1
With flight dynamic equations, how do I return to positive alpha if alpha is always negative with negative w?