What's the meaning of “the break is a level” in a recovery operation of an aircraft carrier?

When they say "the break is level" it means the altitude is maintained during the turn to enter the pattern, so it is a "level turn".

Here is a graphic that illustrates the level turn, then the descent when established on downwind. 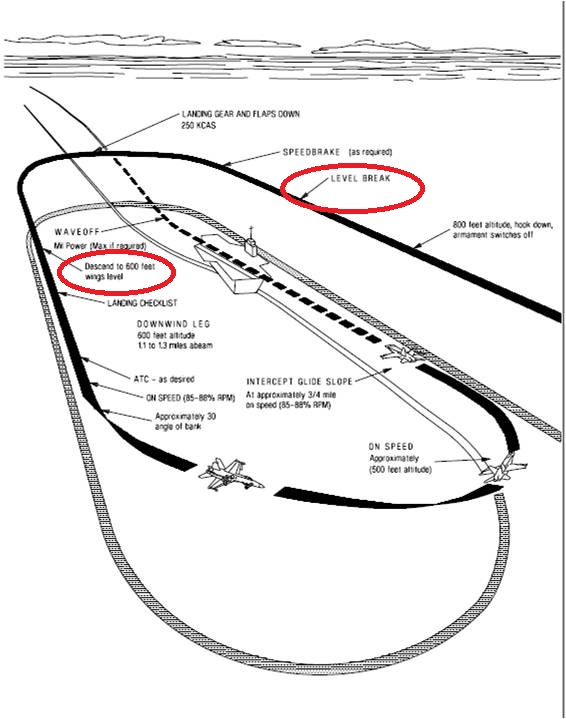 "Level" isn't a noun here--it's not that the break is a level. Level is an adjective describing the kind of a turn. A break is a turn; that turn is a level turn (neither descending nor ascending), and a 180 degree turn, and it is made at 800 feet.

The break is a 180° turn from the upwind to the downwind in the landing pattern which allows for the separation of elements in a formation and spacing of individual aircraft for recovery. Typically the break (for a Case 1 recovery) occurs on the upwind leg at 800 ft AGL, 1 NM DME ahead of the ship, at 350 kts. The lead aircraft breaks formation, turning to enter the downwind with his wingman continuing on in the upwind, making the turn to the downwind 15-18 seconds later. This allows for an approx. 45 second spacing between aircraft in the downwind and final approach legs to ensure spacing for each jet to recover, taxi clear of the LA, and reset the arresting gear for the next jet.

Not the answer you're looking for? Browse other questions tagged landing terminology aircraft-carrier or ask your own question.

8
What does aerodynamic noise of an airliner sound like in landing configuration?
9
Is there a procedure for landing on an aircraft carrier when the tailhook fails to deploy?
5
How should flaps be used during an emergency landing (PPL)?
20
Is is possible to land a midsize commercial plane on an Ford Class aircraft carrier?
8
Is it OK to make an approach without any straight-in segment at all?
12
Where does the altimeter measure from?
39
What's the appropriate course of action if an airliner bounces 5-10 feet on touchdown?
6
Nose gear failure in single prop aircraft: belly landing or nose landing?