How "full-motion" are simulators? Do they just simulate the major motions of the airplane in response to the flight controls, or do they also simulate the minor forces of the flight, such as the vibration from the engines?

Full Motion is full in the sense that it can generate cues in all 6 Degrees Of Freedom: fwd/aft, left/right, up/down, pitch, roll, yaw. The term came in use to distinguish between 6-DOF systems and the earlier 3-DOF systems which only produced pitch, roll, heave cues.

Do they just simulate the major motions of the airplane in response to the flight controls...

They simulate the aircraft response by stimulating the sensations felt by the inner ear, making use of its limitations as also mentioned in this answer. 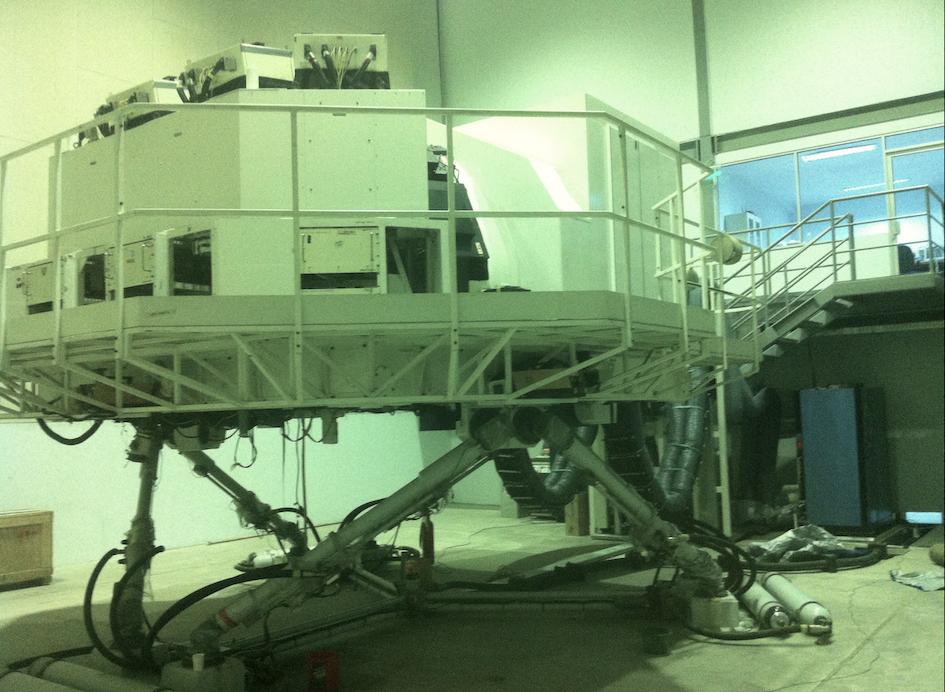 The two side-questions about reproduced vibrations boil down to the frequency response of the motion system: the ability of the system to reproduce commanded vibration signals, as measured at the upper platform with the payload installed. Older hydraulic systems, such as depicted above, had a very limited frequency response - the servo valve opens and oil flows through, creating dynamic flow effects and springiness from the compressibility of the column of oil supporting the payload. Yes, oil is compressible. Maximum perceptible cues up to 5 Hz. 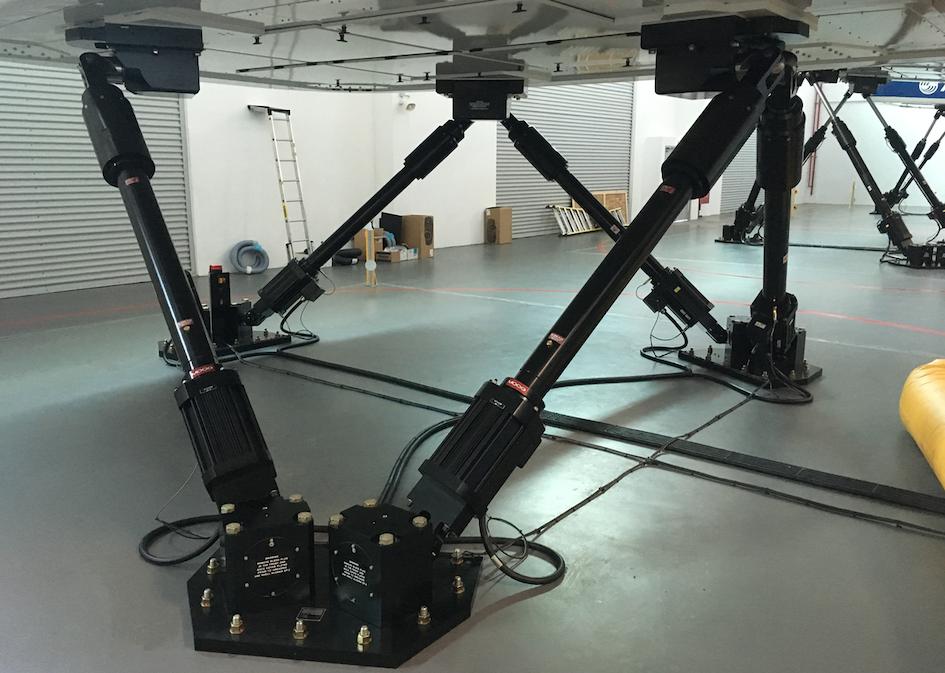 Electric systems have an electric motor at the bottom of the actuator. Electric field creation happens almost instantaneously when commanded and the connection to the upper platform is through the metal screwjacks inside the tubes: frequency response is almost an order of magnitude better than that of hydraulic systems. Maximum perceptible cues up to 30 Hz. Enough for engine vibration reproduction, severity depends on the magnitude of the amplitude.

The issues with reproducing severe vibrations at the motion upper platform are:

Both issues above are not an issue if the constructional design of the cabin etc. has incorporated the vibration inputs. The alarming vibrations are extremely effective training cues, and can be faithfully reproduced by an electric motion system plus suitable cabin construction.

Another way of producing severe high frequency vibrations are by means of a seat shaker or cabin shaker, used in the olden days of hydraulic motion, particularly with helicopter simulators for reproducing the main rotor vibrations. The seats would be mounted on up/down platforms with a stroke of several centimetres, actuated by a separate hydraulic small actuator.

The feel and graphics in a Level D FFS are pretty darn realistic. Even the feel of vibrations of the engine and the motion during taxiing is pretty well approximated. The entire gimbaled capsule shakes, vibrates and moves on electric jacks. One unit will seat 6-8 people. And, you had better use seatbelts. One unit will take up a room the size of a business jet hangar.

If you are in the Dallas area or in Florida, check out http://www.atopjets.com/index.html
They fly B737s and A320/330s.
Tell them Dean from the Dallas June class sent you.

I have not experienced a simulated uncontained engine failure. But, hard landings are pretty realistic.

In contrast, a Redbird full-motion AATD still uses Plane-X 11 software. The graphics and motion are realistic for a video game. It compares to a VR arcade or Disney World ride. The Redbird can spin 360°. But, it has limited up and down motion. The entire system can fit in the master bedroom of your house or apartment.

The main difference between the AATD/FTD and the FFS would be the force feedback of the controls and the tactile feel of the avionics.

Here are a couple of YouTube videos of the American Airlines Full-motion Flight Simulator Level D.

The Shuttle Mission Simulator's (SMS) Motion Base simulator sat on a standard hexapod motion base so it had the usual three translational / three rotational axes. 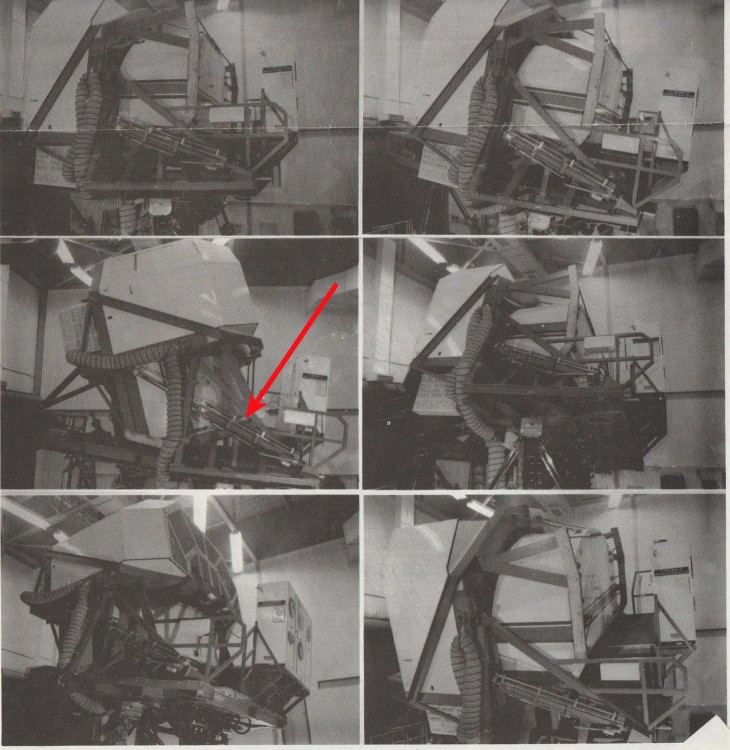 I worked on the motion software some; it was art as well as science. We simulated random vibration from the solid rocket boosters, transitioning abruptly to the smooth liquid-fueled ride on the main engines at solid rocket booster separation.Checking some old notes, we also simulated vibration/buffet due to the following reasons: passing Mach 1, reaction control jet firings, flat tires, and "runway rumble".

We were left in the dust though by the amazing Vertical Motion Simulator at Ames, which was the cockpit on a hexapod, mounted on a trolley which moved longitudinally along a beam, which beam could move vertically! Kind of like an x-y plotter stood vertically. That was one amazing facility, and I treasure the memory of visiting it. But then the crew would come back and say, we want the SMS to feel like that...

A "6 degrees of freedom" motion base still has to cheat, to emulate real-world motion.

For example, it can't do several consecutive rotations about one axis, like an aerobatic airplane flying rolls. I haven't heard of one that can even do a half roll (or half loop) into steady inverted flight.

Translational motion also has its limits. To simulate sustained forward acceleration as with a long takeoff roll, instead of shoving the cab through the wall and across the street, it must eventually pitch the cab nose-up to push you back against your seat. As the forward acceleration eases off, the cab slowly pitches level again. Minimizing the felt effects of this "slosh" (faking translation with rotation) is tricky.

But for conventional within-the-envelope maneuvers, it's good enough that lessons learned in it transfer well to the real world. That matters more than raw physical fidelity.

9
What are the abilities and limits of a hexapod-based flight simulator?

8
How realistic is Google Earth Flight Simulator?
6
Is it really cost effective to put a motion system underneath a Full Flight Simulator?
6
What happens if the pilot tries to do a loop in a full-motion simulator?
4
How do one day simulator courses work?
0
What types of data can be extracted from a non-motion flight simulator?
0
How much simulator training for general-aviation?
3
What were the rules for logging "simulator" instrument time in 1994 (non-full motion)?
2
Have there been accidents involving flight simulators?