I've got a set of data that includes:

I'm looking at some math that is meant to convert these values to AoA and AoS, but I'm having trouble understanding exactly what's going on.

As far as I'm aware, this is basically just taking euler angles and making a rotation matrix and using that to find u,v,w. But I'm having trouble verifying the accuracy of this work (it was done by someone who is no longer with the program.)

What you've proposed is a reference frame translation of the aircraft velocity, so instead of the velocity referenced to East, North, and Up (ENU), it's referenced to the direction the aircraft is pointing. That gives you components of aircraft velocity along the nose, across the wing, and towards the ground. (You can find more details on these conversions by Robert Stengel). It seems like using velocity across the wing and along the nose you should be able to figure out sideslip, but this approximation only holds in situations where wind is much smaller than true airspeed. 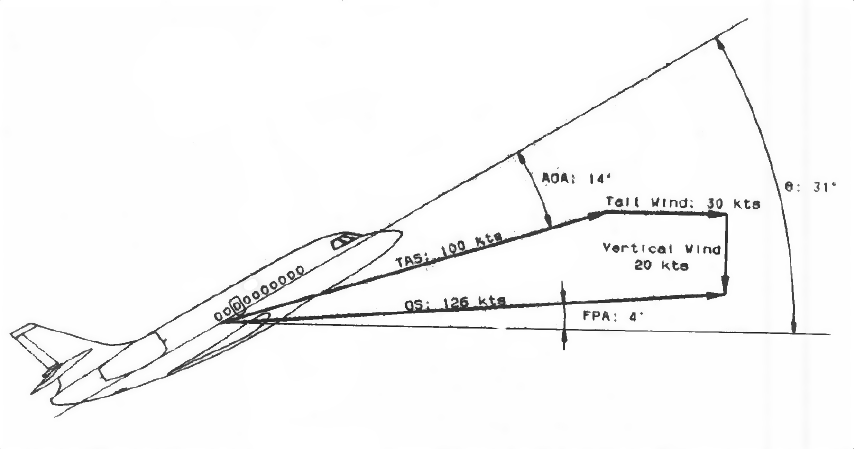 You're assuming here that the motion of the aircraft relative to earth equals its motion through the air. That means your equations may give an unusual angle of attack when there's simply an unusual vertical wind component, or may report the drift angle as the sideslip where there is no sideslip. This assumption of zero wind may be valid for rough approximations or in cases of severely limited sensor suites like a low-cost UAV. This approximation is especially good at high true airspeed, low wind, or if you only care about AOA and AOS derivatives (e.g. for yaw damper control). However there are some cases where this approximation clearly isn't reliable:

Non-negligible wind is the reason that other methods of estimating AOA are used in practice, such as model-based angle of attack using inertial measurements (sometimes called synthetic air data) is sometimes used instead. This is the reverse of what you typically do in an aerodynamics course- instead of using known angle of attack and airspeed to find normal and longitudinal acceleration, you're using known accelerations to find angle of attack and airspeed. Ardupilot has an option to do this based on this paper by Joseph E. Zeis, Jr. Another potential alternative implemented by Tor A. Johansen, et al, in addition to inertial measurements, uses airspeed during turns to estimate the constant wind.

Keep in mind there aren't a lot of cheap AOA sensors for a reason besides manufacturing costs: angle of attack is important, but has limits on its practical applications as AOA cannot be considered in a vacuum. It's usually more important to know your airspeed or acceleration. For example, at high speed if you attempt a high AOA maneuver, the aircraft will rapidly decelerate, and you'd have to lower the nose to prevent the AOA from going into a stall condition. Other limitations are described here.

1
Is it possible to determine if winds were high without groundspeed, wind speed, AoA or AoS?