How can best glide speed be lower than best rate of climb speed?

I was looking up V-speeds for C172. I don't have easy access to an official copy of the POH, but online I found:

But I always thought that $V_y$ is the speed for highest L/D, which should give both highest rate of climb and lowest rate of descent, and that longest glide is achieved by flying slightly faster than that, because drag grows with square of speed, and therefore it initially grows slower than speed above the minimum drag point.

The best glide speed is the speed where tangent line from the origin (zero horizontal and vertical speed) touches power curve (for unpowered airplane).

Best rate of the climb is the highest point of the power curve.

When we start with unpowered airplane, the direct equivalent of best rate of climb is lowest rate of sink. The speed for lowest sink will be clearly lower than the best glide speed.

If we would assume that aircraft engine is a magical device, which simply adds some fixed amount of mechanical energy to the airplane regardless of what, then the "powered" power curve would be simply the "unpowered" one shifted up in the graph. Under such assumptions the speed for best climb would be the same as the speed for minimum sink and in both cases lower than best glide speed. 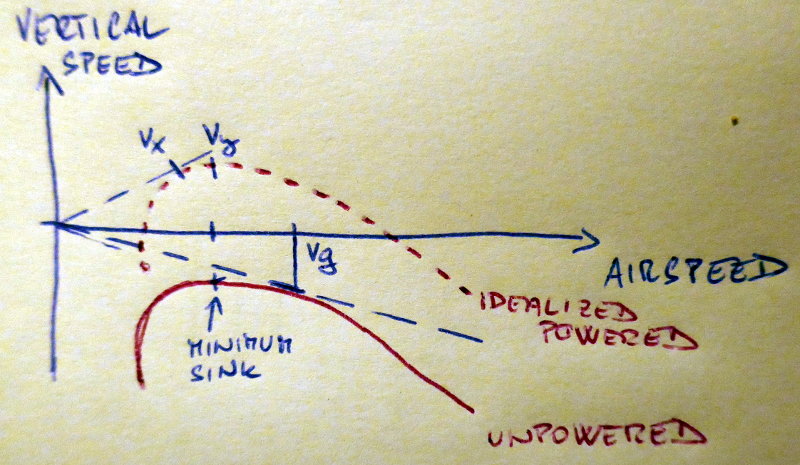 Nevertheless mentioned Cessna converts fuel to mechanical energy through not-so-magical fixed pitch propeller which pushes some amount of air around. Such propeller would be typically optimized for highest efficiency at the cruise speed, so with decreasing speed the amount of available mechanical energy dereases. Which results in changed shape of power curve and maximum point moves towards higher speeds compared to the "unpowered" power curve. 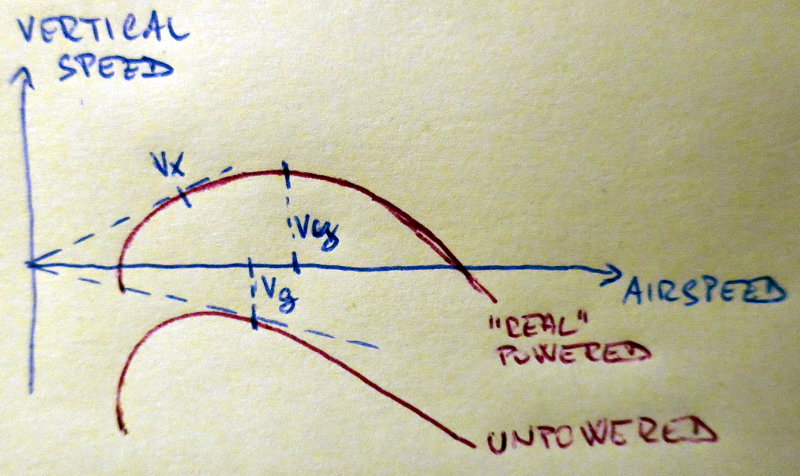 This shift can be high enough that Vy ends up higher than Vg.

The Vy is always higher than the speed for the best climb angle, because these two speeds are found on the same (max power) power curve. For the same reason best glide speed will be always higher than speed for minimum sink. But speeds for best rate of climb and for the least sink does not need to be the same because of effects of real propeller.

For related images and more information, have a look at great online text See How It Flies.

Normally, best climb for propeller aircraft should be when the ratio ${\frac{c_L^3}{c_D^2}}$ reaches its optimum which is at higher lift coefficients than best glide. But that not only assumes a quadratic polar but also a constant propeller efficiency over speed.

A fixed-pitch propeller has its pitch normally selected for cruise so in climb the aircraft will fly slower than what the propeller is designed for. At that speed, propeller efficiency increases almost linearly with speed, as can be seen in the plot below. To create it, I simply calculated the angle of attack and dynamic pressure at 75% span and with that approximated the thrust. Next, I used the same figures for calculating the drag on the blades and thus the power required to drive them at that speed. Dividing thrust times speed by that power produced the efficiency graph. Note that I used the advance ratio (forward speed divided by circumferential speed at the tips) for the X-axis.

The linear increase in efficiency will in effect produce constant thrust over speed, so the best climb speed should be the same as for turbojets.

But that again makes assumptions which might not hold in reality. Obviously, it assumes constant power and prop RPM over speed. If the prop cannot absorb the available power at lower speed, the engine has to be throttled back in order to avoid overspeeding it. I would expect that you cruise that Cessna at a more forward throttle position than what is possible in climb.

Now we have a condition where power and thrust both increase with speed, so the best climb speed is above best glide speed.

Thank you for pointing out this seeming contradiction! It made me reflect my assumptions in deriving best climb speeds and helped me to refine my conclusions.

If we take the curves for power required and power available, the best glide is the airspeed at which a straight line from the origin is tangent to the power required curve.

And the speed for best rate of climb is the airspeed at which the tangents to the power required and power available curves are parallel...

From 'Theory of Flight', by Richard von Mises (Dover Books): 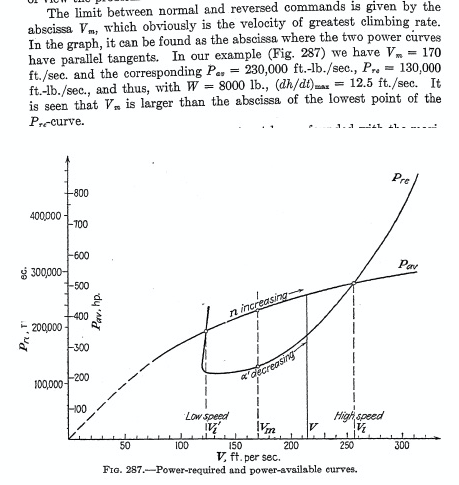 Hence, with properly shaped curves, and in theory at least, the best climb speed might be higher than the best glide speed...

Good answers have been posted, but here is another spin that adds a few other important points, while omitting for brevity some of the other points that have already been made. This answer also clears up a misconception in the original question about the significance of the Lift/Drag ratio in relation to the airspeed for best glide ratio and the airspeed for minimum sink rate.

For unpowered flight, we can draw a curve of sink rate versus forward (horizontal) speed. (Some other answers have referenced this as a "power curve".)

In unpowered, non-turning flight, Lift, Drag, and Weight form a closed vector triangle. Since the Lift and Drag vectors act perpendicular and parallel to the flight path, respectively, this closed vector triangle "anchors" the direction of the flight path in space with respect to the Weight vector. In other words, if we know the direction of the flight path with respect to the ground-- i.e. the glide angle-- then we know the L/D ratio, and vice versa. In fact, in unpowered, non-turning flight, the glide ratio (horizontal distance travelled per unit of altitude lost) is always exactly the same as the Lift/ Drag ratio. This means that glide angle = arctan (D/L).

This means that the smallest (i.e. flattest) glide angle takes place at the minimum D/L ratio.

Starting with a graph of sink rate versus horizontal (forward) speed, there's an easy way to find the "glide ratio", or horizontal distance traveled divided by altitude lost, for any given horizontal speed. It's simply the slope of the line drawn from the origin of the graph to the point in question. The highest possible "glide ratio"-- which corresponds to the smallest possible "glide angle"-- is simply the point where a line drawn in this manner is exactly tangent to the curve of sink rate versus forward (horizontal) speed. And as we've already noted, in unpowered flight, the "glide ratio" at any given forward (horizontal) speed is also exactly the same as the L/D ratio at that speed, so the highest possible glide angle also occurs at the forward (horizontal) speed that gives the highest L/D ratio or lowest D/L ratio.

Recall again that the smallest (i.e. flattest) glide angle takes place at the minimum D/L ratio. For reasonably flat glide angles, as we vary airspeed, lift remains nearly equal to weight, so nearly all the variation in the L/D ratio (i.e. the glide ratio) is due to variation in Drag, not Lift. (Don't misinterpret this to mean that the lift coefficient stays nearly constant as the airspeed varies-- it does not.) This means that for reasonably flat glide angles, it is a close approximation of reality to say that the airspeed that yields the minimum D/L ratio and the smallest (flattest) glide angle, is also the airspeed the yields minimum Drag force, as measured in pounds or Newtons. (Don't misinterpret this to mean that the drag coefficient is minimized at this airspeed-- it is not.)

Therefore, at the forward (horizontal) speed, and the airspeed, that yields the minimum sink rate, the Drag force is actually higher than it is at the airspeed that yields the maximum glide ratio (minimum glide angle). Here's one way to think about this-- loosely speaking, the Drag force determines the steepness of the "slope" that the aircraft is gliding down. But travelling more slowly along a slightly steeper slope will give a lower rate of descent than travelling more quickly along a slightly flatter slope.

What happens if we start with a sink rate-versus-airspeed curve generated by an aircraft with the prop removed, or with the engine generating just enough power so that the prop is contributing exactly zero net thrust, and then we change the conditions so that the prop is windmilling and forcing the engine to turn? The sink-rate-versus-airspeed curve will be degraded-- the sink rate for any given airspeed will be increased, but more so at higher airspeeds. The point of minimum sink rate, and the point of flattest glide, will both be shifted toward the left, toward lower airspeeds.

To maintain level flight, the motor has to supply enough power to offset the sink rate that the aircraft would experience if the motor were contributing zero net thrust. More precisely, the power requirement is equal to sink rate times weight. Therefore our graph of sink rate versus airspeed can also be thought of as a graph of "power required" versus airspeed. However, to look at how an aircraft will perform when we add power, the appropriate "power required" graph would be one generated with the propeller removed (or with just enough engine power applied to produce exactly zero thurst), not one generated with the propeller windmilling.

At any given airspeed and throttle setting (e.g. wide-open throttle), the sink rate or climb rate will be due to the difference between the "power required" and the "power available". At the wide-open throttle position, if the graph of "power available" versus airspeed were a simple horizontal line, then the shape of the "power required" graph-- which is the sink rate versus airspeed graph-- would entirely determine the the airspeed for maximum climb rate. In this case, the maximum climb rate would always occur at the power-off minimum sinking speed-- at least so long as we were talking about a sink rate versus airspeed graph that was created with the prop removed or idling in the zero-thrust condition, rather than windmilling.

However, the shape of the power-available curve is not a simple horizontal line, especially in the case of an aircraft with a fixed-pitched prop. It will typically have a peak that is located well to the right of (i.e. higher than) the airspeed for the best glide speed or max L/D ratio, which biases the speed for best climb rate toward a higher airspeed.

In summary, the best climb rate occurs at a higher airspeed than the flattest glide angle because--

i. The airspeed for max L/D ratio is also the airspeed where the ratio of Cl/Cd is maximized.

Not the answer you're looking for? Browse other questions tagged aerodynamics v-speeds or ask your own question.

13
Where is the 'zone of reversed commands...'?
15
What is the propeller efficiency, $μ_p$, of modern propellers for light sport aircraft?
12
Under what conditions can the maximum angle of climb be achieved for jet and propeller aircraft?
10
In a jet, are Vy and Vx achieved at a constant AOA at all altitudes?
5
How does climb-rate vary with density/pressure altitude?
2
Why isn't Vy lower than the speeds for best L/D ratio and best glide ratio in an airplane with a piston engine and a variable-speed prop?
3
Is V best endurance configuration the best way to save a heavily overloaded aircraft?
0
Is it better to increase speed in a climb?